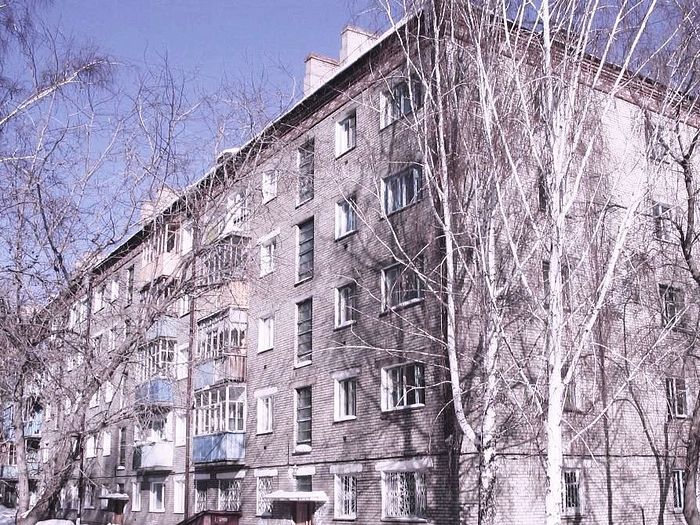 “Hello! Is that you, Holy Father? I... Er... In the church they said that you would come to bless my apartment today,” the caller said faintly and began to indistinctly explain where he lived and how to find him. Finally, entangled in his own speech, the man promised that he would meet the priest at the entrance to the village, and they would go to his building together.

Over the years of his ministry Fr. Dionisy learned to understand people well, or so it seemed to him. “The fact that he called me Holy Father, like a Catholic,” he thought, slowly driving forward in a pre-New Year traffic jam, “indicates his ignorance of Church matters. And, judging by his chaotic speech, he is either an elderly retiree who’s had a stroke or a middle-aged alcoholic.”

Turning off the road, the priest stopped at the agreed place by the side of the road. A pale, strange-looking man dressed in a shabby brown jacket and formal-looking trousers got into the car without haste, and without shaking the dirty slush from the melted snow off his boots. Despite the light frost, the stranger, who introduced himself as Vyacheslav, had no hat on, and his sparse, closely-cropped black hair made his angular, haggard face with a small pointed nose especially expressionless. This nondescript portrait was slightly enlivened by the gaze of his large black eyes, with which the stranger looked intently and suspiciously at Fr. Dionisy without saying anything for a long time, hardly responding to his attempts to start a conversation and only occasionally giving instructions on where to turn.

“He’s probably recently been released from prison or a mental hospital,” the priest thought. He became a little anxious—you never know what to expect from such strange types. “Maybe he won’t kill me, but he’ll surely wear out my nerves.” But he could probably easily kill someone as well...

“Be sure not to park the car at the apartment block entrance because my neighbors are very bad people,” Vyacheslav interrupted Fr. Dionisy’s gloomy reflections.

“Well, now it’s all clear—he’s schizophrenic. Now the main thing is not to let him manipulate me. Once he sees my weakness, anything can happen...” flashed through the priest’s mind.

“In what sense are they bad? Will they puncture my tire?” He asked Vyacheslav, somewhat irritated.

“Of all things! They will scoff at him!” the priest thought. “But the Lord told us sternly: Whosoever therefore shall be ashamed of Me and of My words in this adulterous and sinful generation; of him also shall the Son of Man be ashamed, when He cometh in the glory of His Father with the holy angels (Mk. 8:38).” But before Fr. Dionisy had time to open his mouth to denounce Vyacheslav’s lack of faith, his new acquaintance opened the door, and they entered the apartment, the sight of which so horrified the priest that he could not utter a word.

The walls, floor and ceiling were not covered with dust, but with a thick layer of black-gray, dirty soot. The priest took off his shoes out of habit and immediately regretted it, as his feet sank into a sticky, tar-like substance from which he had to extricate his socks with a loud ripping sound.

“The dwelling of a maniac,” the priest thought and timidly asked aloud:

“Which room are we going to pray in?”

“In this one...” answered Vyacheslav and led his guest into the hall, blocked by a long old table, covered for some reason by a big carpet with overturned stools on top.

“I need a gas flame to light the censer,” Fr. Dionisy said and was horrified even more when he found himself in the kitchen, literally drowning in dust and greasy dirt. Everything there was sooty to such an extent that even the windows, which barely allowed dim daylight into the ground floor, made the tiny space of the Khrushchev-era kitchen dull, like the musty tomb of a notorious sinner. The rings on the gas stove as if stuck out from spilled and frozen meat jelly, abundantly sprinkled with something gray-brown.

“And my wife scolds me for not putting books away,” the priest thought. His fearful indignation gave way to pity for that obviously degraded and possibly sick man who wasn’t needed by anyone.

Having blessed the apartment, Fr. Dionisy began to preach to Vyacheslav, saying that our homes are sanctified first of all by our pious lives, that it is necessary to forgive offenses and be able to make peace with our family members and neighbors, and, of course, pray (using at least a short rule) in the morning and in the evening.

“And the most important thing that the Lord gives us in the Church is the possibility of intimate communion with Him in the Sacraments. When a Christian confesses his sins, we believe that his confession is accepted by Christ Himself, Who heals his soul. When we take Communion, we believe that Christ Himself enters our hearts and dwells there until we drive Him away by our sins. How does this happen? The human mind cannot contain this, which is why it is called a mystery.”

“Why am I telling him this? He doesn’t understand anyway…” the priest thought sadly, and, refusing a crumpled one hundred ruble note, hurried to get out of that gloomy place.

“The saints are in Heaven, but I am a sinner,” Fr. Dionisy replied, and after a little thought added, “You’d better tidy up your home, since it makes one miserable to see it. After all, the Nativity of Christ is coming soon...” 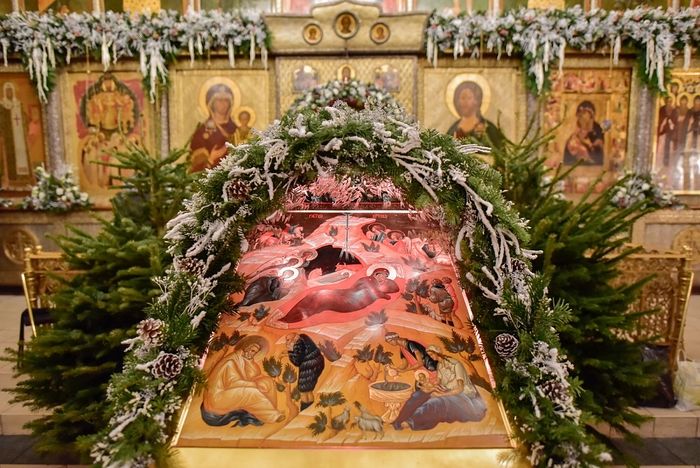 The festive service of the Nativity of Christ always made Fr. Dionisy happy, but at the same time it inevitably wore him out. He was an introvert by nature, and a huge crowd of people caused him if not panic, then some incomprehensible embarrassment. That is why the priest especially liked to serve during Christmastide—the week following the feast of Nativity, when there are far fewer worshipers in church and the atmosphere is more intimate.

The Liturgy that day ended quite early, and when to the festive ringing of bells all the parishioners had dispersed, the priest unvested, went outside, and squinting from the January sunshine on the snow, looked up for a long time at the bell tower—where on these holy days every parishioner was allowed try his hand at bell ringing.

“Hello, sinful father! Happy Nativity!” someone addressed the priest loudly, drowning out the bells with his voice.

Without having time to take offense at such a humbling greeting, Fr. Dionisy saw in front of him a slightly strange man, who looked older than his age and was dressed like a janitor.

“Don’t you recognize me? It’s me, Vyacheslav, whose apartment you blessed recently!”

Fr. Dionisy remembered the cleaning. “You can’t forget that,” he thought. But now, he couldn’t at all recognize in the man before that sad, unhappy person whom he had taken for a prisoner just released from prison. Although he hadn’t changed his clothes, his eyes were shining with joy, and the ruddiness had returned to his pale cheeks.

“Vyacheslav?” The priest asked again incredulously. “Well, did you do the cleaning?”

“Not finished yet... But, most importantly, I followed your advice: I confessed and received Holy Communion. You can’t imagine how much better I feel at heart! At first, after confession, it was like a load had been taken off my heart! And when I took Holy Communion at the night service, I felt so good and joyful that I must confess I thought that the priest had given me some drug instead of Communion...”

The continuous ringing stopped, and now, interspersed with a happy childish hum, small chimes rang in silvery tones. Apparently a bell ringer was showing some schoolchildren how to play along.

Tears welled up in Vyacheslav’s eyes.

“Forgive me for the mess, father... You see, for several years I practically never left my apartment. My grandmother who had raised me instead of my parents died, and I almost lost my mind from grief...”

Vyacheslav stood and talked for a long time about his unhappy childhood and his bitter lot of a disabled orphan who was bullied by all the others boys and who, except for his loving grandmother, had no one in this world.

When his grandmother was younger, they would go to church together on the major feasts, and Vyacheslav still remembers how she taught him to kiss icons and make the sign of the cross. When she got old, she sent him to church alone to submit prayer lists for the repose of his parents who had died of alcoholism, and to bring home some prosphora and holy water.

His grandmother died during Christmas time. On the feast of Nativity she lamented that she had not been to the service for years, and two days later she did not wake up. Her overgrown grandson sat beside her for a long time and could not understand what had happened. Luckily, his compassionate neighbors hurried in. They called an ambulance and helped with the funeral...

So Vyacheslav remained completely alone, until he decided to fulfill before the Nativity of Christ, on the anniversary of his grandmother's death, her old dream—to invite a priest and have the apartment blessed... “To Ensure That the Liturgy be Celebrated in the Land of My Ancestors”
On how a former detective and prisoner became a church warden
Pavel Sushkov
The Royal Martyrs are family saints! To whom if not to them should we pray to for marriage and the preservation of a family, for the peace and prosperity of our land?” Christmas Stories from a Urals Monastery
Olga Rozhneva
That’s how Misha—thin and lanky, with faded eyes and an unhealthy pallor—wound up in the monastery. He looked around the remote monastery in horror, and in his eyes lurked an unchildlike melancholy: He didn’t have his beloved computer here.
Comments