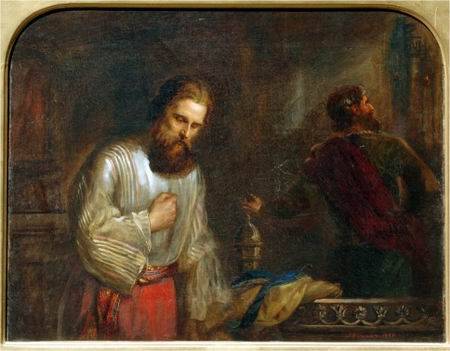 Brenan. The Publican and the Pharisee (1858)

God’s temple—the house of our Heavenly Father—is a house of prayer. He calls His children to it, so that in prayerful communion they would more acutely feel His nearness, His love; so that the warmth of His Fatherly instruction and its power would carry away the difficulties of human life. He sees everyone; the light of His Gospel Truth illumines those gathered there to their innermost depths. This is how it was during the Savior’s earthly life, when the Pharisee and the publican prayed in the enormous Jerusalem temple; so now does the Lord look also upon us standing before Him in prayer, and so shall it be to the end of the world.

But today’s Gospel parable talks about the prayer of only two men—the Pharisee and the publican. Why have they drawn the attention of the All-Seeing Eye? How did they distinguish themselves? It would seem that they had nothing in common with each other. One stood in the foremost ranks of those praying—he was in others’ opinion the first, a righteous man, as well. The second stood by the doors of the temple as the last man before God, and in the opinion of those around him he was an outrageous sinner. The Pharisee lifted his gaze with the prayer: “O God! I praise Thee, for I am not as other men.” But the publican looked down to the ground beneath his feet, and beating his chest, whispered, “God, be merciful to me, a sinner.”

Two prayers to God, two states of soul, two manners of life. Both men are in the temple, both have prayers on their lips, but are both covered by God’s mercy and good will? And do we hear the voice of God, saying, I tell you, this man [the publican] went down to his house justified rather than the other: for every one that exalteth himself shall be abased; and he that humbleth himself shall be exalted (Lk. 18:14)?

The Pharisee speaks madness in his prayer as he stands before God in the temple: I am not as other men are (Lk. 18:11). In these brief words his soul is poured out, laid bare to the fullest and in all its unseemliness; here is self-satisfaction and self-love, degradation and criticism of others, and self-exaltation over everyone. In these minutes, standing before the holy place, he has forgotten God Who loves the righteous and has mercy upon sinners, Who knows our secrets, and is therefore the only one possessing the authority to judge. He forgot that man’s judgment is one thing, but God’s judgment is another. Wouldn’t it be more worthy for him to look into his own heart and whisper aloud to the Lord, “From my secret sins cleanse me, and from those of others save Thy servant”? The narcissistic, self-satisfied Pharisee does not pronounce these saving words. After all, he is not like other men, not like that publican; he’s not an extortioner or an adulterer. And what is his righteousness? I fast twice in the week, I give tithes of all that I possess. And for that God owes him something. God is supposedly indebted to him.

While from the doors of the temple, from a man who does not dare to raise his eyes from the ground, God hears the silent “God, have mercy on me, a sinner.” It is so brief, but with such contrition of heart. And, “A heart that is broken and humbled, God will not despise.” The prayer is accepted, the sinner is justified.

We also, my dear friends, are in God’s temple. Glory be to God! But let us look into the depths of our souls in the light of today’s Gospel. Let’s answer the question: Who are we? What does the Lord say about each one of us?

Today’s story is short but succinct, and it is no coincidence that this word of God sounds forth to us today. The danger of falling into pharisaical self-satisfaction, self-exaltation, and judgment and criticism of other lies in wait for everyone. Only true righteous ones are alien to such temptations, but even they stand on stern watch over their souls so that the enemy of mankind would not be able to find an opening to crawl through there. In us who live amidst the noise of life’s cares, these feelings and views are able to appear unnoticeably and lead us away from the saving path.

No doubt there are good and true Christian qualities in us. We love God’s church, strive to honor every feast day with prayer at the services; but when we see those who have forgotten about church, doesn’t the self-satisfied thought sometimes begin to stir in our souls: “Thank God that I am not like other men”? We console ourselves with prayer, but we can be resentful, irritated, idly curious, self-loving, and can be intemperate in food, or careless about our words. We are industrious but cheap and unsympathetic to the needs of others, and if we are charitable, then we do not preserve purity of heart while giving. We have to see our moral state, and be frightened by what we see; then our hearts will definitely be rent by the cry of the publican: “God, have mercy on me, a sinner.”

We are more often satisfied with our external piety. And the pharisaical “Thank God, that I am not like other men” is if not our prayer, then nevertheless living hidden in the depths of our souls, sweetening our lives with self-satisfaction.

But let us fear even the shadow of “Thank God, that I am not like other men.” Terrible to the soul is self-appreciation; it is destructive to the soul to evaluate others by comparing them to yourself. All that is good in us immediately loses all value and worth before God, and becomes the property of satanic pride. But how is it that both of these prayers manage to live together in our hearts? The publican and Pharisee struggle with each other in our souls, and they struggle with alternating success. And how attentive we have to be so that the prayer that receives no justification from the Lord does not take the upper hand in us. And the Lord’s words, Every one that exalteth himself shall be abased; and he that humbleth himself shall be exalted (Lk. 18:14) do not allow us to forget that true Christian activity is always marked and penetrated with humility and love. In order to protect ourselves from pharisaical high-mindedness before others we have to look dispassionately into our own souls. Because of the self-love inherent in man, we are able to see well our own good qualities, but we are blind and condescending to our inadequacies. Not truly knowing ourselves, we think that we are better than others. But as soon as we begin to examine our own conscience, our own hearts in the light of Gospel truth, we make the important discovery that we are not only not better, but in many ways are worse than many.

When God’s righteous ones fulfilled all that was commanded of them, they called themselves worthless servants, and feared even thinking about their worthy qualities. Apostle Paul said of himself, “I am the chief of sinners.” Apostle Peter wept to the end of his days over the fall that happened with him. The saints watched over every movement of their hearts, every thought, and even judged themselves for thoughts, considering them as sins, as acts committed. Are we strict with ourselves when our thoughts are occupied only with the earthly, and our hearts are weighed down by the lusts of the world?

In order to be freed from the sin of self-appreciation and self-opinion, we must compare our own lives not with others like us, but with those who have achieved perfection. Many people with passions like us have conquered sin in themselves, uprooted all sinful passions, and prepared an abode in themselves for the Holy Spirit. But even they bore on their lips throughout their lives the prayer: “God, have mercy on me a sinner.” And we sinners rightfully bow down before them. So let us try to compare their pure, virtuous lives with our own. For example, someone is pleased in his soul with his peaceful, yielding character; but what is our yielding character in comparison with the humility of St. Sergius? The abbot of a monastery, he did not disdain to earn his daily bread by building a log cell for one of the monastery residents. And he gave thanks to God when the latter paid his spiritual father for his labors with a handful of moldy, dried bread.

We value our prayer rules, and if we sometimes pray more than the rule, we consider it an ascetic labor. But how small and insignificant it will be, even in our own eyes, if we recall the monastic saints who stood nights in prayerful conversation with God and never noticed the time.

We recall St. Seraphim of Sarov and his 1000 days on a rock in his ascetic labor of prayer.

We have overcome one passion that assailed us, abandoned one or another sinful habit, and we’re ready to squirm in our souls with self-satisfaction. But let us remember the saints, the strugglers, who conquered all the passions. Having experienced all temptation and stood firm in the virtues, they preserved the most important thing: humility and purity of love. But if we look at our own selves carefully—virtue lasts until the first temptation. How can we not call out to the Lord with the voice of the publican, “God, be merciful to me, a sinner?

And if we look at the hosts of the saints, if to our gaze is revealed the Cross with the Divine Sufferer on it, and His Mother standing suffering next to Him, then our heart and mind will come to know the path of following Christ and His Most Pure Mother; and in our hearts will always be the ceaseless prayer, “God, be merciful to me, a sinner”.

The publican, a sinner, and the Pharisee, a false righteous one—both of them teach us: “Do not hope in your righteousness, but place all your hope for salvation on God’s boundless mercy, crying out, “God, be merciful to me, a sinner!” And when a man is departing from this earthly veil onto the threshold of eternity, only one prayer will be important and needed: “God, be merciful to me, a sinner!” Amen. We Need a Humble Lent in These Troubled Times
Fr. Philip LeMasters

We Need a Humble Lent in These Troubled Times: Homily for the Sunday of the Pharisee and the Publican in the Orthodox Church
Fr. Philip LeMasters
The disruptions of what we think of as normal life in our society in the last year should open our eyes to the reality of what it means to be human persons in the world as we know it. Two Roads Before Us
Homily on the Sunday of the Publican and the Pharisee
St. Alexei Mechev
The first path of earthly well-being is the path of destruction in eternal life; the second path, bitter and dark here, leads us to the source of light and truth. Words of Madness
Homily on the Sunday of the Publican and the Pharisee
Hieromonk Ignaty (Shestakov)
This mad, self-satisfied state is the most terrible state in spiritual life that could possibly be imagined.
Comments
×