Two Roads Before Us

The publican and the Pharisee came to the church to pray. During his prayer, the Pharisee praised his own deeds and judged others, while the publican, deeply aware of his own unworthiness, prayed like this: God be merciful to me a sinner! (Lk. 18:13). The Lord condemned the former but justified the latter, saying, For every one that exalteth himself shall be abased; and he that humbleth himself shall be exalted (Lk. 18:13). 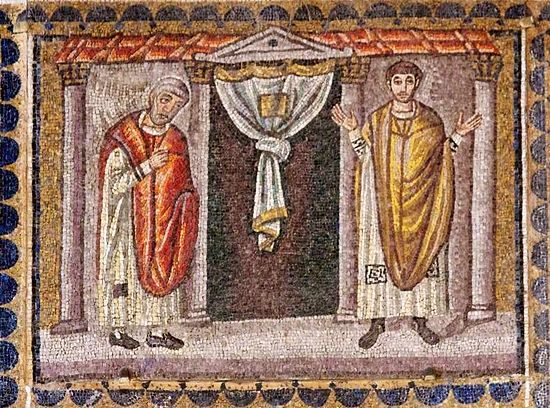 The publican and the Pharisee, Mosaic in Ravenna.

My dear ones, if we look at outward deeds and not at the inward disposition of the soul, then the Pharisee cannot at all be called a bad man. In any case, he was an impeccable man in the secular sense, and outwardly pious. But despite all that, his prayer was rejected. On the contrary, the publican was not without sins and vices. He himself admitted his sinfulness, and yet his prayer was heard. Why is that? Here is why. The Pharisee prayed arrogantly, with a spiritual disposition that brought everything out into the open. After all, in prayer people show just what they really are, and how they live. We can apply the words of the apostle to the life of the Gospel Pharisee and his prayer: Lovers of their own selves, covetous, boasters, proud … having a form of godliness, but denying the power thereof (2 Tim. 3:2–5).

The Pharisee behaved arrogantly toward God. He walked proudly into the temple, stood in front of everyone, where everyone could see him. There wasn’t a trace to be found in him of the appropriate reverence for God in His House, and he treated others with contempt. Considering himself to be righteous, he called other people bad: extortioners, unjust, adulterers—judging by outward actions, falsely and wrongly interpreting them, and not according to the inner disposition of the heart. That is how pride acts wherever it is—it thinks highly of itself, and lowly of others.

The prayer of the Pharisee was a sinful prayer. He gave thanks to God, but without humility or the awareness of his own infirmities—he gave thanks not for having been delivered from serious temptations toward sin and crude vices, but that he was not like all those other people. From his lips was heard the voice of pride, which boasts of his own righteousness and addresses God not with a prayer of repentance, but with a prayer of self-praise. In the Pharisee’s opinion, he had nothing to repent of. In fact, the Pharisee’s entire prayer was addressed to the idol of his own pride. And God did not hear it.

The prayer of the publican was a cry of the soul, which tore forth in humility for his sins and in boldness of faith calling out to God’s mercy for the healing of his suffering and weakness. And God reverently heard him, for He saw a man who needed His help and who admitted his own powerlessness to renew his own nature. Humility made the publican worthy of God’s grace. The publican stood in the back of the temple and did not dare even to raise his eyes to heaven. He did not go up front, although he was a man of status, a collector of taxes, and probably a man of wealth.

There are no differences in church. All have the same rights. The humblest place in the church is entirely sufficient for raising our prayer to the Creator. The publican beat his breast—true, fiery prayer cannot be without some external expression. The inner movement of the heart involuntarily manifests itself outwardly also.

The publican prayed to God for mercy. God be merciful to me, a sinner. His only desire was to receive forgiveness of his sins. In a word, in his prayer the publican showed what he was in deed and how he lived. He prayed with humility, and “he who humbles himself shall be exalted”.

My dear ones! There are two roads before us in life: We either walk in the Pharisee’s footsteps to our own comfort, outward respectability, to everything that feeds ambition and delights our pride, or we follow after the publican with his contrite heart and humble spirit, which make him lower his eyes in shame before his living conscience and beat his breast in contrition.

The first path of earthly well-being is the path of destruction in eternal life; the second path, bitter and dark here, leads us to the source of light and truth.

Flee pharisaical pride, which tempts people and casts them down into destruction, making them blind. After all, the blind man does not see where he is going and stumbles. Isn’t this an image of our modern life? Our blindness is in that we think we see, and our sin remains in us! Phariseeism is our ruinous blindness. All pharisees! Abandon your pride, come with the humble publican to Christ—and in Him you will find enlightenment.

From: An Elder in the World. Holy Righteous Alexei Mechev. Life, letters, sermons, and notes on books [in Russian] Words of Madness
Homily on the Sunday of the Publican and the Pharisee
Hieromonk Ignaty (Shestakov)
This mad, self-satisfied state is the most terrible state in spiritual life that could possibly be imagined. Preparing for Lent with Humility: Homily for the Sunday of the Pharisee and the Publican in the Orthodox Church
Fr. Philip LeMasters

Preparing for Lent with Humility: Homily for the Sunday of the Pharisee and the Publican in the Orthodox Church
Fr. Philip LeMasters
It is only by knowing the depths of our brokenness that we will be able to embrace personally the heights of the Lord’s humble, suffering love, which is well beyond our full rational comprehension. The Publican and the Pharisee on a Commuter Train
Priest Dimitry Vydumkin
A malicious looking man sitting by the window in the back of the carriages—he looked like a scientist and wore a pair of glasses—suddenly burst out screaming at the tramp, “You, scumbag! You’re panhandling, asking for money! And I don’t have enough money to feed my family.
Comments
×