The Lesson of Sebaste 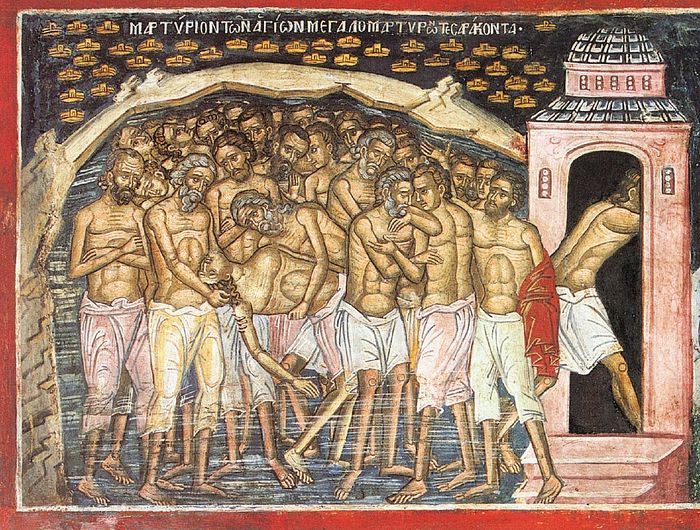 At the beginning of the fourth century, the Roman emperor Licinius ordered that all Christian soldiers who would not renounce Christ be put to death. In Armenian Sebaste, located in modern Turkey, forty soldiers who remained true to Christ were seized and placed undressed on the ice of a frozen lake for an entire night. On the shores of the lake, just opposite the confessors, there was a heated bathhouse. One of the soldiers could no longer endure the winter cold and ran for the bathhouse, but he fell down dead at its threshold. A little later one of the guards saw golden crowns descending from heaven upon the remaining martyrs; and shouting, “I too am a Christian!” he threw off his clothing and ran to join the punished ones—and so he was made worthy of a martyr’s crown. Thus, the one who renounced Christ lost both this earthly life and eternal salvation, while the one who resolved to die for the Lord inherited eternal blessedness.

What lesson can we learn from the example of the Martyrs of Sebaste? It would seem that there are no open persecutions against Christians in our country today. We are not threatened with death or other repressions for confession our faith. But nevertheless, we can say for sure that the example of the Forty Martyrs is relevant in the life of every Christian throughout all times.

We may not be threatened with death, but we are often faced with a choice: to keep the commandments or to violate them for the sake of a fleeting advantage. A motive for violating the commandments could be material gain, comfort, not wanting to enter into conflict with those around us, fear of our superiors, or even the danger of losing a job.

If we relate attentively to the events of our lives, then it is not hard to notice that in those situations where we decided to keep God’s commandment to the detriment of our earthly advantage, we not only preserved our faithfulness to God’s will and through this, peace in our souls, but often even the material losses were either insignificant (less than expected), or we were soon compensated.

If we chose earthly gain to the detriment of the commandment, then strange as seems, we lost both, just like the soldier who died on the threshold of the bathhouse.

In choosing God, we gain incorruptible riches. Moreover, the Lord leaves us the earthly goods we need.

By trying to hold on to matter but stepping away from the Creator of matter, we lose everything.

And we can be sure that if in when we are faced with a choice we remember the example of the Forty Martyrs of Sebaste, then our chances of making the right decision will increase significantly. Life With Christ
A Homily on the Day of the Forty Martyrs of Sebaste
Archpriest Alexander Shargunov
From the very beginning, the Church saw in this image that which determines the life of every Christian and the life of the whole Church at all times. In one way or another, we find ourselves before this choice.

Sermon for the Feast of the Forty Holy Martyrs by St. Theodore the Studite
St. Theodore the Studite
For the rest then, brethren, let us strive, let us struggle by the grace of Christ not to shame those things that have been previously mentioned: the banishments, the imprisonments, the scourgings. We may not all have been imprisoned, nor all scourged; but nevertheless the fellowship of life itself becomes a fellowship of sufferings, for if one limb suffers, all the limbs suffer with it; if one limb is glorified, all the limbs rejoice with it (1 Cor. 12:26). The Holy Forty Martyrs—"Winter Is Harsh, but Paradise Is Sweet!"
According to the tradition about the Holy Forty Martyrs, as they were suffering in the freezing lake, they strengthened themselves and one another by saying “Winter is harsh, but paradise is sweet!” This captures the spirit and essence of Christian martyrdom, which always sees the experiences of this world in the light of the heavenly kingdom.
Comments
×