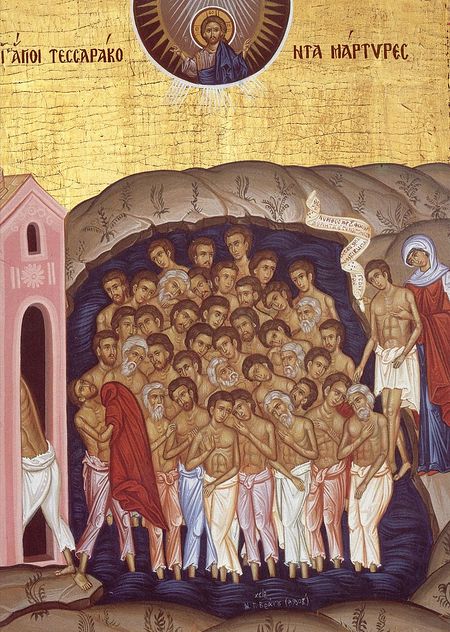 The Holy Forty Martyrs of Sebaste were soldiers who served under the Emperor Licinius in the early 4th Century. While St. Constantine had come to power at that time, and Christians had begun to enjoy greater freedom, Licinius, who ruled at that time in the Eastern part of the Roman empire, continued to persecute Christians. These forty valiant soldiers not only served bravely in the army, but were also courageous in their confession of faith in Christ. Because they refused to sacrifice to idols, they were sentenced to death. At first they were stoned, but the stones were miraculously turned aside and didn’t hurt the martyrs. So, instead, they were thrown into a lake during freezing weather, as the lake was icing over.

In order to tempt the forty men to leave the lake and deny Christ, the soldiers who were guarding them built a bath house next to the lake. In fact, one of the 40 soldiers did lose courage, and ran to the bath house. But one of the guards who was watching at that time, saw 40 crowns descending from heaven onto the heads of the 40 men, then saw the crown belonging to the soldier who left the lake rising back up to heaven. That guard then took off his clothes, told the other guards that he was a Christian, and ran to the lake to join the remaining 39. Thus the number of martyrs remained 40, with that guard joining their ranks.

Although the Lord granted those faithful men consolation and encouragement - they saw a divine light and felt themselves mystically warmed - they eventually yielded their souls into God’s hands in the freezing lake. The bodies of the martyrs were burned by the Roman authorities, and then thrown back into the lake. But Christians later collected their remains and glorified them as Saints. From that time they’ve been honored as among the greatest heroes of the Christian faith.

According to the tradition about the Holy Forty Martyrs, as they were suffering in the freezing lake, they strengthened themselves and one another by saying “Winter is harsh, but paradise is sweet!” This captures the spirit and essence of Christian martyrdom, which always sees the experiences of this world in the light of the heavenly kingdom. We know, because the Lord has taught us, that we can expect “tribulations” in this world. But He also tells us to “be of good cheer,” because He has overcome the world. Whatever sufferings may come in this world, as St. Paul says, cannot be compared to the glory of the Kingdom.

A Saint of more recent times, Papa-Dimitri of Greece, who suffered persecution during the difficult time of the Greek Civil War, remembered this saying of the Forty Martyrs as he shivered all night in wet clothes in a freezing attic, hiding from the communist soldiers who wanted to force him to take their side. He got through the night by repeating “Winter is harsh, but paradise is sweet.” And God strengthened him, so that in spite of so many threats and attempts to persuade him, and so many other hardships, he never agreed to capitulate with the communists, but boldly opposed them and remained faithful to Christ.

The Saints are our support, both by their prayers and by their example. The Holy Forty Martyrs, and countless others, are cheering us on as we run the race. They form that great cloud of witnesses who encourage us to continue following the path of Jesus, the “author and finisher of our faith.” The Church gives us our Lord’s example, and along with His, the examples of these martyrs and so many others, so that we not become weary and fainthearted as we continue our journey through this Lenten season, and as we endure all the trials of our life.

Even if our small measure of faith seems to fall far short of the great measure of faith we see in the holy martyrs, we are nevertheless continually presented with the opportunity to live more faithfully, more “martyrically.” The Gospel passage for this feast gives us the parable of the landowner who hires workers throughout the day. Even those who come at the 11th hour receive their wages from the landowner. Likewise, the Roman guard who saw the crowns descend from heaven and ran to join the other 39 martyrs in the lake received his crown, although he was joining them at the last minute. And likewise, we who have procrastinated and put off taking our faith more seriously and being bolder in serving Christ, if we will choose to do so today, will be blessed.

The Lord will not fail to honor our efforts, however feeble, despite all our sinfulness, to serve him even now. But we must not put off doing so to another day. “Now is the accepted time, today is the day of salvation.” No, we do not like the thought of enduring the freezing lakes of this world - of suffering the discomfort and inconvenience that test our love for God and others. We sometimes face difficult decisions that pit our comfort against doing the right thing. But, with the Holy Forty Martyrs, let us say, “Winter is harsh but paradise is sweet!” Through their prayers, may God enable us not to procrastinate any longer, but to courageously embrace the Gospel of our Lord Jesus Christ. Amen. What Martyrdom Looks Like
A Coptic icon artist honors the 21 Christian martyrs murdered by ISIS in Libya.

Homily Concerning the Forty Martyrs
St. Gregory of Nyssa
I believe that persons who have undergone many harsh experiences can give us encouragement because the sufferings which they and others have endured are a source of special joy. A shepherd rejoices when he sees his abundant flock gathered together; although his pen is large, he expands it to accommodate a large number of sheep. Similarly, Peter saw a throng gathered about the Lord and exclaimed, Master, the crowd surrounds you and presses upon you (Lk. 8.45). Fascinating Facts Behind the Forty Martyrs of Sevaste

Fascinating Facts Behind the Forty Martyrs of Sevaste
Too Incredible to Be True? Are we really supposed to believe that forty men in the prime of life voluntarily undressed to die by freezing? Is this just a legend? Actually, the story is as solid as ancient history gets. In Memory of the Forty Martyrs of Sebaste—A.D. 320
Commemorated March 9/22
During this time they prepared themselves for the trial of martyrdom. One of them, Cyrion by name, exhorted his fellow soldiers: "God so ordained that we made friends with each other in this temporary life; let us try not to separate even in eternity; just as we have been found plea sing to a mortal king, so let us strive to be worthy of the favor of the immortal King, Christ our God."
Comments
×