St. Theophan the Recluse on education, atheism, and revolution

On June 29, on the commemoration of the translation of the relics of St. Theophan the Recluse, the Holy Dormition Vysha Monastery celebrates the memory of the holy hierarch, and a multitude of pilgrims gather there. It is fair to say that anyone who has been even once in Vysha will always return. After all, even St. Theophan, when he visited Vysha for the first time, felt such grace there that after a few years he returned to become a great recluse and man of prayer for the whole Orthodox world. 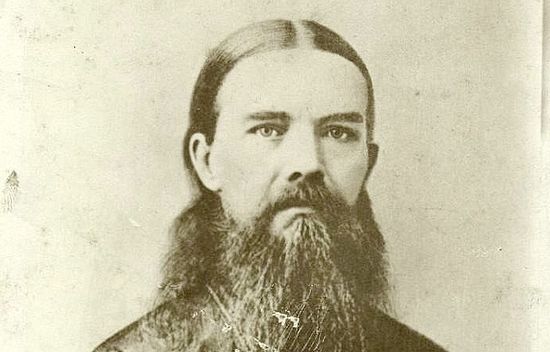 St. Theophan belongs to the category of saints who only fully reveal themselves in our modern times. During the soviet years his works were not published, and therefore the circle of people to knew and venerated the holy hierarch [in Russia] was not broad. Thanks to the works of Archimandrite Giorgiy (Tertyshnikov), who began collecting and studying St. Theophan’s spiritual heritage, materials were gathered for his canonization [by the Moscow Patriarchate]. And in 1988 at the Local Council of the Russian Orthodox Church, the saint was glorified.

While in reclusion, St. Theophan followed with great attention all the events that were happening in Russia and the world. He considered that the foundation for preserving the nation was the Orthodox faith and diligent service to the fatherland.

In reading the sayings of St. Theophan on contemporary society, education, and upbringing, we are surprised and amazed at how relevant and pressing his words sound for modern man. The saint lived in times when freethinking and liberal ideas were being broadly disseminated in society. The liberals, just as today, were proclaiming “faith in man” and “freedom”, demanding “equality and brotherhood”, organizing demonstrations and parades, and shaking the nation’s foundations in any way they could.

The process of degradation in society begins, as a rule, with the destruction of education. Just as a hundred years ago, we are often trying on “suits sewn in the Western manner”, becoming simpletons who do not understand our own native heritage:

“All of today’s Western education … is permeated with pagan principles that are at enmity with Christianity. All who come into contact with it and affiliate with it even in the least become, to a greater or lesser degree, enemies of Christ.”

St. Theophan considered any infatuation with the West to be dangerous not only for a person’s faith and morality, but even for the entire Russian nation. In this context, the call rings out with particular acuteness in his homily, “On the Protection of the Mother of God” delivered October 1, 1863:

“Stop living like the French and the heterodox and again take on a pious, Orthodox Christian life!”

With deep anxiety the saint wrote about the spread of faithlessness in Russian society:

“Sorrowful is not only the perversion of morals, but also the apostasy from the manner of confession that is being ascribed to Orthodoxy. Has there ever been in the Russian language blasphemy against God and His Christ?! But now people not only think it but also speak it, and write it, and print much that is theomachic. Do you think that this will remain without consequences? No. He Who lives in the heavens will answer us with His wrath, and will wipe us away with His fury.”

Many of the saint’s words, filled with bitterness and pain for Russia, sound truly prophetic if we recall the terrible events that swept against Russia at the beginning of the twentieth century. Rejection of God, forgetfulness of the Church, apostasy from the faith—according to the saint’s thoughts, shake the nation’s foundations and lead to its destruction. Here are some lines from a letter he wrote in 1881, written only a few days after the murder of Emperor Alexander II:

“How did the French Revolution happen? First, materialistic views were spread. They shook people’s Christianity and general religious convictions. Then came rampant unbelief. “There is no God; man is just a glob of mud; there’s nothing to expect beyond the grave.” Regardless of the fact that a glob of mud can be trampled down by all, they spouted off, “Don’t silence us!” “Don’t touch us!” “Give us freedom!” And they gave it to them! Demands ensued—somewhere reasonable, then half-crazy, and then insane. And everything got turned upside-down. What about us?! Materialistic views here are becoming more and more predominant and mainstream. They haven’t yet taken power, but they are taking it. Unbelief and immorality are also spreading. Demands for freedom and criminality are being freely expressed. This would mean that we are on the path to revolution. What should we do? We need to cut off free expression of such things—shut the mouths of journalists and newspapers. We should proclaim unbelief to be a state crime, and forbid materialistic views under penalty of death.”

Some of the saint’s contemporaries accused him of excessive strictness and a lack of dialogue with apostates. It is well known how heatedly and decisively the saint spoke from his reclusion against the Pashkovites,1 against the religious-philosophical teachings of Lev Tolstoy—about whom he wrote: “He has no God, no soul, nor anything holy.”

Today there are also voices calling us to “soften” moral norms even to the acceptance of depravity and perversion, which are waging war with the Church because it protects its flock by calling depravity and perversion by their true names. The saint explains that “strictness” belongs not to him but to Christianity, which “must abide eternally and unchangeably.”

In 1954, for the sixtieth anniversary of the saint’s repose, Bishop Averky (Taushev) wrote a book with the telling name: The Proclaimer of God’s Punishment upon the Russian People, in which he noted the holy hierarch’s extraordinary gift of perspicacity. “While living in the depths of his reclusion, … [St. Theophan] could see with his spirit the terrible catastrophe gathering against the Russian people who were wavering in their Orthodox faith, and could feel in his bones that horrible, bloody abyss into which they were falling headlong. Everything that Bishop Theophan forespoke, as we can see now, came true…”

1 The Pashkovites, also called “Redstockists”, were one of the first communities of evangelical Christians in Russia. The movement of evangelical Christians in Russia arose under the influence of the preaching of Lord G. V. Redstock, who arrived in St. Petersburg in 1874 at the invitation of the Russian aristocracy. Soon after V. A. Pashkov became one of Redstock’s followers, sermons began to be given in Russian, which led to a significant expansion Redstock’s audience (Great Russian Encyclopedia). Self-Pity Corrupts Everything We Do
St. Theophan the Recluse, on the Path to Christ

Self-Pity Corrupts Everything We Do
St. Theophan the Recluse, on the Path to Christ
Priest Pavel Serzhantov
All of St. Theophan’s life was a path to Christ. Why is that so? The saint well understood that mankind’s first parents chose the path of sin, and all our problems proceeded from this. “Man fell and perished in his fall. For his salvation the Only-Begotten Son of God came to earth and showed the path of salvation.” How Dostoevsky Predicted What Would Happen with Russia in Fifty Years
It’s amazing how Dostoevsky’s presentiment predicted the Russian revolution. Anthony6/30/2022 3:24 am
"It is well known how heatedly and decisively the saint spoke from his reclusion against the Pashkovites (evangelical Christians in Russia),..." A short letter by Saint Theophan on this topic has been translated into English, entitled, "Preaching Another Christ", and published by Orthodox Witness, www.orthodoxwitness.org/preaching-another-christ The Saint writes to a faithful Orthodox Christian whose community is being lured away by the words of a roving Evangelical preacher, and he gives warnings and counsels. The publisher offers free copies to those who need them.

JohnF6/30/2022 1:08 am
Some other wonderful quotes from St Theophan I have saved, may we have his intercessions! >> No matter how absurd the idea of the toll-houses may seem to our 'wise men,' they will not escape passing through them." >> You ask, will the heterodox be saved… Why do you worry about them? They have a Saviour Who desires the salvation of every human being. He will take care of them. You and I should not be burdened with such a concern. Study yourself and your own sins… I will tell you one thing, however: should you, being Orthodox and possessing the Truth in its fullness, betray Orthodoxy, and enter a different faith, you will lose your soul forever. >> There will be a part that holds the true faith as it was passed down by the Holy Apostles and is preserved in the Orthodox Church, but even of these a not inconsiderable part will be Orthodox only by name, but in their hearts they will not have that order that is demanded by faith, but they will love the present age. Although the name of ‘Christian’ will be heard everywhere, and everywhere there will be seen churches and church orders, all this will be only appearance, while within there will be complete apostasy. On this soil the kingdom of the Antichrist will be born – and it will grow in the same spirit of appearance. (Interpretation of the Second Epistle to the Thessalonians) >> “Do you know what bleak thoughts I have? And they are not unfounded. I meet people who are numbered among the Orthodox, who in spirit are Voltairians, naturalists, Lutherans, and all manner of free-thinkers. They have studied all the sciences in our institutions of higher education. They are not stupid nor are they evil, but with respect to the Church they are good for nothing. Their fathers and mothers were pious; the ruin came in during the period of their education outside of the family homes. Their memories of childhood and their parents’ spirit keeps them within certain bounds. But what will their own children be like? What will restrain them within the needed bounds? I draw the conclusion from this that in one or two generations our Orthodoxy will dry up.” >> "You are already under anathema if you philosophize against the Church and persist in this philosophizing." >> “I shall repeat again: Maintain the conviction that our disorderliness is not natural to us, and do not listen to those who say, ‘It is no use talking about it, because that is just how we are made, and you cannot do anything about it.’ That is not how we are made, and if we undertake to cure ourselves, then we will be able to do something about it.” >> Thoughts for each day: Monday. [Rom. 7:1-13; Matt. 9:36-10:8] Sending the holy apostles to preach, the Lord commanded them to call everyone, saying, The Kingdom of Heaven is at hand, that is the Kingdom has come—go to it. What ought we to preach? We should cry to all, “sons of the kingdom! Do not run from the kingdom into bondage and slavery,” because they are running. Some are captivated by freedom of mind. They say, “we don’t want the bonds of faith and oppression of authority, even Divine authority; we will figure things out and make up our minds for ourselves.” So they made up their minds. They built fables in which there is more childishness than in the mythology of the Greeks—and they magnify themselves… Others are enticed by the broad path of the passions. They say, “we don’t want to know positive commandments, nor the demands of conscience—this is all abstract: we need tangible naturalness.” And they have gone after it. What has come of it? They have bowed down before dumb beasts. Has not the theory that man originated from animals arisen from this moral fall? This is where they have gone! And everyone runs from the Lord, everyone runs… >>
×