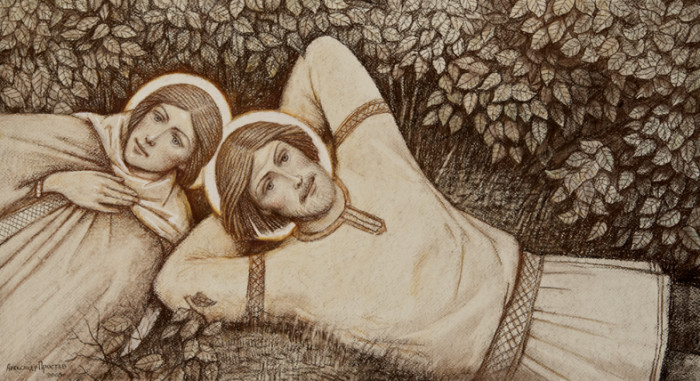 Saints Peter and Fevronia of Murom. Painting by Alexander Trostev.

The popular Russian holiday of the Day of Family, Love, and Fidelity, celebrated on the feast of Sts. Peter and Fevronia of Murom, is now a federally recognized holiday.

“In order to preserve traditional family values and the spiritual and moral education of the children and youth, I decree to establish the Day of Family, Love, and Fidelity and celebrate it on July 8,” reads the text of the decree signed by President Vladimir Putin on June 28, reports Patriarchia.ru.

The Orthodox Church honors the memory of the Right-Believing Prince Peter and Princess Fevronia, named David and Euphrosyne in monasticism, the miracle workers of Murom, who are recognized as the patrons of marriage on July 8.

The Day of the Family, Love and Fidelity was established on the initiative of the Murom townspeople in 2008 and supported by Svetlana Medvedeva, the wife of then-Prime Minister Dmitry Medvedev. The establishment of this feast was approved by the Interreligious Council in Russia and supported by Russian regions.

Since then, it has been widely celebrated in all cities of Russia, and now it is officially recognized as a state holiday.

Read about Sts. Peter and Fevronia, the patron saints of marriage, the in articles, “Loyalty and Love,” by Archpriest Artemy Vladimirov, and, “They Lived Happily and Died on the Same Day,” by Archpriest Pavel Gumerov. Sts. Peter and Febronia of Murom Why Peter and Febronia?
Elena Fetisova

Why Peter and Febronia?
Elena Fetisova
Why was it Peter and Febronia that became revered as the patrons of marriage? This “loaded question” is asked not only by atheists, but even the faithful sometimes marvel: “They were even childless!” And unbelievers sometimes mock them, each in his own way.

They Lived Happily and Died on the Same Day
Archpriest Pavel Gumerov
he task of family as “the little church” is the same as that of the universal Church—to enter into the Kingdom of God the Father together. It is not without reason that the apostle Paul says: Charity never faileth (1 Cor. 13:8). An attribute of true love is that it lasts forever.
Comments
×