Optina Elders on Family Life and the Upbringing of Children 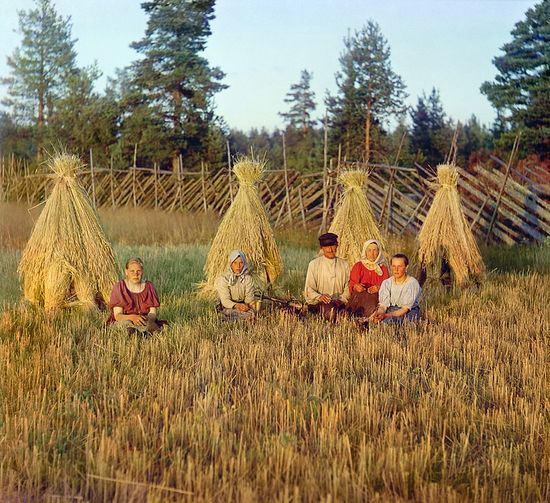 The elders of Optina offered spiritual guidance not just for monastics. They didn’t leave lay people without spiritual instruction. Their advice would often relate to matters of family life and the upbringing of children, and the essentials of life in the world.

The Venerable Confessor St. Nikon wrote that every kind of Christian life has its own virtues and pursuits:

“The pursuits of those who lead a different lifestyle are alien to us. For example, a mother with nursing infants cannot attend all church services every day or pray for long periods of time at home. Not only it would lead to discontent, but even to sin, if for example in the absence of his mother an unsupervised child hurts himself or, as he grows older, does mischief.

A mother cannot completely abandon her possessions for the sake of personal ascetic labors, because she has an obligation to support and feed her children. She must please God by deeds that are appropriate to her—by being patient in bearing the burden of family life, praying according to her possibilities, giving reasonable alms, teaching and bringing up her children, keeping the fasts, attending church on feast days, refraining from grumbling and gossip, etc.”

“For a woman, marriage is service to the Most Holy Trinity... This is how great is a woman’s work as a wife and mother.”

The elders offered advice on how people should find a partner in life.

For example, many lay people asked for Elder Leo’s blessing before getting married. As a result, the marriages that received his blessing were known to have stability and success.

St. Leo would typically advise those seeking his blessing to marry that they consider every favorable and unfavorable circumstance. For example, they should pay attention to whether “both the bridegroom and the bride were in good health, had some means of subsistence, and were more or less equal in social status and age.”

At the same time, the elder would repeat a simple ancient proverb: “A boot’s for the boot, but the bast shoe is for the bast shoe.” Moreover, he admonished girls seeking advice on how to choose a husband to pay attention to the character traits of the man’s father; and he counseled those seeking a wife to see what the girl’s mother was like. He used to say: “The apple does not fall far from the tree.”

Finally, he would advise that the prospective bride, groom, and their parents should ardently pray, and ask themselves if it generally feels good. If both, along with their parents, were at peace about making the final decision on marriage, the elder advised to go ahead. On contrary, if they had the slightest doubt or unaccountable fear, felt anxiety or unease, the elder would usually say that it was a sign and advised them to look for another bridegroom or a bride. This was Elder Leo’s general advice to all.

But because of his God-given gift of clairvoyance, he himself would often give advice that differed from general public opinion or rationale. One day, a man of modest means visited the elder and told him that three different men were courting his daughter—one from the lower middle class, another a factory worker, and the third a wealthy peasant—and sought his advice as to whom he should give his daughter in marriage. Elder Leo advised him to have her marry the wealthy peasant, saying that she would be better off with him. Soon after that, a lean year arrived and the father of the bride returned to thank the elder for his advice to give his daughter to the farmer. He helped him to subsist during the famine; and the father also added that the two other suitors nearly died from starvation. Aside from never going hungry, the newlyweds were happy in marriage.

St. Ambrose advised never to rush with the question of marriage, but instead contemplate it carefully in all its aspects:

“It won’t hurt if you take a good look and make inquiries about that person with whom you think to find temporal happiness. In addition to personality traits, think carefully about his social position and the very circumstances that surround him. All of this as a whole is of great significance. According to some accounts, even the person’s last name can occasionally imply a favorable or unfavorable quality.”1

Here are a few other suggestions from Elder Ambrose to those deciding to get married.

“You are seeking advice and blessing from me, a sinner, whether you should enter into lawful marriage with your bride of choice. If both of you are healthy, if you like one another, if your bride is an honorable young lady, and her mother is kind and never too fussy, then you may enter into marriage with her.”

“If your son is healthy, hasn’t vowed to be a monk, and wishes to get married, then it is possible—may God bless him. As for the bride’s humility, think about it this way. If the mother of the bride is humble, then the bride should also be humble, as, according to the old proverb, ‘The apple does not fall far from the tree.’ ”

St. Hilarion admonished those who wished to get married that they must not marry without the consent and blessing of their parents or family elders; but there should never be coercive persuasion on the part of the elders. A couple entering into marriage should have a liking for each other and, when choosing a bridegroom or a bride, they should pay attention not to their financial status, but whether they, along with their parents, live piously and have good morals.

Then, the elder said, you can hope that the young couple will live happily. The elder did not approve of a large age gap, because it could be the cause of great many sorrows in the future. It is possible for a man to be slightly older, but an older wife can bring a great deal of grief. He didn’t approve of marriages based on passion, because once it subsides, love will eventually die off. Neither did he approve of marriages between people of different faiths; since husband and wife are one body, they must also be united spiritually.

1 This is probably referring to the fact that serfs were often given surnames by their masters, and the names might reflect personality traits that were passed from father to son.—OC. The Upbringing of Children in a Broken Society
“Let’s Talk” about childrearing. Part 1
Archpriest Fyodor Borodin
There are many new challenges, including educational. We live in such a perplexing and challenging time. On How a Man Can Become the Head of an Orthodox Family
Dmitry Semenik
What kills the family and children is the fact that a man is afraid to even try to do what he is supposed to do! The Asceticism of Growing Up: On Family Life
Priest Pavel Serzhantov

The Asceticism of Growing Up: On Family Life
Priest Pavel Serzhantov
In our days, we observe an unhealthy process of growing up: First children are encouraged to progress more quickly into the category of teenagers (this traumatizes and incapacitates children), and then the brakes are put on, and teenagers aren’t allowed to become adults (they are prevented from developing).
Comments
×