In May, the Synod of Bishops of the schismatic “Orthodox Church of Ukraine” formed its own “Holy Dormition-Kiev Caves Lavra” religious organization, with “Metropolitan” Epiphany Dumenko as its abbot.

And on Thursday, the statutes of the OCU’s “Lavra” organization were legally registered with the state, the OCU reports.

The OCU hierarchs openly stated in May and last week that their creation of a “Lavra” is intended as a move against the presence of the Ukrainian Orthodox Church in the physical Kiev Caves Lavra, which has been state-owned since Soviet times but leased in part to the use of the canonical Church since 1988.

However, despite the many sensationalized articles that appeared in the media of various languages, this does not mean the state has seized the actual monastery and given it to the OCU, though the schismatics openly acknowledge that that is their ultimate goal.

For now, they are registered at a different address, across the street from the physical monastery, and have appealed to the Ukrainian Cabinet of Ministers for the use of one Lavra church.

Both Minister of Culture Oleksandr Tkachenko and OCU speaker “Archbishop” Evstraty Zorya made statements explaining that the legal registration of the OCU organization does not effect a change in the status of the monastery property (although the state has called the legality of the canonical Church’s presence in the Lavra into question—see below).

In connection with the appearance of information in the media about the registration of the legal entity “Kiev Caves Lavra OCU” and related speculation, it should be explained that this structure has nothing to do with the real Holy Dormition-Kiev Caves Lavra.

It is registered at a different address, and its appearance is not a consequence of the liquidation of the real Lavra of the Ukrainian Orthodox Church, which was returned to its historical premises back in 1988.

By the way, information about a parallel legal entity called “Kiev Caves Lavra” in the jurisdiction of the “UOC-KP” [“Patriarch” Philaret Denisekno’s “Kiev Patriarchate”—OC] existed in the corresponding register many years earlier. However, no “UOC-KP” monastery on the site of the Lavra has ever existed in reality.

We are seeing the same thing now—the OCU announced that it had registered a fake religious structure without any monks.

At the same time, the schismatic head Epiphany Dumenko, hailed the registration as “one of the cornerstones in the solid foundation of the Local Church,” and “a significant step towards the return of Ukrainian prayer to our sacred national place—the Caves Lavra.”

“Today, the Ukrainian Lavra has truly acquired subjectivity,” he said, “although so far it’s like a newborn baby.”

Elena Bogdan, the head of the State Service for Ethnopolitics and Freedom of Conscience, has commented that the OCU has no need of the Lavra. While hundreds of monks of the canonical Church live there now, the OCU has only 50 monks in all of Kiev, she said—a statement that caused Dumenko, whose church was founded by former President Petro Poroshenko, to exclaim that state officials have no business commenting on such things.

Asked on social media who will actually inhabit this monastery, OCU Speaker Zorya told one user: “When MP supporters write like this, I can understand it, but not from you… It’s like asking a newborn baby to take final exams. I’m surprised.”

To another he claimed that half of the monks currently living in the Lavra are ready to leave the UOC and join the OCU, and later there will be more.

While the canonical Ukrainian Orthodox Church hasn’t been banned and the Lavra hasn’t been seized from the Church, President Vladimir Zelensky issued an order last week that could lead there.

In particular, he ordered:

The Ukrainian state has also placed sanctions upon His Eminence Metropolitan Pavel of Vyshgorod and Chernobyl, the abbot of the canonical Kiev Caves Lavra, and several other hierarchs and one protodeacon. 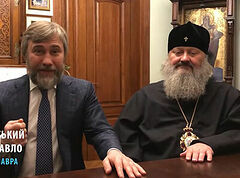 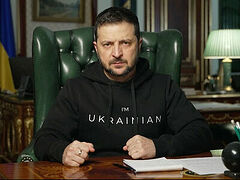 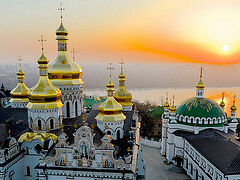 Kiev Caves abbot comments on situation regarding investigation into supposed “prayer for Russia”
“I’m sure Fr. Zachary himself wasn’t singing these songs,” Met. Pavel said. “We don’t sing secular songs in church, only the glorification of saints is sung in church… In church, we must pray for one thing—for peace, for a speedy end to the war.”
Comments

James P12/6/2022 4:44 pm
What a pathetic statement: "It’s like asking a newborn baby to take final exams." Could any Orthodox person, let alone a bishop, talk like that? He is self-describing his "church" as something hatched, and not the true Church found by Christ, with apostolic succession. And what on earth makes him think that "half the brotherhood is ready to join the OCU"? At the barrel of a gun some might give in. But even that is doubtful.

Brisingrius12/5/2022 4:56 pm
They are robbers,thieves and brigands! How dare they stolen that name? These Schismatics are trying to transform the Lavra into another Hagia Sophia? How dare they?
×