“We will never allow anyone to build an empire inside the Ukrainian soul,” he said.

However, as state searches of monasteries, churches, and diocesan administrations intensify (accompanied by allegations of planted “pro-Russian” evidence), with the Ukrainian Security Service opening cases against hierarchs and clergy (the Lavra hieromonk who was anointing the faithful while a group of women sang about the spiritual revival of Holy Rus’ and His Eminence Metropolitan Joasaph of Kirovograd are the latest to come under official suspicion), and as local administrations continue to declare bans on the canonical Ukrainian Orthodox Church (there were reports of at least three more bans yesterday), many members of the Church are concerned about the state’s vision for spiritual independence.

Commenting on the meeting of the National Security and Defense Council held yesterday, the President said: “We have to create conditions where no actors dependent on the aggressor state will have an opportunity to manipulate Ukrainians and weaken Ukraine from within.”

“With these and other decisions, we guarantee Ukraine's spiritual independence,” Zelensky affirmed.

The head of the State Service for Ethnopolitics, Elena Bogdan, has warned several times that a ban on the Ukrainian Orthodox Church is ill-advised and would certainly cause destabilization in society.

She has also confirmed that the statutes of the UOC adopted at the Council in May show no connection to the Russian Orthodox Church. She has also commented that the schismatic “Orthodox Church of Ukraine” has no need of the Kiev Caves Lavra, as they have only 50 monks in all of Kiev—a statement that greatly angered “Metropolitan” Epiphany Dumenko of the OCU.

Bogdan most recently addressed these issues in an interview last week. 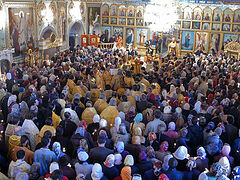 On Our Prospects
Metropolitan Luke (Kovalenko) 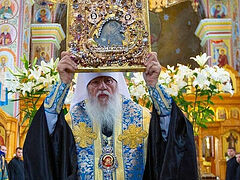 Odessa Province rejects motion to ban Ukrainian Orthodox Church
Yesterday, the Odessa Provincial Council held a vote on the issue of banning the UOC, initiated by Anastasia Bolshedvorova of the European Solidarity Party. 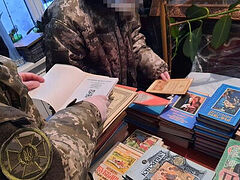 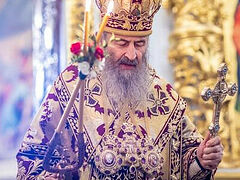 Ukrainian Church statutes no longer have any connection to Russian Church, state official confirms
“In an official letter, Metropolitan Onuphry clearly indicated that the UOC is no longer governed by the decision of the Bishops’ Council of the ROC, and officially announced its disassociation from the Moscow Patriarchate,” Elena Bogdan said. 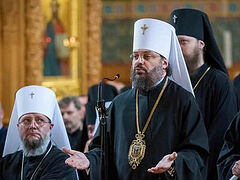 Metropolitan of Lvov: “We are completely outside the Russian Orthodox Church”
Based on the changes to the Statutes, “it’s possible to say that these are really two separate Local Churches,” Met. Philaret affirms. But at the same time, “Autocephaly is a process—the process of recognizing a Local or independent Church.”
Comments

Cornelius12/7/2022 4:01 pm
It is logical for the Zelensky regime to persecute the Russian Orthodox Church in Ukraine. For the same reason the church was persecuted by the communists. It was not the Nazi’s who did this. The enemies of Christ are doing this.

Mikhail12/2/2022 8:14 pm
Poroshenko and US state department planted the evil seed. Bartholomew watered it. Zelensky will multiply it.

IG12/2/2022 6:48 pm
Ukrainians should stay strong and keep their orthodox faith, not go with the schismatics, otherwise they are doomed.

Antiochene Son12/2/2022 4:53 pm
It's interesting how every single underhanded tactic the West accuses Russia of, Ukraine actually does. From banning political parties to persecuting religion.

Alexander 12/2/2022 3:57 pm
This is against european freedom of Religion. They are fascists and really nazis. God shall punish these godless people.
×