A Harmful and Pernicious Force: On Fighting the Imagination

On the Spiritual Work of the Human Mind, Part 2 The imagination is an irrational force. It acts mechanically, as the Holy Fathers say, pictorially, artificially according to the laws of the combination of images. This activity corresponds only to the kind of secular life that is itself artificial and has no freedom. The imagination distracts people from God, directing their attention to everything vain and sinful, disturbing their peaceful spirit and good mood. We suffer from the imagination not only in reality, but also in dreams. Thus, preserving everything sensory and carnal in our minds and hearts, the imagination hinders the ascent to God in the spiritual life, scatters our thoughts, and defiles them with impure thoughts and memories of past falls and pleasures. This irritates, it takes away our peace and deprives us of grace. The imagination is a harmful and pernicious force for the spiritual life.

However, if in secular life the imagination brings not only harm, but also good, when it directs a man to the idea of the blessedness of the future life, when it helps him be transported to the Heavenly world, then why is the imagination only harmful in the spiritual life?

Because the Omnipresent, Omnipotent, and All-righteous God is above all and beyond all imagination. Therefore, the imagination can’t unite man with God. This was proven by the fall of the angel who dreamed of being equal with God and turned into the devil. He filled his mind with imaginary images and became the inventor of this force that he uses to destroy men. The Holy Fathers say that through the imagination, demons enter into human souls and turn them into habitations for evil and God-defying thoughts.

The mind of the first man, writes St. Maximos, was pure and imageless, and sensory objects didn’t affect him, but as the slayer of mankind—the devil—himself fell because of his dreams of equality with God, so he led Adam to the point of dreaming of the same. After man fell into such a dreamy state, all sorts of passions were born in him and he was mired in lies. According to the expression of the Holy Fathers, man “filled moral teaching with various seductions, physics with many false teachings, and theology with obscene and preposterous dogmas and fables. The highest power of the soul has to work in man—the mind—which must first of all be cleansed of passion and imaginary images. And what’s especially harmful is that people have embraced this lie and hold it tightly, as if it were truth expressing reality.

Beloved! Is it not clear that not only spiritual people who desire to be free from passions, delusions, and the machinations of the enemy must courageously fight with the imagination, but all people—the secular, leaders of science, educators, and statesmen must also conduct internal warfare with the memory and imagination of everything sensory in order to strip minds of impurity and perceive the truth, through the illumination of the Divine light! The light of Christ enlightens everyone! As the Holy Fathers teach: “Labor to preserve your mind colorless, imageless, formless, and pure, as God created it.”

There’s only one way this is achieved: by enclosing the mind in the heart. We have to return the mind, which soars through the outside world, to its former and natural home in order to fulfill its purpose, pray together with the heart, give heed to the actions of the heart, contemplate God, and take its rest in Him, and thereby be delivered from the passions, sins, and lies. This requires enclosing the mind in a tight place, inside a man, so it can’t be dispersed and distracted. When a snake is about to shed its skin, it goes into a tight place and slithers through it with great effort. So the mind, striving for the path of salvation, makes its way through the heart, and with the help of unceasing prayer, it sheds the clothing of the imagination and becomes pure, bright, and fit for unity with God.

Just as the rays of the sun are more blinding and more burning when gathered into one point, so the mind concentrated in the heart becomes luminous and burns the images of the imagination. In this way, many unlearned and illiterate people have been vouchsafed the gifts of the Holy Spirit, for Christ Himself said: I thank thee, O Father, Lord of Heaven and earth, that Thou hast hid these things from the wise and prudent, and hast revealed them unto babes (Lk. 10:21).

That our mind must be enclosed in the heart is clear because the passions and thoughts lie, according to Christ, in the heart, whence they come and fight us. St. Gregory the Theologian and many other Holy Fathers teach that our enemies take refuge near the heart, for the Lord Himself said that after Baptism the unclean spirit comes out of a man and later returns to him when he finds his heart free of grace.

Thus, unceasing prayer, thinking about God, about the Kingdom of Heaven, and the abiding of the human mind in the heart contribute to the purification of the heart and soul from the passions, to its enlightenment with the true light, to acquiring positive knowledge; and it helps with work, obtaining a means of living, or at least fulfilling our numerous duties. If the mind soars throughout the external world, if it is carried away by imaginary images and feelings, then it’s useless to others, harmful to itself, and barren in life.

Let those who have ears, hear; let them understand with their minds and hearts; let them know the great truth revealed by the Spirit of God to all who want to consciously follow the path indicated by the Lord. 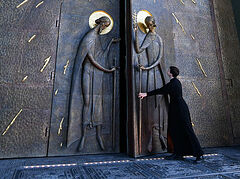 Whose Side Are We On?
Fr. James Guirguis

Whose Side Are We On?
Fr. James Guirguis
We simply open a door for the Lord and He enters and as we have seen in today’s story, there is no place where Christ is present that isn’t forever altered and changed and sanctified. Wherever the light is present, the darkness is vanquished. 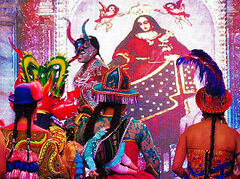 If We Believe in Christ, We Believe in His Words
Instructions for the Spiritual Life, Part 4
St. Makary (Nevsky), Metropolitan of Moscow and Kolomna
And note, brethren, the temptation that our cities and villages are exposed to, where they arrange traveling shows and circuses for empty and seductive spectacles. 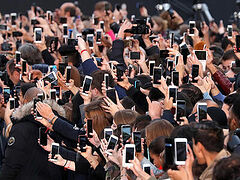 Not Becoming A Modern Pharisee
Archpriest Geoffry Korz
Our Pharisees are the media—often funded by the government—and the social media.
Comments