“Cuba is a country with a rich and dramatic history”

Priest Savva Gagloev was born in South Ossetia, but today by the will of God he is the rector of the Church of the Kazan Icon of the Mother of God in Havana and the representative of the Russian Orthodox Church in Cuba. In this long interview he spoke about the depth of Cuban culture, civilizational differences, Orthodoxy on “the Island of Freedom”, the mystery of the conversion of locals, interaction with the Russian diplomatic mission, his priestly responsibility, and the country’s beauty and shrines. —Father Savva, how did you convert to the faith?

—I was born in 1973 to a family of teachers in a picturesque corner of the Soviet Union—in South Ossetia, remarkable for its nature and people. My father was a school principal and a mathematics and physics teacher, and my mother was a biology and chemistry teacher. My father was a member of the Communist Party. The family in which I grew up was secular, but thanks to the specifics of the region, the customs and traditions of our ancestors were preserved. Religious feasts were celebrated. Not a single festive meal was complete without a prayer to God, the Mother of God and the Heavenly powers. It was and remains an organic part of the local culture, so the turning point for me can be called a deeper understanding of the faith rather than a conversion. I was in high school when my existential questions appeared. These were questions about the purpose of life, eternity, the immortality of the soul, Christ, and so on.

—Why did you decide to become a priest?

—One should become a priest if he has a calling. And I can firmly say that I felt such a calling. It helped me overcome all obstacles, and despite the circumstances (at that time South Ossetia was practically in a state of siege1), enter the Moscow Theological Academy in Sergiyev Posad. In school I had a passion for both natural science and humanitarian subjects, so it was hard to make a choice. It seemed that spiritual education was integral because it embraced all spheres of life and knowledge. In a sense, that is the way it is. —But here the main question arises: How did you end up in Cuba?

—This is a story about God’s Providence. In September 2011, on the feast of the Translation of the Relics of the Holy Right-Believing Prince Alexander Nevsky, I was ordained priest by His Holiness Patriarch Kirill at the Moscow St. Daniel Monastery. A few months later I was sent on a mission to the North Caucasus to help the ruling bishop in the newly established Diocese of Vladikavkaz and Makhachkala. In 2017, after the mission was over, I was asked to choose my next place of ministry—either the USA or Cuba. And I chose “the Island of Freedom”.

Before the voyage across the ocean I visited Archimandrite Vlasiy (Peregontsev; 1934–2021) of blessed memory, the elder at the St. Paphnuty of Borovsk Monastery in the Kaluga region, and received his blessing. His blessing and prayers still support me in my ministry.

—What were your first impressions? Did you have a culture shock? Tell us what (both then and today) caught your eye in terms of lifestyle, mentality, rules, social attitudes and life in Cuba in general?

—There was no shock, but it really took time to get used to the new reality, in which I providentially found myself. Sometimes I could not believe that I already lived in Cuba. I needed to make some effort to come to believe in obvious things. Cuba belongs to a different civilization, a country with a rich and dramatic history. You can talk about our differences for hours, but this is a subject for another conversation. It seems the main differences always lie in the subtleties, in the deep layers of culture, and their discovery and comprehension require considerable skill and knowledge. There are many differences ton he surface, but we can hardly say that this is what makes one or another country unique. For example, it is impossible to imagine Cuba without vintage cars (they are part of the image of the country), but at the same time it is obvious that, scientifically speaking, they don’t comprise Cuba’s idiosyncrasy.

—Do you like it here? Do you have the desire to return to your homeland?

—Learning new things is always interesting. My whole family—my wife, two children and I—are grateful to God for this opportunity and the experience of life in Cuba. There has been no painful nostalgia, thank God, but the motherland never leaves our hearts. And life is not always built on your desires; there are also duties, obedience, and other circumstances.

—Tell us about life in Cuba—its people, atmosphere, advantages and disadvantages. What does the country look like through the eyes of a Russian?

—From the point of view of a Russian, it is summer in Cuba all year round and you can safely swim in the local seas in winter. The abundance of sunlight creates a positive atmosphere of life on the Island. The Cubans are open and talented. I would say that Cuba is the musical capital of Central America. There is an abundance of musicians, dancers and artists here. Locals have an innate sense of rhythm, and most of them are dancers from birth. Certain areas of medicine and pharmacology are at a high level. However, the economic isolation that has lasted half a century has hindered the country’s development, and not everyone can endure the living conditions here. There is a considerable outflow of population. People emigrate abroad in search of better lives for themselves and their children. Economic sanctions cause food and commodity shortages. Lines for groceries and other goods are a daily reality in Cuba. People are so accustomed to it that when they’re abroad they feel nostalgia for queues. While spending hours in queues, people talk and exchange information. Mere waiting lines have developed into a socio-cultural phenomenon. But, in spite of everything, Cubans do not lose heart and keep their faith in their country and its future. There is a saying: “Where there is at least one Cuban, there is victory.”

—How long has Orthodoxy existed on “the Island of Freedom”?

—The presence of the Russian Orthodox Church in Cuba dates back to the ordination of the first Orthodox Cuban to the priesthood in 1971. He was a representative of the Havana intelligentsia, Julio Dominguez Garcia. The ordination at the request of the Orthodox community was performed by Archbishop Nikodim (Rusnakov) of Kharkov and Bogodukhov, Exarch of the Patriarch of Moscow and All Russia in Central and South America. At the same time, the parish of the Church of Sts. Constantine and Helen Equal-to-the-Apostles was established. The community mainly consisted of Greeks and Russians. Prior to that historic event, clergy of the Patriarchate of Constantinople used to come to Cuba, but none of the Churches had had an official presence there. The Church of Sts. Constantine and Helen was soon officially closed due to an “emergency state”. The community itself lived longer, but without a church and liturgical life there can be no full-fledged parish.

—How many parishes are there today in the diocese to which Cuba belongs? How many Orthodox are there in Cuba these days, and of which jurisdictions?

—Our parish is not part of any diocese. In addition to us, the Patriarchate of Constantinople is present in Cuba. They have three churches in different cities and a number of small Eucharistic communities throughout the Island. The Havana church of the Ecumenical Patriarchate is adjacent to our Church of the Kazan Icon. There are few Orthodox in Cuba. Moreover, due to the high level of migration there is a decrease in the number of religious communities, including Orthodox ones.

—Now let’s move on to your parish. First let’s talk about the history of its foundation. How was the idea to build a church conceived here, and who were the initiators of this good initiative?

—Favorable conditions for the establishment of a new parish and the construction of a church appeared in the 2000s. Then, at the request of some of our compatriots in Cuba, headed by Tamara Lvovna Blackhood Hernandez, Hieromonk Markell (Fanyshev) was sent here from Moscow in coordination with the country’s leadership. Soon, during a meeting between the leader of the Cuban Revolution and Metropolitan Kirill (the current Patriarch of Moscow and All Russia), an agreement was reached on the construction of a Russian church in Havana. The construction began in 2006, and on October 19, 2008, it was consecrated. The new church was dedicated to the Kazan Icon. The construction was carried out using Cuban funds. The domes, an iconostasis, the interior fittings and liturgical utensils were delivered from Russia.

After Hieromonk Markell (Fanyshev), the successive rectors of the parish were Hieromonk Merkury (Gorbov), Archpriests Vladimir Klyuyev, Vyacheslav Bachin and Dimitry Orekhov. Fr. Dimitry was my predecessor. By the time I arrived in Cuba in 2017, Archpriest Julio Dominguez was still alive. Unfortunately, he died soon after that. Although we had never met in his lifetime, I was honored to serve his funeral and lay him to rest. Such is the continuity in the history of Russian Orthodoxy in Cuba.

1 He is referring what’s generally called the Russo-Georgian war (2008), which was fought over South Ossetia.—OC. 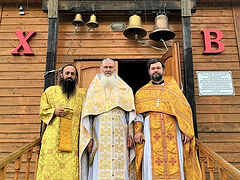 “You’ve Got Work to Do in America,” Part 1
Priest Sergei Kosov

“You’ve Got Work to Do in America,” Part 1
Priest Sergei Kosov
I wasn’t planning to go to seminary or become a priest. As my parents’ only son, there could be no thoughts about going to America. 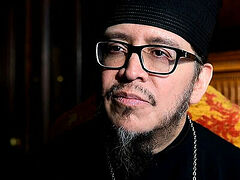 Archimandrite Nektary (Haji-Petropoulos): “We Serve the People of God and the Church, and All Our Earnings Go to This” 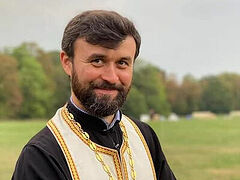 Before the Cross, All are Equal, Both Senators and Migrants
Fr. John Dmitrov

Before the Cross, All are Equal, Both Senators and Migrants
Part 1. Building a Community is an Amazing Experience
Priest John Dimitrov
The Church is the house of God, not of man. In this house, everybody is a guest, and there is only one Host.
Comments
×