Fr. Sergei Kosov is a Russian priest and the father of several children, who has worked in America as a mover and a floorer. He was almost inconsolable when his long-awaited daughter was born with Down syndrome. But the Metropolitan told him: “It’s a blessing for you.” As a consolation, the Lord sent Batiushka, his family, and his parish land for a church. Twenty-nine acres—in America! This includes five acres of cleared land, and they’ve already begun construction. The rest is forest—and a future park. It’s simply a miracle of our times. We drove through the autumn colors onto a spacious plot in the city of Chesapeake, Virginia, where the parish of St. Joseph of Optina is building its own church. There are farms on both sides. On the left is a turkey farm; on the right, horses. And if the horses were quiet and barely noticeable until the parish children discovered them, then the turkeys mustered courage by the middle of the Liturgy and wandered into the parish’s plot of land. They froze when they heard the singing, but the children moved the birds onto the territory without any noise. And in the gazebo erected under the open sky and next to the dense forest, the rector of the parish of St. Joseph of Optina, the Muscovite priest Fr. Sergei Kosov, continued to serve the Liturgy—the first on their own territory in the nearly thirty years of the parish’s existence.

Most of the parishioners had already gathered by the beginning of the service. Those with children came later. The faithful are from former CIS countries: Russians, Ukrainians, Belarusians, Moldovans, Kazakhs, Uzbeks, and also Bulgarians, Romanians, American converts, and even Orthodox Christians from Morocco. Childhood in the Kaluga Province

—I spent my childhood in Moscow, but I spent every summer with my grandmother and grandfather in the Kaluga Province, helping them with their village labors. I heard my first prayers from my grandmother Vera. I would pray with her myself and go on pilgrimage—to St. Paphnuty of Borovsk Monastery, to Shamordino, and to the Optina Hermitage, which was little-developed in those years. And upon returning to Moscow, I served in the church in Peredelkino, where Archimandrite Iliy (Nozdrin) had just arrived in those years. He’s the one who blessed me to go to seminary. The Elder repeated the blessing of my spiritual father word-for-word. Hieroschemamonk Theodosy (Elfimov) My conscious church attendance began in 2009. It was then that, thanks to my former classmate and future wife, I found a spiritual father—Hieroschemamonk Theodosy (Elfimov) of the St. Michael-Mt. Athos Hermitage in the Republic of Adygea. I started helping with the Church services and carrying out obediences in the Skete of the Nativity of St. John the Baptist in the village of Novoprokhladnoe (Sakhrai).

I wasn’t planning to go to seminary or become a priest. As my parents’ only son, there could be no thoughts about going to America.

Once, my spiritual father and I went to the skete after the funeral of a newly reposed babushka. And he said to me: “Congratulations on the beginning of your service to God. You should to go seminary.” I thought about it. Then I returned to Peredelkino, I went into the altar, and there was Fr. Iliy. He turned to me and repeated the words of my spiritual father word-for-word, that I should go to seminary. And that was the first time he’d ever seen me! At St. John’s Skete in Adygea I listened to both of them. Fr. Theodosy married Lali—my future matushka—and I. Later, when she was pregnant, she flew to America to visit a relative, and I submitted my application to the Moscow Theological Academy.

She called me one Sunday and said: “There’s an Orthodox seminary in America.” And she started telling me about it. It turns out she went to church on Sunday and started talking with the priest, telling him her husband was planning to go to seminary. And Batiushka told them they had a seminary too. She’s very lively; she rented a car and went to Jordanville. When she arrived, she met many people there. And when she returned home to Russia, I remember, we were sitting with Fr. Iliy in the trapeza, talking about this idea. Fr. Iliy looked at my wife and said: “You need to give birth there.” I even condemned him a little then: We live in Moscow—is there really nowhere to give birth here? But we obeyed and went overseas.

The blessing of Blessed Xenia Nina Mikhailovna Solovieva —So in 2012, with the blessing of two elders, I went to Jordanville and started seminary. But the question was where would my wife and future child and I live?

I went to see the rector of the seminary, Fr. Luke (now the Bishop of Syracuse) and introduced myself, saying I was a new seminarian. He told me: “Go home, there’s nowhere for you to live here. All our married student housing is occupied.” Then he thought and said: “Go to the lower church, read the Akathist to Blessed Xenia of St. Petersburg.” I took his blessing and went to the lower church. The next day, one of the monks, Fr. Cyprian, came to see me and said: “Babushka Nina Mikhailovna Soloviev is living on the hill there. She’s elderly, the monastery helps her. If you want, we can assign you to live with her. You’ll live for free and help an old babushka.” Metropolitan Hilarion (Kapral) at Nina’s home in Jordanville Thus, within a day we had found a home. Nina Mikhailovna is a well-known parishioner in the Church Abroad (she reposed in August of this year). She was known by more than one generation of seminarians, which includes our hierarchs. She regularly had feast day meals for seminarians at her home. She gathered everyone under her wing. All her children and grandchildren were brought up in the faith. Her son Michael is a protodeacon at the Church of the Nativity of the Theotokos in Albany, near Jordanville. It was at her house that I first met the ever-memorable Metropolitan Hilarion.

Time passed. When it came time for Matushka to give birth to our first child (Naum), whom Fr. Iliy had said needed to be born in America, we understood what he meant. During birth, the baby’s heart almost stopped. The doctors noticed and performed a C-section just in time.

Once, when we went to see Fr. Theodosy he asked: “How are things there with the babushka?” “Glory to God,” we said. “All’s well.”

“Lord, such a cross right away?”

—Fr. Sergei, let me interrupt you here. What do you think: is it the right thing for a family to have one spiritual father?

—For our family—yes. Batiushka knows us inside and out. He’s been feeding us spiritually for many years now.

—What kind of person is Fr. Theodosy?

—Fr. Theodosy is a Siberian; he labored there all his life. Then he went to Krasnodar where he was the director of a school. Already at that time, as if jokingly, he began to foretell something to the students in class. And after a while, twenty-thirty years later, what he foretold came true. When his children were grown, his wife went to a monastery in the Krasnodar region, and he was tonsured too. Then Fr. Theodosy started building the St. John the Forerunner Skete in the mountains near Maykop.

My matushka went to visit Fr. Theodosy before there was a skete, and she and the girls went to help. They would sometimes spend the night in a tent, with coyotes running around, and sometimes with local babushkas. Then the babushkas died. And the people started coming to Fr. Theodosy for spiritual guidance more often. Then Batiushka started building a guest house for pilgrims. The people helped him physically, and Batiushka supported them with prayer.

Fr. Theodosy is a visual teacher for me. His life is a textbook, a visual aid about how to live now. And when doubts arise, I just think about what Fr. Theodosy would do. That’s the kind of relationship I’ve formed with my spiritual father over all these years.

We had a group of young people from Moscow, Krasnodar, and other cities. Every year we’d go see Batiushka at the skete for a few weeks. The young men would work on construction, and the girls would sew and help with the housework. We worked, talked, and prayed together.

During this time, Fr. Theodosy married many from our group. We became godparents of the children born in our families. And we still meet up and talk. There are lawyers, professional athletes, entrepreneurs, and iconographers. Everyone works, and everyone goes to church. I’m the only priest. But then, I became a priest out of obedience.

Batiushka is an example of life for all of us. His love is sacrificial, like that of the Savior. When they built the guest house, he fell and broke his leg. They took him to the hospital and they put pins in. I stayed to be in charge of the skete. I went to see him the next day, but he wasn’t in the hospital. I asked: “How’s that possible? He had surgery just yesterday. Where is he?” “The women picked him up,” they told me.

What women? I called him, and Batiushka said: “My child, everything’s fine. How can I leave my parishioners” They’re sick—I have to go give them Communion.” I said: “But you’re on crutches.”

They brought him back to the hospital. His leg had turned black. The doctor sternly said that if there’s any complication, he’d have to cut it off. Fr. Theodosy told the doctor: “It’s all up to the will of God!” I went to see him the next day, and again he wasn’t there. The doctor said: “You take him; we won’t make him come back again.”

In the end, Batiushka communed everyone, and his leg was whole and healed. There are many such stories.

One day, some young parents brought their infant whom the doctors in the hospital had turned away and sent home to die. They said medicine was powerless in his case. The town of Mineralnie Vody (Mineral Waters) wasn’t far away, and Batiushka said: “Why’d you come see me, a sinner? Go to St. Theodosy of the Caucasus and pray there.”

I called him and he said: “Tell me about the construction. We have to build quickly. I’ll come help and support you.” But they didn’t let him out… 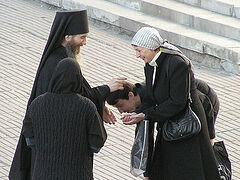 On the Meaning and Power of a Priest’s Blessing
Instructions for the Spiritual Life, Part 1

On the Meaning and Power of a Priest’s Blessing
Instructions for the Spiritual Life, Part 1
St. Makary (Nevsky), Metropolitan of Moscow and Kolomna
It’s not an empty sound, not a simple gust of the wind; no—it contains the power of God. 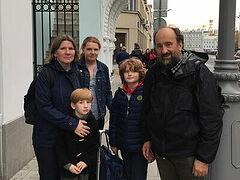 “I am incurably heartsick for Russia”
A Talk with Jordanville’s Deacon Andrei Psarev. Part 1

“I am incurably heartsick for Russia”
A Talk with Jordanville’s Deacon Andrei Psarev. Part 1
Deacon Andrei Psarev
Deacon Andrei Psarev is a senior lecturer at the legendary Holy Trinity Seminary in Jordanville and a researcher into the history of the Russian Church Outside Russia.. We have talked with Fr. Andrei on the outstanding alumni of the Seminary, the difficulties of a seminarian’s life, new historical discoveries, and the distinctive Russian culture in the diaspora. COVID-19, the reasons behind The Black Lives Matter phenomenon, and the lessons of Church life. 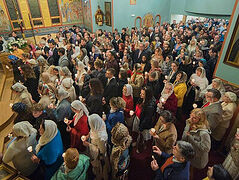 One Family in Christ. Scenes from Boston
Elena Zoubareva
I recalled everybody—both the living and the departed, those from Boston, Moscow, St. Petersburg and Samara… All of us--both on the earth and in eternity, those who are visible and invisible—we are together in the same Church and make one family in Christ.
Comments
×