When the soul asks for healing: about hospital ministry experience

The goal of this reporting trip was to visit emergency care hospital No3 in Cherkassy, Ukraine, where the church dedicated to the Physician and Evangelist Luke has existed for more than twenty years Metropolitan Theodosius with the students of the Cherkassy Medical Academy

On my way there, I automatically remembered the events of life, when the author of these lines was waiting for joint replacement surgery. I remember the joy I experienced upon learning that hospital number twenty-one in Kiev, where I was supposed to have my surgery, had a church in honor of St. Luke of Crimea, whose patron saint was the evangelist Luke. I happened to be in Crimea in 1994 on the day of glorification of that one-of-a-kind physician, the wonderworker and confessor of faith St. Luke Voino-Yasenetsky. I also read and wrote about him, and I thought at the time that the saint must have decided to take pity on me, taking under his healing omophorion. It was also wondrous to find out that the surgery room was adjacent to the hospital's house church and that my surgeon also revered the memory of St. Luke Voino-Yasenetsky. The surgery was successful, and for almost twenty years, I was able to move freely and even serve at the altar of God.

Having had that personal healing experience, not once did I become convinced how important it was for a sick person, to receive in addition to the medical help spiritual assistance as proof that the Lord heals both the body and the soul, as, according to David the Psalmist, He healeth the broken in heart and bindeth up their wounds (Psalm 146:3).

Returning to traditions once lost

Healthcare in Russia was developed under the auspices of the monasteries. The monasteries and churches had their own clinics and almshouses

Gradually, even if not everywhere, the tradition, long forgotten since the pre-revolutionary times, of having a sisterhood and a hospital church at every clinic found a new lease on life. The term “medical sister”1 was the only “rudiment of the bourgeois past” that remained in the Soviet times, whereas the red crosses in our hospitals, and also painted on ambulances, were always a reminder of that long-gone era.

Basically, healthcare itself was developed in Russia under the auspices of the monasteries. As early as the twelfth century, the holy miracle-working physician Agapitus of the Caves, Sts. Alipius and Hypatius the Healers were healing the sick in the Kiev Caves monastery. Clinics and almshouses existed at monasteries and churches. That’s how it’s been throughout the ages. Suffice it to recall the well-known Pokrovsky (Protection) Monastery in Kiev, founded at the turn of the nineteenth and twentieth centuries through the means and labors of Nun Anastasia—Grand Duchess Alexandra Petrovna Romanova—already glorified among the saints.

Shortly before the revolution of 1917, Nun Anastasia founded a comprehensive monastery clinic, equipped with top-notch medical equipment of the time, which had highly skilled physicians and offered free medical care to lower-class patients and soldiers of the First World War. She would also personally assist the surgeons during surgeries on the daily basis.

Actually, during the Great Patriotic War of 1941–1945, a military hospital was located on the territory of the Pokrovsky Monastery, and the nuns of the monastery took care of the wounded. In April 2003, the Ukrainian Orthodox Church and the Ukrainian Ministry of Health signed a cooperation agreement. The UOC currently has two hundred and sixty four hospital-affiliated parish churches. Two hundred and forty clergymen, fifty-five of them physicians, carry out pastoral care in the hospital churches. The greatest number of hospital churches is in the diocese of Kiev, numbering thirty-five, with twenty-six in Kharkov and twenty-two in Dnepropetrovsk dioceses. There are thirty-one sisterhoods and four medical fraternities.

As he was giving me a blessing for my trip, Metropolitan Theodosius (Snigirev) of Cherkassy and Kanev explained that over several decades, the hospital parish church at the 3rd City Ambulance Hospital had accumulated valuable experience in cooperating with the medical personnel. A hospital church is not an independently operating spiritual institution, noted the Vladyka, but rather an integral part of the hospital that offers care to people as God's unique creation. Apart from caring for the sick, much of effort was given to the religious education of the medical professionals there, as well.

A rather large space in the house church on the first floor of the hospital was filled with worshipers, so that they spilled into the hallway. Vladyka Theodosius presided at the Divine Liturgy. Concelebrating him were Archimandrite Victor (Solonko), the hospital chaplain, and the local clergy.

Following the service, we were able to speak for a little while with Father Victor.

“Our clinic admits emergency care patients who need urgent treatment, many of them in grave condition,” he said. “So, the doctors here fight for people's lives every day. That's why our church received the name of the Holy Apostle and Evangelist Luke, who, as you know, was a physician. Both the patients and the doctors appeal to him for help. Archimandrite Victor (Solonko) speaks to Schemanun Vera, who being treated in the hospital

Sick people are in particular need of spiritual help. Speaking to a priest and participation in the sacraments of the Church gives them strength or even heals at times. We have many such examples. It isn’t common to talk about them, even though such cases also support our faith.

A sick person intuitively feels that his illness somehow has to do with his life, the mistakes he has made, and the sins he has committed. So, first of all, the soul seeks healing.

For example, there was the following. A woman was admitted to the hospital, the tests confirmed that her hemoglobin level was too low, and the doctors feared for her life. She had confession, received Holy Communion, and received help from heaven. The doctor who treated her couldn’t believe what he saw, thinking at first that her new test results were false, so he recommended she undergo testing one more time. But the woman was found to be perfectly healthy.

Another incident that stands out happened on Pentecost last year, when our parishioner who had suffered from asthma for many years—and it typically lasts a lifetime—experienced significant relief during the kneeling prayers read on that day. Just before the service she was panting, barely able to stand, only later to realize that the Lord had healed her. It is important that not only your faith, but also love for God and the desire to amend your sinful life, are for real. Because it is our sins that cause sickness, misery and all sorts of misfortunes. Whenever the soul suffers, our body suffers, too. The church is a spiritual ship where we often come together with the medical professionals to glorify God. All of us on this spiritual ship seek to find salvation. In general, the cooperation between the Church and healthcare in our diocese is not accidental: our Metropolitan Theodosius also has a medical degree.”

“Cherkassy is a city that St. Luke of Crimea, Professor Voino-Yasenetsky, the famous surgeon and miracle-working saint, visited many times. His parents and sister are buried here, not far from the site where our new cathedral church stands today. The holy hierarch worked for some time not far from town, in the village of Denghi, as a “zemsky”2 doctor. Undoubtedly, owing to his prayers our Cherkassy Diocese developed a healthy, constructive and mutually beneficial cooperation between the Church and local healthcare facilities. We have two house churches attached to hospitals. I have an opportunity to speak to future medical professionals. Whenever I get to meet them, I rejoice since I witness their sincere interest not only in medicine, but also spiritual matters. The Cherkassy medical college’s assembly hall is named after St. Luke of Crimea, whereas on St. Luke's remembrance day, its students willingly come to our Soborny Park and the monument to St. Luke for the ceremony of blessing of their white coats. Blessing of white coats of the medical students

In short, here, in Cherkassy, we truly sense the patronage of the holy hierarch Luke of Crimea, and our clergy all over the diocese try their best to lighten the noble and holy work of our doctors.”

As we were leaving the hospital, we saw an ambulance pulling up to the emergency room entrance; the paramedics were bringing in another patient, lying on a stretcher and hooked up to an I-V drip that the doctor was holding in his hands. A new battle for human life was underway. God willing, this one will be won...

2 After abolition of serfdom in Russia, medical care in rural areas was provided by the locally elected councils called “zemstva,” thus the name of medical specialists working there. 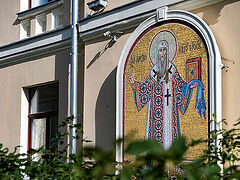 Russian Church hospital to open medical office in Melitopol in conflict zone
Volunteer doctors will provide free medical care and medicine to those affected by the war starting on Sunday at the Church of St. George the Great Martyr in Melitopol in the southern Zaporozhye Province. 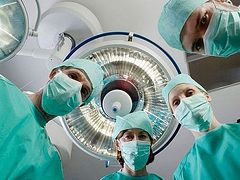 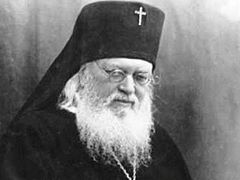 "I Loved Martyrdom..."
St. Luke the Doctor and Archbishop of Crimea (1877-1961)
This incredible figure and his divine greatness is the cause of astonishment, admiration, and divine consolation.
Comments
×