The persecution against the Ukrainian Orthodox Church is reaching a culmination point. On December 28, timed as if the government wanted to “turn over a new leaf” before the New Year, the Constitutional Court of Ukraine ruled that the bill calling for the forced renaming of religious organizations associated with organizations in Russia is constitutional. This of course is aimed solely at the Ukrainian Orthodox Church, which the Ukrainian Parliament, with President Zelensky’s backing, is set to ban completely.

Although competing, nationalistic jurisdictions have been pushing this for thirty years, only now have the courts changed the notion of what is constitutional. And although the Ukrainian Orthodox Church has been self-governing as long, and even recently amended its charter to completely disassociate itself from the Moscow Patriarchate, it is still being viewed by the state as “associated with Russia”. The reason for these machinations was made quite obvious when on December 27, the abbot of the Kiev Caves Lavra, the heart of Ukrainian and Russian Orthodoxy, was informed that his lease was up and beginning January 1, 2023, the brotherhood would not be allowed to hold services in the main churches of the Lavra. And we can only wait for the next shoe to drop—when the brothers are told (may God forbid it) that they must vacate their home.

These legislative actions are intended to make the seizure of churches belonging to the Ukrainian Orthodox Church, which have already been going on unpunished for decades, something entirely legal and “constitutional”. In other words, outright robbery of other people’s labors and property has been legalized. Metropolitan Luke (Kovalenko) of Zaphorozhie commented on this in a recent telegram post:

“This is not a fable, but something that really happened to me. Once, my godson asked me to buy him a toy horse. I went to the store and asked the saleswoman if they have a horse. ‘We do’, I heard the affirmative answer. A minute later she brought me a cute stuffed donkey—a tail with bushy fur on the end, a donkey face and ears—all of it typically donkey-like. ‘But this is a donkey’, I protested. The woman showed me the tag on the toy, where it was in fact written, ‘horse’. ‘Well, forgive me,’ I went on, “but can’t you see for yourself that this is a donkey?’ She replied in a threatening tone, “Mister!!! (Incidentally, I was wearing a cassock). ‘Don’t you know how to read? It’s written here clearly: HORSE.’

“I remembered this story that took place a long time ago in connection with the decision by the Constitutional Court on the forced renaming of our Church. The very fact of this renaming is absurd in and of itself. As it turns out—whether the faithful want it or not, they will be called what others want to call them, and not what they consider themselves. Moreover, people have already made their choice when they stepped across the threshold of the church. (Just as the stuffed donkey had no chance whatsoever of becoming what it really was.)

We were registered a long time ago as the Ukrainian Orthodox Church. But from the beginning someone decided to stick a label on us with the name “Moscow Patriarchate”. And now this “saleswoman” or salesman”, only this time in the person of a judge, decides to rename us with whatever name comes into his head (in fact hanging a label for a lynch trial). But the secret lies only in the need to untie certain people’s hands to raid and grab Church property, since they don’t have the brains to create something for themselves. And no matter how I try prove it, I will again hear the reply: “Mister! It’s written in the court ruling THIS WAY, so that’s how it is—hand over your property.”

And the silence in the “democratic” West is astounding. As if people think that this is just how it should be. Since the fall of Communism, when churches were given back to religious communities for use after years of destruction and persecution—who oversaw the restoration in modern Ukraine of churches and monasteries originally built by the historical, canonical Orthodox Church? The clergy and faithful of the Ukrainian Orthodox Church restored them through great pains and labors. Met. Pavel of Vyshgorod and Chernobyl

As the abbot of the Kiev Caves Lavra Metropolitan Pavel of Vyshgorod and Chernobyl announced after he was told by the Kiev Caves Museum administrator that after New Year’s Day the Church would no longer have access to the Holy Dormition Cathedral and the trapeza church:

“For thirty years, as the abbot of the monastery, I have been constantly here, and together with me 220 brethren who constantly pray for our state, for our army. And not only do we pray—we’re constantly working, trying to help all those in need, all those who ask us for prayerful intercession and help in their earthly life. No one informed us in writing at least a month in advance. We have long-term lease agreements, and the UOC has been responsible for the physical upkeep of the buildings.

“I know every stone here, every piece of land, because we built everything here with our own hands, with donations from the faithful... Although the state funded some restoration work, it took those funds back in the form of taxes…

“We can’t allow the buildings that were built by our holy ancestors to be destroyed.”

So it is clear that the Ukrainian Orthodox Church is about to face the same kind of persecution that they did under Communist rule. And just as no one seemed to care in the “democratic” West when persecutions were unleashed by the Communists in the early twentieth century, no one seems to care now, either. “Your Eminence! I turn to you as the head of the Constantinople Stavropegia in Ukraine, in hopes that the concepts of fairness and Christian conscience are not alien to you.

“The recent events connected with Church life in the Ukrainian Orthodox Church force me to address an open letter to you.

“Last Sunday at the Liturgy we read the Gospel in which Christ tells the parable of the good Samaritan. We know that the words of Holy Scripture should be the foundation of our actions, without which our faith is dead (Jas. 2:17). Today we are witnessing a tyranny against the Ukrainian Orthodox Church. Those who are called to watch after the safety and constitutional rights of citizens, have in recent weeks subjected not only the laity but also the priests and even clergy of that Church to persecution.

“We have to give due respect to the Christian humility of the First Hierarch and the flock of the UOC, that in these difficult times they continue to carry their cross with quiet prayers of gratitude on their lips, placing their only hope in the Lord. It must be noted that the witnesses to this lawlessness, who continually talk about 'one people', in fact act in the diametrically opposite way, showing only intolerance and religious enmity. We notice how supposed 'brothers'—Greek Catholics and the head archbishop—just silently walk by the UOC as if they don’t see anything and they don’t want to lift their voices against injustice; likewise, the 'clergy' of the OCU,2 whose 'Metropolitan' turns his face away from the lawlessness, and then falsely preaches about love of neighbor.

“Doesn’t it seem to you that we, the clergy of the Church that is first in honor, should not act so hypocritically? We should be raising our voice in defense of our brothers according to faith and blood! After all, you and I are also Ukrainians. We should not allow this tyranny by SBU3 to be committed, which resembles for all intents and purposes the Cheka-NKVD or the Nazi Gestapo—humiliating searches disrupting the church life of monastic communities, unfounded accusations of treason, and low provocations against the bishops. Even the offer was allowed of exchanging Orthodox [Ukrainian] clergy for Ukrainian army prisoners of war… In standing up for the truth, we must not fear politicians but only God:

“With this letter I bend my knee before Your right hand with one request: to raise Your authoritative voice in this unspiritual desert (cf. Matt. 3:3) and intercede before the President of Ukraine to cease this tyranny against our brothers in the UOC!!!

“But if ye had known what this meaneth, I will have mercy, and not sacrifice, ye would not have condemned the guiltless (Matt. 12:7).”

A month has passed, and no one in Constantinople or its “Exarchate” has said a word against this tyranny. No one has addressed the President, even as he signs a document enabling parliament to ban the ancient Orthodox Church—the majority Church in Ukraine. And no one is voicing any outrage at an unconstitutional ruling by a so-called Constitutional Court.

And please don’t send us any citations showing statistics in favor of the uncanonical OCU—it’s the utmost gall to steal churches and then claim that most of the churches in Ukraine belong to the OCU and not the UOC. And then to push the brothers out of the holiest sites in the whole country and say that the UOC has no monasteries.

By the way, the question has not yet been finally answered as to what the government intends to do with the Kiev Caves Lavra once it is no longer in the rightful hands of the UOC? After all, the OCU does not by any stretch of the imagination have the number of monks it would take to maintain the monastery. The faithful will not support them, either. The outcome remains to be seen, but one can only deduce that if the churches become a museum, people will have to pay to get into them. There is a precedent for this from Soviet times. Perhaps the cost of a ticket will be thirty pieces of silver…

2 The “Church” cobbled together from uncanonical bishops and priests in Ukraine by the Constantinople Patriarch.—OC. 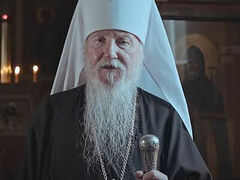 We’re on the eve of new persecution of UOC—ROCOR Metropolitan of Berlin (+VIDEO)
We mustn’t turn a blind eye to the Ukrainian state’s aggressive actions against the canonical Ukrainian Orthodox Church, warns a prominent hierarch of the Russian Orthodox Church Outside of Russia. 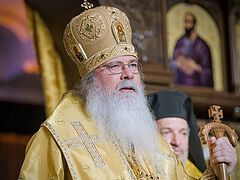 OCA primate issues statement on peace, support for Ukrainian Church (+VIDEO)
In this season leading up to the coming of the Prince of Peace in the flesh, His Beatitude Metropolitan Tikhon of Washington and All America and Canada, primate of the Orthodox Church in America, has issued a statement calling on all to pray and fast for peace. 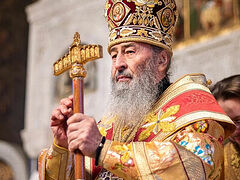 David1/2/2023 12:58 am
I agree with Gary and can’t help thinking, again, that “what began in Russia” continues in Ukraine and “will end in America.” BTW, Fr Petrunak and I are under the same patriarchal jurisdiction, and I wholeheartedly agree with him, too.

Editor12/30/2022 12:53 pm
To "Theo": We did not open your comment because for one, you are using the name of another commenter who would not say what you said; and two, you are repeating tropes that are simply misinformation.
×