Homily on the Sunday Before the Nativity of Christ, the Holy Fathers

Part 1: The memory of those who served in the preparation of Christ’s human nature We pre-celebrate Christ’s Nativity, and raising our minds, we are carried in thought to Bethlehem… We hear, my friends, on this last Sunday before the Nativity of Christ, the Holy Church’s call to deep contemplation on the essence of the approaching great feast.

The event that took place twenty centuries ago was so great, that there has never been one equal to it in the history of the earth. “A great mystery of piety, God was revealed in the flesh.”

Small, unknown Bethlehem, and in it, in a lowly cave, the poor “manger of dumb beasts” became for the whole world the center of attention and the reference point of a new era; for in it lay the Uncontainable Christ God.

God—the Ruler of the world—appeared as a humble Infant, in Whom at the moment of birth few could see God’s grandeur, glory, and power. But the world awaited this Infant from the beginning of its history, having received God’s promise in the prophecies concerning the appearance on earth of the Savior and Redeemer of mankind: And thou Bethlehem, in the land of Juda, art not the least among the princes of Juda: for out of thee shall come a Governor, that shall rule my people Israel (Matt. 2:6). And thus, with the birth of Christ came the end to all prophecies concerning Him. And what in the Old Testament was hidden in mist was illuminated by the appearance of the Divine Infant and became visible.

Many infants were born in Bethlehem—both notable and famous; but the world did not see in any of them the only One through Whom it could be saved, and in the expectation of Whom it languished.

Everything in the world changes only at the birth of Jesus Christ, for with Him the time of the law ended, and grace forcefully transformed everything living, wiping away the tears of hopelessness.

I will cite a rather distant analogy: All of us unmistakably recognize the activity of divine grace on our hearts and souls. Everything changes in us—our faces shine, our eyes radiate joy and light, and grace-filled peace calms our hearts. This not only happens in us. When grace touches us, it transfigures everything around us—nature, against its own laws, responds to what is happening with us.

The same thing, albeit incomparably more manifestly, did the world feel at the birth of the Divine Infant Christ. And it could not be any other way, my dear friends, for the Eternal One appeared in time, and the Bodiless One appeared in the flesh; and with Him eternity entered the world. And everything living was illumined by the uncreated light of the Divinity and eternity. The Church sings, “The mystery is born in a cave, but heaven, as lips, declares Thee to all…”

Christ is born, both God and Man, and His way of the Cross began with His birth—the labor of saving the world and the creation of a new man, sons of God.

But the Bethlehem cave that held the humble grandeur of the Son of God and Son of man became the prototype of the Holy Orthodox Church, where every day at the celebration of the Liturgy, at the proskomedia, like in the manger, the Divine Infant Christ is placed on the table of oblationж and He contains in Himself His whole life from birth to the great sacrifice on Golgotha—the Lamb of God, which taketh away the sins of the world (Jn. 1:29).

Every year and every day the world relives the Mystery of Christ’s life on earth. Every day, Christ is born, serves, dies, and resurrects, resurrecting the world with Himself. And before the face of eternity all the “days of the flesh” of the Lord Jesus Christ are as one moment, in which the incarnation, death on the Cross, and resurrection are bound into one.

For God, one day is as a thousand years, and a thousand years is as one day; and this is eternity, invading earthly time. And our lives are also an example of this, for they also flow into eternity, wiping away time. Just look back on your life. It had only begun when it already began hurdling towards its end, and the boundless ocean of eternity is ready to swallow us.

The human heart should also in the brief moment of its life become an image of the Bethlehem cave, where Christ—God and Man—is born, grows, lives, and reigns. And in opening up to receive Christ the Savior, our hearts are illumined by His divine light and become strong with His divine power. And the “beasts”—our human passions living in our hearts—run from it to the outer darkness; and then we can bring a pure heart to God as a gift—our love, co-reigning with Christ and God.

Today, at the threshold of the Nativity of Christ, when earthly time was divided in two like an altar curtain, and the world was changed into “before” and “after” the Birth of Christ, the Holy Church remembers with grateful memory those who lived by faith and expectation, and who by their lives and their flesh became the relatives of the God-Man Who appeared in the world. After all, Christ is God Who partook of mankind, not a Man newly-created by God; however, his humanity also descends from the history of mankind who lived on earth before the Nativity of Christ.

Mankind wrought in its womb, in its depths, her who became the Mother of God, more honorable than the Cherubim and beyond compare more glorious than the Seraphim.

And so the prayerful memory of those who served in the preparation of Christ’s human nature is now raised up in the Church: The book of the generation of Jesus Christ, the son of David, the son of Abraham, Abraham begat Isaac; and Isaac begat Jacob; and Jacob begat Judas and his brethren… we hear the words of the Gospel today (Matt. 1:1–2). And further there is a long list of names and more names. Behind every name is a specific person, who participated through his life in the birth of Christ the Savior. From millennia to millennia was woven the flesh and humanity of Christ.

And we cannot but note, my friends, one comforting thought.

In this ladder of human names is preserved for us the memory not only of those who achieved sanctity by their lives, but also those who passed through sin, lived through human infirmity and sought from out of the darkness light, truth, and sanctity. And man did not always realize his longings and dreams, but he lived by faith, walked to God, and wanted to live in God.

Christ united with the human race, choosing in it not only the righteous, and not only saints. He Himself, being tested by sin, knew the measure of human infirmity and weakness, and having been like man in everything but sin, through His divine love incarnated everyone in Himself and redeemed all through Himself.

By His human sanctity Christ justified all: both those who were His flesh and blood, and those who were born in spirit of Him. Both Old Israel that lived before the birth of Christ, and the New Israel, we who appeared in the world along with the Birth of Christ under the shelter of divine grace, are united by the same feelings that are in Christ Jesus. Faith, hope, and love are the main feelings. And it is precisely these feelings that make us familial and close regardless of the time and space that separates people. These feelings can be called simply, the thirst for God.

The Old Testament holy fathers, “sitting in darkness and the shadow of death”, worked miracles through faith in the fulfillment of their expectation: subdued kingdoms, wrought righteousness… stopped the mouths of lions. Quenched the violence of fire… They were stoned… (Of whom the world was not worthy:) they wandered in deserts, and in mountains, and in dens and caves of the earth (Heb. 11:33–34, 37, 38).

I will not recall the labors of faith of the Old Testament fathers. I will only remind you, my dear friends, that they did not weary of expectation and lived by patience and hope not one day, not one year, and not a hundred years, but 5508 years. How many generations sank into oblivion over those thousands of years.

But this expectation was their inner need, for God was with them. And, These all died in faith, not having received the promises, but having seen them afar off, and were persuaded of them, and embraced them, and confessed that they were strangers and pilgrims on the earth (Heb. 11:13). Testifying by their lives to the truth of their faith, they sought and strove for what is better—that is, for the Heavenly Fatherland, the Artist and Builder of which is God.

And so the time was fulfilled—Christ God was born, and God initiates a new series of His saints. And we sinners stand in this series by the Lord’s grace.

Holy Apostle Paul calls Jesus Christ the new Adam, from whom came new and holy descendants, adorned by His name and foreordained to eternal salvation. This great posterity consists of Christians who have received His teachings, were born of water and the Spirit in His name, being fed with His Divine Body and Blood in the Sacrament of Holy Communion, nourished and living in the bosom of His Church.

Our familial ties with Christ are not fleshly but spiritual, and they require a continual affinity with Him in our thoughts, senses, desires, and strivings. And having in comparison with Old Testament mankind a higher advantage—filial closeness to God, the gifts of grace that strengthen, illumine, and enlighten the whole man, and an undoubting faith in the future life—we should nevertheless be attentive to ourselves in order to be one in spirit with Christ not only by birth, but also by our lives. For we also bear in ourselves, just as our Old Testament forebears, the infirmity of fallen human nature. But we no longer cast our gaze from side to side with cries for help—we know that God is with us! With us are living examples of many, many saints of God, calling us to follow after them on the path of salvation. 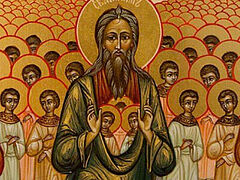 The Hidden and Obscure is Illuminated and Manifested
Archimandrite John (Krestiankin)

The Hidden and Obscure is Illuminated and Manifested
A Homily on the Sunday of the Holy Fathers
Archimandrite John (Krestiankin)
The event that took place twenty centuries ago was so great that it has no equal in all of history. 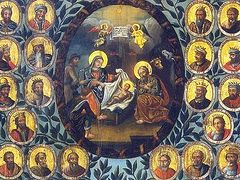 The Mysteries of Christ’s Geneology
The meaning of names in the Bible
Archpriest Oleg Stenyayev
All biblical names speak, and were most often given to people from a certain prophetic inspiration. No translation is capable of fully revealing the beauty of the whole spectrum of biblical names and images. 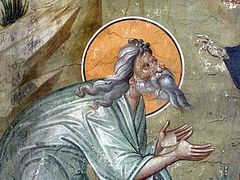 The Sunday Before the Nativity
Epistle, Gospel readings and commentary

Rdr Isaac Pearson1/2/2023 7:06 pm
Thank you nun Cornelia for translating this wonderful homily of father John Krestiankin, or should I say, saint John Krestiankin, for surely he will soon be canonised. Once again our beloved Archimandrite delivers a homily of rare depth and profound illumination. Such wisdom hath this man of God. Truly an inspiration for our times.
×