How Mind, Heart and Politics Prepared for the First Coming of Christ

The Old Testament is the story of the preparation for the Coming of Christ. In the descendants of Abraham God prepared human nature, through philosophy He prepared the human mind, through world religions—human hearts, and through politics—the fruitful preaching of the Apostles. The famous German philosopher Karl Jaspers (1883–1969) introduced the term “the Axial Age”. It was the period between about 800 and 200 BC. It was the time of the spiritual awakening of mankind. It cannot be explained other than by a direct action of God’s Providence. What is an axis? It is a rod connecting a pair of wheels. Hence the “Axial Age”—the time when humanity was given an incentive to move forward. It was the time before the Birth of Christ. It all began in Judea, where the prophet-writers appeared on the historical arena. Like a bolt from the blue, their call for life with God resounded throughout the universe. At the same time religious philosophy emerged in Greece, with the schools of Pythagoras, Epicurus, Plato, Aristotle, etc. Religious movements appeared in India: Buddhism and Hinduism; China produced such philosophers as Lao Tzu and Confucius; and Zoroastrianism was founded in Persia. Remarkably, it was all shortly before the Birth of the Savior. This was all the preparation for His First Coming.

The Providential preparation went on at all levels of human nature: heart, mind, body and politics.

How were people’s hearts prepared? All teachers of the Axial Age spoke of virtue. The prophets are of primary importance to us here. The minor prophet Amos, the author of the first prophetic book of the Bible, and all the others after him unanimously called for purity: For thus saith the Lord unto the house of Israel, Seek ye Me, and ye shall live… But let judgment run down as waters, and righteousness as a mighty stream (Am. 5:4, 24). The heart of the chosen people, in which Christ would be born, was being prepared by the prophets. The hearts and minds of the Gentiles were being prepared to receive the Gospel by wise men of the West and the East. Philosophy prepared the mind, which would later serve Christian theology. The culture and asceticism of pagan Hellenism prepared the body, and the ascetic teaching of philosophers were later churched by Christian ascetics.

Everything would be subordinated to serving the Incarnate God and His Church. Everything was for the sake of the Coming of Christ, Who would put first the love of God with all your mind, heart, soul and body.

On its best side, humanity had been prepared for the better, but on the other, shadow side, it had become petty. At the turn of the old and the new eras mankind found no joy in anything. The victorious Roman Empire, which brought roads, order and security to many peoples, did not bring the meaning of life into their hearts.

Roman society was interested in the East, where all religions were born. If the West gave science to the world, then the East produced all world religions. Most of all, the civilized part of mankind was interested in Judea. Not only because the descendants of Abraham were scattered across the globe and tried to preserve their cultural and national identity—the Jewish religion was the only monotheistic religion in the world at that time. Against the background of the “desert” of Roman and Greek polytheism, the Jews were like a beautiful oasis. All spiritual searches inevitably stopped at the religion of Moses.

This was greatly facilitated by the political factor. God had also prepared politics for His Coming.

Rome conquered the entire known, civilized part of mankind. The Empire’s territory stretched from the British Isles to the Tigris and the Euphrates; it comprised the whole of North Africa, Asia Minor and Europe. The Mediterranean Sea was the empire’s inner “lake”. All these lands were one country; there were good roads, security, and there were bearers of Greek culture and language everywhere. When the apostles went preaching, they could bring Christ freely to everyone.

Alexander the Great brought Hellenistic culture to the Mediterranean, and everyone began to speak Greek—the richest language in the world. The books of the New Testament were written precisely in Ancient Greek. The philosophy of Plato and Aristotle served Christian theologians and with its help they were able to accurately express in human language what the Lord had revealed in the Bible. God enabled the human mind to work with Him. When God became Man, He took upon Himself everything that’s human, making us His co-workers. This demonstrates that God does not regard us as His slaves, but co-laborers, “partners” in the work of salvation. For Him we are important, valuable, and precious.

The Birth of Christ was “planned” by God and the world had been looking forward to it. With all its external successes, civilization had been literally decaying in vice and despair. For example, the philosophy of Stoicism, popular at that time, promoted fatalism: “If fortune has turned away from you, die beautifully.” Stoicism considered it a virtue to commit suicide. It is hard to believe, but the great Seneca preached this too and eventually took his own life.

Thus, we can come to the conclusion that the Nativity is not just “a winter holiday”, but a turning point in history, something that literally shook the whole world. The first time humanity heard angelic singing was at the Birth of Christ. It was something extraordinary. The angels contemplated God for the first time in a manger, but no one had ever seen God with their own eyes. And now God has become incarnate, taking upon Himself “matter”; now He calls the body His own (for example, the service of the Passion has the following words: “My hands are being nailed, they are beating Me on the cheeks”). He was born, He was in obedience to His Mother and adoptive father.

The Nativity of Christ is comparable to the new creation of the world. Why did God come? What was the purpose? To create a new humanity, to “restart” history that man had made a mess of. We must understand that the First Coming of Christ was needed because man had fallen away from God. There was a tragedy at the dawn of the history of the world—everything that God created was good, but man did not want to live in it and abandoned God. The Lord was not angry or offended, but showed longsuffering and mercy to man.

The Birth of Christ is not just lightning—it is a new light; from now on the Sun has been lit on Earth. There was darkness, and now the sun has risen; we lived in darkness—and now we live in the Light. We take the Gospel as an ordinary book, although if you read it carefully, it contains extraordinary stories. When you penetrate into the spirit of the Gospel, your heart is turned around and cleansed.

Christ came to remove evil from man. What would have happened if He hadn’t come? Definitely, there would have been a twilight of humanity. By the time of His Birth, life had come to a standstill. The idea was in the air that something must be changed, but there was no strength for it. The best minds had been saying for centuries that changes were coming. For example, Plato said approximately the following: “We do not know how to live on unless God comes down from Heaven and teaches us how to relate to Him and to each other.”

Lastly, what humanity had anticipated was coming true. Prophecies were coming true—Christ was born in Bethlehem and born of the Virgin.

Christ took upon Himself our human nature, which theologians call the kenosis, or self-emptying of the Godhead. Only Christianity is based on the self-emptying of God for the sake of love. God became Man so that man might become God, as the Church Fathers said. From now on we have received Baptism with the Divine Fire to be as pure as gold, for fire makes gold stronger.

No other religion show such high an example of morality as Christianity. Even the enemies of Christ could not accuse Him of anything and needed false witnesses to put Him on trial. In no other religion does God become an Infant, a Youth, a mature Man, and a dying Man. And in order to conquer death, the immortal God had to take on flesh, die, and destroy death, conquering it with His Divine power. From now on we have a perfect example of how we should live.

For His Incarnation, for His Birth, God had to educate humanity for thousands of years. God had to “do” a lot of things in order to be born and live among us. For a long, long time, with tears through the prophets He had begged us to abide in the truth. He waited until the One Who would be able to contain the Divine would be born. All the commandments were for the sake of the birth of the Mother of God. The Old Testament Temple and the Holy of Holies were for the birth of the Theotokos.

The Lord made Judea salt. The civilized (reading, searching and thinking) part of the world looked at this small area with hope, from where salvation was to come.

There was something in the air, something was about to happen. When the apostles came with the news that Christ was risen, that God descended from Heaven, became a Man and conquered death, that Life had triumphed at last, it was received with great joy.

The Lord was born in quiet Bethlehem, in a manger where animals breathed and where there were only righteous people. He came for you, man, so that you may become different—better, purer and God’s child by grace. 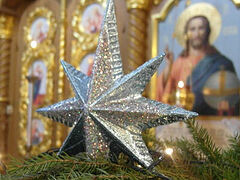 Vouchsafed the Visitation of the Lord
Hieromartyr Thaddeus (Uspensky)

Vouchsafed the Visitation of the Lord
A Homily for the Feast of the Nativity of Christ
Hieromartyr Thaddeus (Uspensky)
Let us delve into what Christ has done, so that the trace of His “visitation” to our souls would be more enduring. 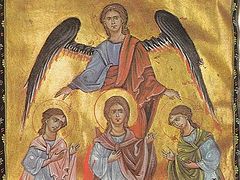 All the Best to God!
On the Feast of the Prophet Daniel and the Three Youths Shadrach, Meshach, and Abednago

All the Best to God!
On the Feast of the Prophet Daniel and the Three Youths Shadrach, Meshach, and Abednago
Priest Roman Savchuk
There is a constant struggle between Heaven and earth playing out in our hearts. Taking every next step in life, we must firmly decide what to dedicate it to, what to expend our strength, our aspirations, and hopes on. At the same time, the world—earthly needs and cares, behind which lurk the devil’s charms, constantly strive to divert all the best powers of the human soul. 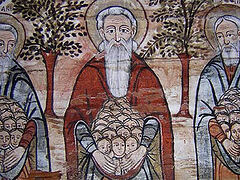 How Do God’s Promises to Abraham Concern Us?
Sergei Komarov

How Do God’s Promises to Abraham Concern Us?
Sergei Komarov
All of our hope and our thoughts should strive to go there, “to the Heavenly… to the Heavenly… to the light…,” as said the dying St. Gregory Palamas. There God shall wipe away all tears from their eyes; and there shall be no more death, neither sorrow, nor crying, neither shall there be any more pain: for the former things are passed away (Rev. 21:4). Let us turn our hope there and let us believe: It will not put us to shame, for the promises of God are immutable.
Comments
×