Awakened from the Night of Dark Delusion

A Homily for the Feast of the Nativity of Christ Although the hymns of today’s feast are very touching and edifying in themselves, it wouldn’t be unfruitful to gather the salvific impressions received from them, especially focusing on one thing—that these saving impressions not be immediately obliterated upon leaving the church. A solemn, festive word should serve this purpose. However, my present homily won’t be such, although aware of my duty, I am resolved to open my mouth and not remain silent on this present feast.

Without dwelling on individual impressions caused by this feast that has arrived, let us now dwell on the general sentiment with which we experience these impressions. Turning to the impressions of childhood, probably everyone remembers those minutes in his life when the feast of the Nativity of Christ made his child’s heart flutter with joy. This feast inspired, enlivened, and gladdened the heart. But after childhood passes, do most people experience such a sentiment? There are not a few such people for whom the great day of the feast is no different from other days of the year: They don’t esteem one day above the other (Rom. 14:5), but not because they dedicate every day to the Lord equally, as the Apostle teaches, but because they treat all feast days with equal coldness.

Such cooling comes from the fact that in the days of childhood a simple and pure faith lived in the soul, but then the soul seemed to be riddled with doubts, like the walls of a ship, pierced everywhere by deadly weapons during a bombardment. And it is with such a ship that many, perhaps the majority of modern Christians, have to cross the stormy sea of life. Perhaps our ancestors were happier because, although they were sometimes no strangers to coarse passions and vices, even indulging in them sometimes on the days of great feasts, the very root of the spiritual life, of faith, was preserved intact in them. With this, even after the Fall, it was easier to direct life according to the commandments of Christ and show the highest impulses of the soul to good.

Now the coarse passions don’t always manifest in people in their former uninviting nakedness—their service has become more covert and refined—but without the light of faith, life has become even more gloomy. Many no longer even feel they can go on living, such that the slightest reason is enough for them to end their life by suicide. Moreover, if now the manifestation of certain passions has become more refined, that absolutely doesn’t mean that people have become freer from them. On the contrary, we can say that people’s attachment to the earth with its goods and pleasures is only growing and deepening.

It is this deepening attachment to the earth with its deeds, cares, and thoughts, and nothing else that kills faith, clipping its wings. After all, we’re observing a decline in faith not only in God and His Christ, but even in everything sublime and holy.

For example, how rarely we find in modern people even a completely disinterested attraction to any arts! Art is the fruit of free inspiration, but it also attracts modern people a little by itself: Even when they give themselves up to the impulses of this inspiration, they don’t stop searching for the gratification of their selfish inclinations.

That’s why, if we find faith in modern people, even completely wistful, sometimes directly contradicting reality, it’s only in relation to what feeds the love of the earthly carnal life: They don’t want to believe in Eden, which the incarnate Son of God opened to men, but they willingly believe in dreams of the earthly paradise of socialists. That’s why so many people today connect the idea of the present feast not with the Church hymns that make it a spiritual celebration, but first of all with the amusements of various kinds of theaters, dances, masquerades, dressing up, fortune-telling, and so on. At the least, it’s not the hymns of the feast that are dearest to the hearts of such people.

Oh, if the sublime hymns of today’s feast would raise and revive our spirit, and not just the flesh, which constantly and strenuously fights against the spirit (Gal. 5:17). For this is why “God has come down to earth,” according to the Church hymn, “that He might raise us up to Heaven.”1 It wasn’t for this that God appeared in the flesh (1 Tim. 3:16), that we might live according to the flesh, according to our carnal passions and lusts, but to help us be delivered from them. This is why He partook of the infirmities of our human nature, so that He could be the faithful guide to the Heavenly Father for those of us who are beset by the infirmities of the flesh. If The first man is of the earth, earthy, then the second man is the Lord from Heaven… And as we have borne the image of the earthy, we shall also bear the image of the Heavenly (1 Cor. 15:47, 49). May the hymns of the present feast revive love for Christ in us, which was nurtured in us from the days of childhood, so that being led by Him, we might be more easily preserved from the temptations and deeds of darkness on this bright feast; so that we, like the foolish Galatians, in the words of the Apostle, having begun with the spirit, might not end with the flesh (cf. Gal. 3:3)!

And if we’re unable to do this ourselves, let us more often call out with the holy Church: “From the night of deeds of dark delusion we watch vigilantly, and sing to Thee, O Christ, as to our benefactor. Come to us and grant us cleansing: Make the path easy for us, whereby we may ascend and so attain to glory!” That is, come to us, who now, upon awakening from the night of the deeds of dark delusion sing a hymn to Thee, Christ, as benefactor: come and grant purification and a trustworthy path along which we will attain to glory.2

2 Second Canon of the feast of the Nativity of Christ, Irmos Ode 5 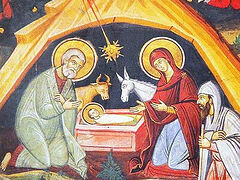 The Deep Meaning of the Nativity of Christ
Met. Athanasios of Limassol

The Deep Meaning of the Nativity of Christ
Metropolitan Athanasios of Limassol
And may these holy days pass as a judgment over our conscience, our entire lives, and our actions, because only then will we be able to say that they were unto our salvation, because they provided us with the means for spiritual struggle in repentance, humility, and a change of life, and at the same time, encouraged us to turn to God, to entreat His great mercy with humility and love. 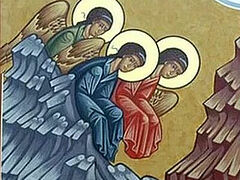 Homily on How We Should Greet the Day of Christ’s Nativity
St. Ambrose of Milan

Homily on How We Should Greet the Day of Christ’s Nativity
St. Ambrose of Milan
Brothers! If the sons of this age, for the sake of temporary honor, greet the birthday of their earthly king with such preparation, then how must we greet the birthday of our eternal King Jesus Christ, Who for our zeal toward Him will reward us not with temporary but eternal glory, and vouchsafe us the honor not of an earthly ruler that passes on to his successor, but of a heavenly kingdom, which has no successor? 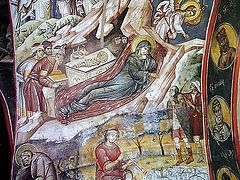