“What is the Star of Bethlehem like? Is it blue?” Dimka [a diminutive form of the name Dmitry.—Trans.] asked his mother.

“Maybe gold, maybe blue… I only know one thing: it is very beautiful,” his mother answered pensively, closing the Children’s Bible. “Sleep, my darling. Tomorrow you will go to the Vigil with us.”

She turned off the light, kissed her son on his warm cheek, and whispered as she left:

The next day work was in full swing at home: the Christmas tree was decorated, cakes were being cooked, and the festive table was being prepared. There was a smell of onions, garlic, tangerines, apples, oranges and other food. Dimka wandered around the apartment in the vague expectation of the upcoming feast of the Nativity of Christ. And since the Christmas tree was already decorated and his mother had asked him not to get under her feet, the child was sent to the nursery.

“And yet, what is the Star of Bethlehem like? On icons it is gold, on Christmas cards it is multi-colored, shiny and blue. If only I could see it…” Dimka thought, standing by the window. Night was falling, lights were appearing in the neighboring houses, but the sky was dense with clouds. The frost was making intricate patterns on the windows.

When all the preparations were over, the mother took out a new suit and a beautiful blue shirt (like Dimka’s eyes) for her little son, and the family solemnly began to get ready for church. They wrapped Dimka up warmly, tying a scarf almost over his eyes, putting his feet into felt boots and pushing him through the door. So a kolobok [the round bread loaf from a famous Russian folk tale.—Trans.] rolled out into the street, consisting of a thick fur coat, large felt boots, fluffy mittens, a shaggy hat, a warm scarf, and two open eyes that shone in the small gap between the scarf and the hat.

“Dimka, come on quickly! We will have to drive through the whole city,” the mother picked up the child and put him in the back seat.

Dimka was about to burst into tears:

“What Christmas is it without the Star? After all, it is said in the Bible that it shone for everyone—the Magi and the shepherds. What about us?”

“Dimka, it’s still behind a cloud. Don’t worry: the night is long, and we’ll have time to see it,” his father reassured the child.

The car started off smoothly and rolled around the city, which suddenly became like a fairy-tale. The “gray-haired” Angara River smoked with mist; there were trees dressed in bizarre snowy lace, and the blue air sparkled in the frost. The snow-white Church of the Icon of the Mother of God “Of the Sign” stood surrounded by trees, dressed in such rich “fur coats” that their lower branches sank under their weight. Nature froze in anticipation of a miracle. Only crackling on the river, coupled with the squeaky steps of people running to the church, broke the solemn silence.

The church was ablaze with lights, inviting everyone to the great feast. The people were joyful and shining. Everybody was greeting each other, embracing and kissing one another. Someone even brushed away a tear, someone else asked forgiveness, and someone else forgave.

Dimka, now freed from the heavy clothes, was standing in the middle of the church and looking at all this splendor, with his admiring eyes wide open. “Wow, how beautiful!” he thought, forgetting everything in the world. Everything around him was shining and moving, and he, looking at the altar, saw an icon in front of him, where the Most Holy Theotokos was depicted at full height, holding the Infant Jesus Christ in Her arms.

“I’ve come to visit You, O Most Holy Mother of God and our Lord Jesus Christ,” the child suddenly thought. He began to recall everything that his mother would read and tell him about the Birth of Christ, about the Magi and the shepherds guided by the Star of Bethlehem and by angels respectively, about the cave, about Joseph the Betrothed, about young Mary the Virgin, about the manger where the Divine Infant lay with His eyes brighter than the stars, about the lambs warming the manger (after all, the Baby needed warmth, as Dimka’s mother explained), about the reverent silence that began to reign on earth as the Holy Night fell.

He did not notice how the service started.

“Thy Nativity, O Christ our God, shined the light of knowledge upon the world: for therein they that adored the stars were taught by a star to worship Thee, the Sun of righteousness, and to know Thee, the Dayspring from on high: O Lord, glory be to Thee.”

Everything around him was singing, sparkling, and rejoicing.

Many of Dimka’s peers and other younger and older children had long been quietly napping on folded clothes in the corners of the church. Their mothers and grandmothers carefully lifted them up and led or carried them to the chalice.

Dimka’s mother brought the child to the chalice, loudly pronouncing the name “Dimitry”; and the priest, so handsome and solemn in brilliant vestments, gave the child Communion and showed him how to kiss the base of the chalice. And... though always so strict at the moment of Communion, the priest suddenly smiled. Without uncrossing his arms from his chest, Dimka went up to the side-table where his mother gave him antidoron with warm water and wine and whispered gently: “My little son, my joy, I greet you on the great feast and congratulate you on receiving Holy Communion and the first festive service that you have been able to attend with us. Thank God!”

“Hello, Dimka! Happy feast!” Suddenly someone picked him up. The laughing eyes of two female students were looking at him. They were smiling and congratulating him and his mother, and then one of them took out something and put it into the boy’s hand.

“We made it especially for the feast, but we didn’t know who to give it to. We hoped the Lord would prompt us. Here you are, the servant of God Dimitry! It’s a present for you!”

The wave of oncoming sleep instantly vanished. The amazed child had a small eight-pointed star on his palm. Bright, golden and strewn with sparkling spangles, it was burning and shimmering so brightly that Dimka was dumbfounded. And when he “came to himself”, he exclaimed joyfully:

“It’s golden! Now I know for sure: the Christmas Star is golden!”

The parents dressed him, already sleepy, as they were going out, and took him into the car. It was dawning. The car drove almost in the dark along the foggy bank of the Angara. The morning frost was getting harder. It seemed as if crystals were sounding in the air. The father, watching the road, hummed the troparion of the feast, while the mother whispered under her breath: “Virgin Theotokos rejoice...” It was a little creepy to drive in the fog, but nothing could frighten Dimka, who was already sleeping. There was a bright smile on his serene face. Prayer resounded in his dream: “Glory to God in the highest, and on earth peace, good will toward men”, and faces and the light of candles flashed... Suddenly everything disappeared, and Dimka saw in a soft light the Most Holy Theotokos Herself, Who was holding the Most Pure Divine Infant Jesus Christ in Her arms. She was smiling, and the Infant held out a shining star—the same one that the sleeping child held tightly. It was the Christmas Star, radiating quiet light from the faraway and ancient land of Bethlehem. 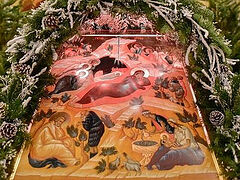 A True Nativity Story
Priest Dimitry Fetisov
“Well, now it’s all clear—he’s schizophrenic. Now the main thing is not to let him manipulate me. Once he sees my weakness, anything can happen...” flashed through the priest’s mind. 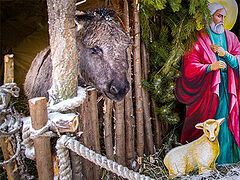 How Christmas Saved a Donkey’s Life
Marina Schmeleva
There was a donkey that lived in the Yablonevka village of Rovny district. It was an untamed, wild, and scruffy-looking animal. It used to run around aimlessly in the vicinity of the village terrifying its residents with its plaintive braying. 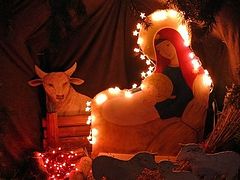