The Founding of Jerusalem

Meeting in the King’s Valley And the king of Sodom went out to meet him after his return from the slaughter of Chedorlaomer, and of the kings that were with him, at the valley of Shaveh, which is the king’s dale. And Melchizedek king of Salem brought forth bread and wine: and he was the priest of the most high God. And he blessed him, and said, Blessed be Abram of the most high God, possessor of heaven and earth: And blessed be the most high God, which hath delivered thine enemies into thy hand. And he gave him tithes of all (Genesis 14: 17-20).

The valley of Shaveh, which is the king’s dale, where Abraham, returning from the campaign, met the two kings at once, the king of Sodom, and the king of Salem, as is argued by the famous Jewish historian Josephus Flavius, is none other than the valley of Kedron (or Josaphat) near the present-day Jerusalem. However, historians have produced alternative versions on this particular subject...

Everything seems clear about the king of Sodom—he is the very same Bera, who led a coalition of five cities that rebelled against Chedorlaomer of Elam. The Bible says that Bera did not die in the battle in the valley of Siddim, because he fell into a pit of tar while fleeing with the king of Gomorrah.

When the battle was over, Bera apparently crawled out of his pit and there he was, on his way to meet Abraham. And he even came down handsomely, choosing not to take any of his property that the strangers from the north happened to appropriate, but this time around brought back, along with the other spoils.

And the king of Sodom said unto Abram, Give me the persons, and take the goods to thyself. And Abram said to the king of Sodom, I have lift up mine hand unto the LORD, the most high God, the possessor of heaven and earth, That I will not take from a thread even to a shoelatchet, and that I will not take any thing that is thine, lest thou shouldest say, I have made Abram rich: Save only that which the young men have eaten, and the portion of the men which went with me, Aner, Eshcol, and Mamre; let them take their portion (Gen.14:21-24).

And here, next to the lowliest of the kings of the land of Canaan, there stood yet another man—Melchizedek, the king of Salem, the priest of the Most High God.

The great descendant of Ham

A king and a priest Melchizedek is undoubtedly one of the most mysterious figures in all of the Holy Scripture. What does it mean, priest of the Most High God? After all, the temple in Jerusalem wouldn’t be built yet for another thousand years! What does it mean, the king of Salem? Why did Melchizedek show up in this valley, along with that ill-fated king of Sodom?

Let’s hear what the Holy Hierarch Demetrius of Rostov has to say, who, at the turn of the seventeenth and eighteenth centuries thoroughly studied the ancient patristic interpretations:

“Many have written various opinions about Melchizedek. Some of the Jews believed that he was Shem, the son of Noah, or perhaps Noah himself, while others saw him as Enoch. Origen and Didymus regarded Melchizedek as an angel, and some of the heretics said he it was the Holy Spirit... But may it be known to us that Melchizedek was like us in everything; he had a mother and a father of the tribe of Chem and he was one of the kings or princelings of the land of Canaan. But among all of the Canaanite kings, he alone knew the one true God, Who created heaven and earth; and he served Him with pure sacrifices, and he was the king in the city of Salem...”1

“He probably... descended from the peoples who lived in Palestine; for he was their king and also the priest. So simple and natural is this last opinion, to such an extent that all others contradict every word in the story of Moses... He was the priest of the Most High God... Melchizedek was the glorious minister of the true God in all of Palestine. In this, nothing is impossible for those times, for the iniquity of the Amorites is not yet full...”2

A long, long time ago, even before the flood, the righteous Seth bore a son, who was called Enos. Then, the Scripture tells us, began men to call upon the name of the LORD (Gen. 4:26). Here it speaks, according to many exegetes, of the beginning of public worship. So Enos, son of Seth, may be called the first priest of God Almighty in history. And then, immediately after the flood, the righteous Noah would make sacrifices to God.

Melchizedek was the last representative of that primitive priesthood, and we find references to this in the story of Enos and Noah

“Melchizedek,” explains the renowned Russian biblical scholar Lopukhin, “was the last representative of that primitive priesthood, with references found in the story of Enos and Noah (Gen. 4:26, 9:9); This is... the service of the religion of primitive revelation, whose vestiges, like stars on a dark horizon, continued to persist even in the gloom of pagan superstition and idolatry.”3

Well, then, we seem to have determined why Melchizedek is called in the Scripture the priest of the Most High God. It is time to figure out what’s with that city of Salem.

Where was the ancient Salem located?

Let get back to the “Cell Chronicler” by Holy Hierarch Demetrius of Rostov:

“We think that this Salem wasn’t Jerusalem, even if many believed it was, calling Salem, Jerusalem; it was a different city. Because Salem was in the district of Manasseh, near Enon and Scythopolis, by the Jordan River, whereas Jerusalem (was)... on Mount Moriah... where Abraham offered his son Isaac as a sacrifice to God when there was no city there as yet, but rather an empty place inhabited only by a few neighboring farmers. But when Melchizedek met Abraham returning from the battle, Isaac wasn’t even born yet. Hence it appears that Melchizedek was the king of the Salem that was near the Jordan, not far from the place where John would later baptize people at the time of Christ...

As for the fact that Melchizedek is said to have been the founder of Jerusalem: He could do it perhaps only after Abraham has offered Isaac as a sacrifice on Mount Moriah. This narrative may be true, namely, that the holy man Melchizedek... moved here from Salem, located near Jordan, and founded a city, naming it Jerusalem.”

Therefore, the Holy Hierarch Dimitry is convinced that Salem should be understood as the city ruled by Melchizedek, and not a present-day Jerusalem that was simply non-existent at that time, and located in the north of the Holy Land, not far from Beth Shean (Scythopolis), slightly away from today’s Route 90 and the checkpoint where the tourist buses always stop in our days.

Indeed, the pilgrim Egeria in her Diary (fourth century) gives testimony to the ancient tradition of veneration of this particular place as the capital of the righteous Canaanite king. Here is how she described her journey along the Jordan Valley:

“In that valley there was a large village, which is now called Sedima. The village, which is situated in the middle of the level ground, has in its midst a little hill… around the little hill great and ancient foundations appear, while in the village itself some grave-mounds still remain… I asked what it was, and it was told me: This is the city of king Melchizedek, which was called Salem, but now, through the corruption of the language, the village is called Sedima.”4

What caused the king-priest to travel at that time to the south, to the valley of Kings, that is, practically the area where the present-day city of Jerusalem is located?

We couldn’t find a direct answer to this question from the holy fathers, so we’ll venture to put forward our own explanation...

2 Philaret (Drozdov), the holy hierarch. Commentary on the Book of Genesis.

4 Taken from the book by H.Furst-G.Geiger. Terra Santa (Italian translation). 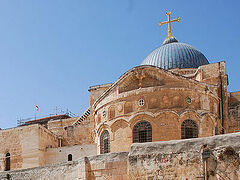 I Was Converted to Christianity by Apostle Paul
Raphael Musan-Levi

I Was Converted to Christianity by Apostle Paul
Raphael Musan-Levi
Why did I choose Orthodoxy out of all possible denominations? Because only in Orthodoxy I could find the continuation of the Church of the Old Testament and it was the only denomination that had apostolic succession. 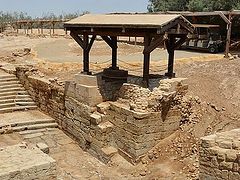 Al-Maghtas. The Place Where the Lord Was Baptized
A Photo Gallery
Anton Pospelov
In 2015 Al-Maghtas was added by UNESCO to the World Heritage list as a site associated with the Baptism of Jesus Christ. 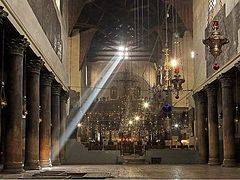 Bethlehem, the Birthplace of Christ
Michael Skaballanovich
This essay was written in the early twentieth century by the excellent Russian Orthodox theologian, exegetist and liturgical scholar Michael Nikolaevich Skaballanovich (1871-1931). Master of Theology, Doctor of Church History and teacher at the Kiev Theological Academy for twelve years, M. Skaballanovich was eventually repressed by the Soviet Government and died in exile in Arkhangelsk at the age of sixty.
Comments
×