The abbot of the Georgian Orthodox Church’s famous Gelati Monastery was injured when a fire broke out in the monastery guest house last night.

Based on information from the local diocese, the Patriarchate of Georgia’s Public Relations Service reports that a guest house bed caught fire from the nearby fireplace. Thankfully, there were no guests in the building at the time.

Passing by, the abbot, Archimandrite Ioseb (Burjanadze), entered the guest house to put out the fire, during which he was seriously injured.

He was taken to the hospital for treatment.

May God grant Fr. Ioseb a fully and speedy recovery!

According to the Georgian outlet Top News, this is the second fire at the monastery in a matter of months. Another building was damaged in a blaze in October.

Gelati is a medieval monastery complex in western Georgia. Founded in 1106 by King David IV of Georgia, it is among the oldest monasteries in the country.

The monastery is a great example of the Georgian Golden Age. Some murals date to the 12th century. It became a UNESCO World Heritage Site in 1994. 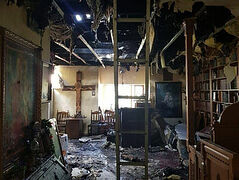 Fire leaves Georgian nuns without a roof over their heads as winter approaches
The fire broke out on Tuesday morning, completely destroying the roof at the monastery located just outside of Tbilisi. 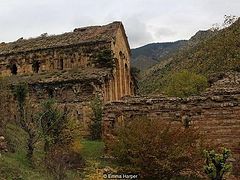 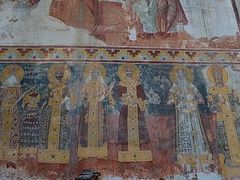