The liturgical life was revived in yet another Russian church, a century after it was abolished by the godless Soviet authorities.

On January 14, the feast of the Circumcision of the Lord and St. Basil the Great, the Divine Liturgy was celebrated in the lower church of the Church of the Annunciation of the Most Holy Theotokos on Vasilievsky Island in St. Petersburg for the first time since 1923, reports the St. Petersburg Metropolis.

The service was celebrated on the right altar, which was consecrated in 1762 by St. Tikhon of Zadonsk. The renovated altar is to be consecrated in honor of the Holy Hierarch.

The rector, Archpriest Andrei Diakonov, recalled the 20th-century history of the church:

Let’s remember our history of the 20th century: 100 years ago, the heresy of Renovationism arose. In February 1923, the last Divine Liturgy was served here by the Holy Martyr Vasily Sokolsky, who was arrested and sent into exile, after which the church was seized by the Renovationists and then closed. In 1936, the persecutors of the faith turned the church into a factory; they set up a machine shop here. But the Russian Church withstood the persecution and was reborn. Now, almost a century later, we are again celebrating the Divine Eucharist in the lower church, communing of the Holy Mysteries of Christ. And we must always keep faith, be careful with it; a lot of blood has been shed and labors undertaken for it…

The Church of the Holy Trinity in the village of Ichalovo, Nizhny Novgorod Province, saw its first Divine Liturgy since 1937 in August of last year. 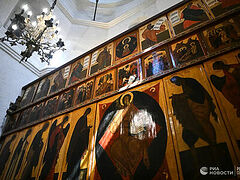 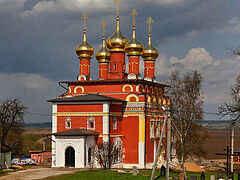 Ancient Russian monastery restored in Tula region
Enormous restoration work has been completed and is still underway at the Holy Transfiguration Monastery in Belev—one of Russia’s most ancient monasteries. 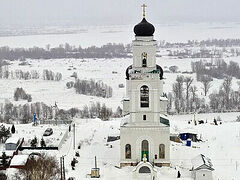 Liturgical life revived in Russian village church after several decades
The church was closed and looted by the godless authorities, saved from complete destruction only by its use as a granary in the Soviet period.
Comments
×