Patriarch Kirill: “Any desire to destroy Russia will mean the end of the world” His Holiness Patriarch Kirill celebrated the feast of Theophany in the Epiphany Cathedral in Moscow on Thursday, where he offered a rather stark warning in his homily: “Any desire to destroy Russia will mean the end of the world.”

Beginning his homily for the feast, the Russian primate emphasized that the meaning of the feast is that the grace of God appeared not just for the Jews, not just for the Apostles, but for all men, as St. Paul says (cf. Tit. 2:11),” reports Patriarchia.ru.

The words of God are immortal, he continued, as evidenced by the fact that the Orthodox faithful continue to celebrate the same feasts and offer the same prayers, year after year, century after century. “His preaching has no end; the power of grace will never be cut off,” Pat. Kirill preached.

When we celebrate the descent of the Holy Spirit on the Jordan during the Lord’s Baptism, we remember that the Lord is always with us through His grace, without which the world would have ceased to exist long ago, he continued.

And turning to current events, His Holiness continued:

Today we know that there are very big threats to the world, to our country, and to the entire human race, because some crazy people had the idea that a great Russian power with powerful weapons, populated by very strong people who from generation to generation have always been motivated to win, who have never surrendered to any enemy, who always emerged victorious—that they can either be defeated in the current conditions, or, as they say now, be reformatted, that is, impose certain “values” on them, which can’t be called values, so they would be like everyone else and obey those who have the power to control most of the world.

This desire to defeat Russia today has acquired, as we know, very dangerous forms. We pray to the Lord that He will bring those madmen to reason and help them understand that any desire to destroy Russia will mean the end of the world. But it’s not only this that we pray about, but that instead of such madness, the human race would find some new consciousness—the consciousness of our interdependence, the consciousness of the fragility of the world in which we all live, and the need to be all together and work for the sake of common values and goals that would be aimed primarily at preserving life and, I would add, as an Orthodox Christian, at preserving faith in God, without which all other values are either deformed or simply reformatted into their opposite and become not values, but factors contributing to the destruction of human life.

But despite the difficult times, the Patriarch maintains hope:

This is such an anxious time today. But we believe that the Lord will not leave the Russian land, will not leave our authorities, our Orthodox president, our army, that Russia will have enough forces, if necessary, to protect its land and its people. But God grant that it not come to such a showdown, that the Lord would reconcile everyone…

Thus, the Church prayers for world peace, but also “for the welfare of the holy churches of God, for the union of all,” and that “every untruth, every lie would be banished from human relations.” 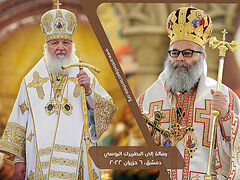 Pat. of Antioch to Pat. Kirill and Met. Onuphry: We weep with you 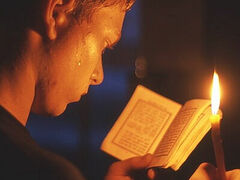 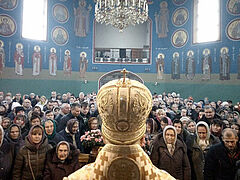 Andrew1/23/2023 2:13 pm
Alexander, you have a very valid point. I am not protestant though ironically, protestants would agree with you, because they would in fact say that those words are being used in scripture. However, orthodoxy normally looks at the context, which protestants don't normally do (and in this case you seem to follow their example). Christ called pharisees hypocrites in order to teach them and others of their mistakes, but He did not attack them physically, nor did He 'bless' or encourage His followers or anyone else to attack them physically (nor did, to my knowledge, the Fathers suggest that attacking physically someone they condemned verbally, would be the Christian thing to do). Indeed, Christ actually prayed for His enemies while on the cross and asked God to forgive them. I find Patriarch Kirill's words problematic because they don't appear to be said to 'teach' someone the same way Christ or the Fathers did. In fact they come in conjunction with his implicit blessing to bomb and kill people (for ex. he asked to stop bombardments until midnight after the Nativity feast - implicitly giving the blessing to carry on at 00:01am). The context is clearly a very different one and without taking it into account, there is a true rick (agreeing with you) that we could end up holding very protestant views.

Carol Meng1/23/2023 5:46 am
I am an Anglican and praying for a swift end to the current war in Ukraine and the reconciliation of the Ukrainian and Russian people who share the same faith, in Jesus Name, Amen.

Pfmd1/22/2023 8:01 pm
D. Reddington: Dmitry Medvedev is currently the Deputy Chairman of the Security Council of the Russian Federation. He is also the First Deputy Director of the Military Industrial Commission. These government positions are not “Unofficial” as you describe. Secondly, your myopic view of the “end of the world” rhetoric will not be attributable to the actions of the Russian Federations but to the actions of the Ango-Zionists and Neoconservatives currently in charge of American foreign policy in the White House. It is these Neoconservatives in the W.H. that will unleash the nuclear war that Russian officials are desperately trying to avoid and trying to convey their message to the Americans. Russia is too powerful to be defeated in any conventional war by the Americans or NATO. It is the Anglo-Zionist in America who will unleash the nuclear war and not Russia, when they come to the realization of their defeat in the proxy war in Ukraine. You are misinterpreting Russia’s position and statements from the misinformation you receive from western MSM.

Herman1/22/2023 6:21 pm
I see some serious problems in this sermon, the preaching of an ecumenistic social gospel disguised as Orthodoxy. "...but that instead of such madness, the human race would find some new consciousness—the consciousness of our interdependence, the consciousness of the fragility of the world in which we all live, and the need to be all together and work for the sake of common values and goals that would be aimed primarily at preserving life..." maybe a New World Order is what we need? Some new consciousness... We need nothing new, but only to follow the Traditions handed down from our Fathers. There are no "common values and goals" but only the salvation of our souls in the Church that should concern us. We are not concerned primarily with "preserving life" but only with the eternal life to come...

Alexander 1/22/2023 1:12 pm
@Andrew: It seems that you come from a protestant background? The Holy Fathers and Saints have even given orher names. Christ said: "HYPOCRITES, FOOLS, SNAKES, TOMBS,.... You should read Blessed Jerome..a very sarcastic Saint

Natasha1/21/2023 10:57 pm
1) To be precise, in his speech it is: "безумных людей", "безумцев". According to the NKJV Bible, this is translated: "foolish people", "fools". That is, such words are used not only by saints, but also by God. Just an inaccurate translation. 2) Russian military doctrine includes the use of nuclear weapons only in response to the use of nuclear weapons, and not otherwise. Only when the missile is already flying towards Russia, only then will Russia strike. So Russia will suffer anyway.

Andrew1/21/2023 8:22 pm
I can’t remember orthodox fathers or saints ever calling someone a ‘crazy’ person or a mad man. I thought Christians condemn the sin - not the sinner. Since when does a patriarch decide when the end of the world has come or who the Lord protects? I thought that God may well wish to make that decision for Himself.

Dionysius Redington1/21/2023 4:36 am
This week the Russian government has been using various well-known but unofficial representatives, e.g., D. Medvedev, to remind the world that Russia's official military doctrine includes the use of nuclear weapons after a conventional defeat. By coincidence, the Patriarch's sermon seems to make the same point at the same time. It is surprising that he calls nuclear war 'the end of the world' (which it would not be, from either the secular/scientific or the Orthodox Christian point of view) rather than 'the greatest mass murder in history' (which it would be, from any point of view). ---Dionysius Redington
×