Now when Jesus had heard that John was cast into prison, he departed into Galilee; and leaving Nazareth, he came and dwelt in Capernaum, which is upon the sea coast, in the borders of Zabulon and Nephthalim: That it might be fulfilled which was spoken by Esaias the prophet, saying, The land of Zabulon, and the land of Nephthalim, by the way of the sea, beyond Jordan, Galilee of the Gentiles; the people which sat in darkness saw great light; and to them which sat in the region and shadow of death light is sprung up. From that time Jesus began to preach, and to say, Repent: for the kingdom of heaven is at hand (Matt. 4:12­–17).

Today’s [yesterday’s] Gospel reading tells us about how Jesus Christ began His preaching. At first glance, we have before us a dry, unremarkable statement of facts from Gospel history. However, if we look more closely we can draw a very important lesson for ourselves.

It talks about the northern part of the Israeli kingdom called Galilee. On this territory lived the descendants of Zebulon and Nephilim. These were two of the twelve heads of the Jewish tribes. Galilee was an unusual region. It was fantastically fertile ground. Green hills with rich pastures and luxurious olive groves stretched out as far as the eye could see. Pagan peoples surrounded Galilee on all sides: To the west were Phoenicians, to the north, Syrians, and to the south, Samarians. Besides that, great trade routes passed through it from the ancient East. From Damascus a sea route ran through Galilee to Egypt. There was also an overland trade route that connected Africa with Asia. As a result, the populations of this region were mixed—not only Jews lived there, but pagans as well. None of these peoples looked down on their neighbors. They were open to each other, and had friendly, trade relations. It was thus only natural that the Galilean Jews were people with lively, inquisitive minds. They were not apt to reject outright what was new and unknown.

And that is why they were held in contempt by inhabitants of Judea, the southern parts of Palestine with its center in Jerusalem, the capital of the Israelite Kingdom. They held to orthodox Judaism, and at times distinguished themselves by their ultraconservative views. And this is no accident. Judea was an isolated region.

They did not have that liveliness of the northern regions. The population of Judea was homogenous, and few pagans could be found in it. It was in Judea that the Jerusalem temple was located—the religious heart of the Jews. There is where a strong party of Pharisees could be found—fanatical zealots of faith and piety.

That is why Christ began His preaching in Galilee and spent the larger part of His life there. There people listened to Him with great interest, and contemplated His words. Even if they argued with Him, their intonation was completely different from that of the Judeans. In Judea, for the orthodox Jews who were convinced of their exceptionalism, their infallibility, and righteousness before God and the Law, He was something foreign, alien, and evoked only sharp aversion, even to the point of crucifying Him on the cross.

What do all these ethnographic details mean to us? There is a saying among the clergy: “There’s nothing more difficult than converting an Orthodox priest to Orthodoxy.” In other words, there is nothing harder than explaining something to someone who is absolutely convinced that he himself is right. This is a simple but very useful thought. And it is an important one for someone who is trying to walk the path of faith.

For the most part, those who have just found the faith look at everything like a child, with wide-open eyes. It is characteristic of them to inquire, take an interest and soak in knowledge they might not have had before, and even to doubt their own experience. Everything is boiling inside them like lava. As long as a person has this heat, he continues to develop. He is open to people and to God. But alas, the fire can go out or lose its former strength. Enthusiasm and vigor disappear. We become inwardly content, plunge into a stupor, and close up. The heated mass cools down and takes on its congealed form. This is our formed concept of God, the world, people, and the foundational laws of spiritual life. Of course, they are not perfect. This is the problem. Who does not err? What is saddest of all is that we begin to accept this fruit of our lukewarmness as ultimate truth. We are convinced that we have reached the limit and now we know everything in the world. Only we know what leads to salvation and we are ready to teach it to others in the last detail, as if God Himself were speaking through us. Only we are right, and all the rest are wrong, or just don’t understand. You have to agree that dialogue becomes practically impossible with us in this case. This is the state of spiritual stoniness that aroused the inhabitants of Judea to crucify Christ. As opposed to the vibrant Galileans, they were not ready to listen to Him or hear Him. “What can some wandering carpenter from Nazareth tell us about God?” they said to themselves. “We already know everything there is to know.”

One of the saints of the Universal Orthodox Church, Blessed Augustine, wrote, “One day I found God, but from that time on I continue to seek Him again and again.” We too, dear friends, must learn in our spiritual lives to take regular accounts of our own souls. We must not be afraid to mistrust our spiritual experience, and not be content with what we’ve achieved. We have to continue to seek God every day, though we supposedly found Him one day. For this effort the Lord will again ignite that fire of grace, which is still smoldering under the thick stoniness of our souls. Let’s not doubt, and the great light will again shine in our hearts, as it did then in pagan Galilee. 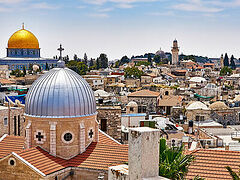 The Founding of Jerusalem
Part 3: Destruction of Sodom, and Founding of Jerusalem
Evgeny Abdullayev
The holy prophet and king David made the captured city the capital of his kingdom, and ruled in his new capital for thirty-three years, the period equal to the number of years of the earthly life of Christ, his Divine Descendant. 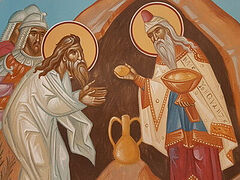 The Founding of Jerusalem
Part 2: Melchisedek, King of Salem

The Founding of Jerusalem
Part 2: Melchizedek, King of Salem
Evgeny Abdullayev
A king and a priest Melchizedek is undoubtedly one of the most mysterious figures in all of the Holy Scripture. 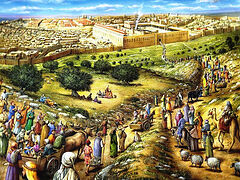 The Founding of Jerusalem
Part 1: The Canaanites, War of Kings, and Lot’s Rescue by Abraham

The Founding of Jerusalem
Part 1: The Canaanites, War of Kings, and Lot’s Rescue by Abraham
Evgeny Abdullayev
The Holy Land was known under different names at various times, and no wonder it’s easy to get confused: the Land of Canaan, Judea, Palestine, the LORD’S land, the Land of Israel…
Comments
×