His Beatitude Patriarch John of Antioch and All the East and a visiting Russian Church delegation consecrated two newly rebuilt churches in Syria on Sunday.

The first was the Church of the Great Martyr George in Arbin, Rif Dimashq Governorate. The Russian Church delegation was headed by His Eminence Metropolitan Anthony of Volokolamsk, head of the ROC’s Department for External Church Relations, the DECR reports.

The church was seriously damaged in the fighting near the Syrian capital and was restored at the expense of Russia and the Russian Orthodox Church.

The church was consecrated on Sunday before the Divine Liturgy, celebrated by Pat. John, Met. Anthony, and several other Antiochian hierarchs, together with Antiochian and Russian clerics. The services were celebrated in Arabic and Church Slavonic. In his primatial address, Pat. John thanked God for the restoration of the church, allowing the locals to find fulfillment of their spiritual needs.

“Today, for the glory of God, we are once again standing in this church, rebuilt by joint efforts,” he said, giving thanks to the attending representatives of the Russian Church and state.

In memory of the concelebration, Pat. John presented Met. Anthony with an icon of the Most Holy Theotokos.

“We have Paschal joy in our hearts today,” Met. Anthony exclaimed.

The participants then enjoyed a concert by the parish children’s choir and the Orthodox Scouts youth orchestra.

The same day, Pat. John, Met. Anthony, and the Antiochian and Russian delegations also visited and consecrated the Church of the Dormition in nearby Al-Zabadani, which was also damaged and restored with the help of the Russian Church and state. According to the Antiochian primate, the restoration of the church was a factor helping people return to their war-torn but recovering hometown, “thanks to the enormous efforts of the Russian state and the Russian Orthodox Church.”

Following the consecration, the participants again enjoyed a musical performance by the children of the parish. 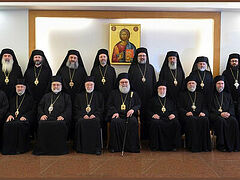 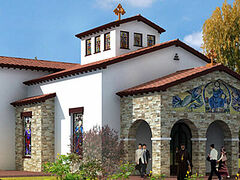 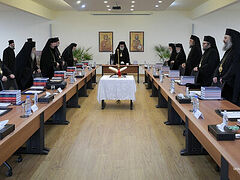 Antiochian Synod: We must return to principle of consensus and unanimity of Orthodox Churches

Antiochian Synod: We must return to principle of consensus and unanimity of Orthodox Churches
The Holy Synod of the Patriarchate of Antioch gathered in Balamand yesterday under the chairmanship of His Beatitude Patriarch John X.
Comments
×