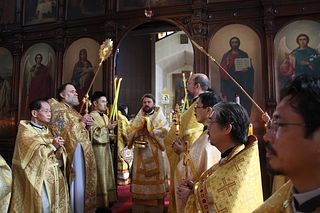 On 10 October 2010, the 40th anniversary of canonization of St. Nicholas of Japan, Equal-to-the-Apostles, and the granting of the autonomous status to the Orthodox Church of Japan by the Russian Orthodox Church were celebrated at the Church of the Intercession in Osaka, Japan.

His Eminence Daniel, Archbishop of Tokyo and Metropolitan of All Japan, officiated at the celebration. Taking part in the celebration, with the blessing of His Holiness Patriarch Kirill of Moscow and All Russia, was a delegation of the Russian Orthodox Church led by Metropolitan Hilarion of Volokolamsk, chairman of the Moscow Patriarchate’s Department for External Church Relations (DECR). The delegation consisted of Archbishop Theognost of Sergiev Posad, abbot of the Lavra of the Holy Trinity and St. Sergius; the DECR deputy chairman archpriest Nikolai Balashov; DECR staff members hierodeacon Ioann (Kopeikin), L. Sevastianov and S. Petrovsky; and clerics and laymen of the Russian Orthodox Church.

That same day Metropolitan Daniel gave dinner in honour of the DECR chairman and members of the Russian Orthodox Church delegation.