A monk from a samurai family

Hierodeacon Nikolai (Ono) comes from an old family of priests of the Japanese Orthodox Church. His great-great grandfather’s name—Priest John Ono—is often mentioned in the diaries of St1. Nicholas of Japan. We talk with Fr. Nikolai about his family and Orthodox churches of Japan and Russia. 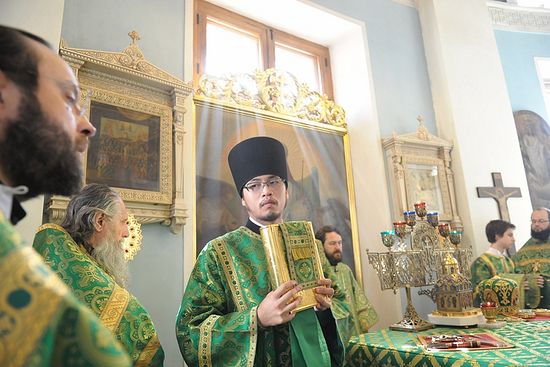 Fr. Nikolai, please tell us about your family.

On my father’s side, my family was Samurai. They lived in the city of Sendai in northeast Japan. My great-great grandfather, Ono Syogoro Sigenobu, was the last Samurai in our family. He was baptized with the name of John by St. Nicholas of Japan in 1871 and became one of the first Christians in the Japanese land. Later, John Ono was ordained a priest, was engaged in missionary work, and was the dean of the church in the city of Osaka. My great grandfather and grandfather likewise received baptism and were parishioners of the church in Kyoto.

My father is also called John. Since there are no Orthodox educational institutions with government licensing, he studied in the theological department of a Protestant university in Kyoto, and after graduating he entered the Orthodox Ecclesiastical Seminary in Tokyo. After graduating from the seminary my father was ordained a deacon, then in 1990 to the rank of priest, and served in the Cathedral of the Resurrection of Christ in Tokyo, which is known as “Nikolai-do.” After that he was sent to the Church of the Annunciation in Kyoto (the cathedral of the Western Japan Eparchy), where he served as dean for about 20 years. After Kyoto, my father was once again summoned to serve in the Tokyo cathedral, where he carries out his obedience to this day.

Have any old Orthodox holy items been preserved in your family?

We have a photograph of St. Nicholas of Japan with his autograph, which the holy bishop himself gave to my great-great grandfather as a present.

Tell us about your life in Tokyo and Kyoto.

I was born in Tokyo in 1989, and lived on the property of the Tokyo Cathedral of the Resurrection of Christ. The residence of the Primate of the Japanese Orthodox Church is located in that same place. I often had occasion to see the reposed Metropolitan Theodosius (Nagasima), who would sometimes treat me to sweets. 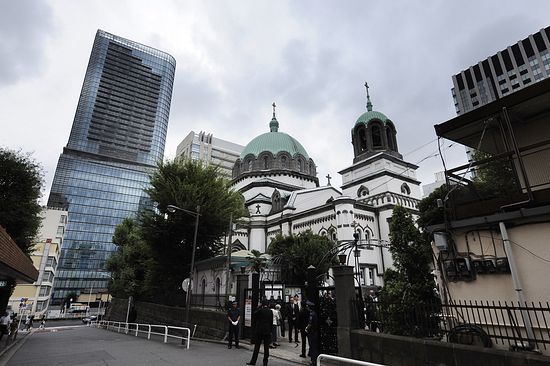 When I was 3 years old, my whole family moved to Kyoto, as they assigned my father to be dean of the cathedral of this historical capital of Japan.

After we moved we lived there permanently, and I went to school and university there. It was only in the fall of 2011 that I moved again to Tokyo, where my father was assigned in 2010.

The Orthodox church in Kyoto is one of the oldest in Japan. Could you tell us about the history of this parish and contemporary parish life?

The majority of the parishioners of the Annunciation Church in Kyoto are third-, fourth-, or even fifth-generation Orthodox. The church choir is also made up of parishioners. They have choir rehearsals once a month. We have a parish council and sisterhood, and we publish a newspaper.

The parish began with lectures about Orthodoxy held in one of the buildings in the center of the city. At first these lectures were temporarily led by my great-great grandfather, Fr. John Ono, then by Hieromonk Sergius (Stragorodsky), the future Patriarch of Moscow and all Russia. Then the Church of the Annunciation was built—in a different place but likewise in the city center—and was consecrated in 1903 by St. Nicholas of Japan. In 1986 the Kyoto city government recognized the church as part of the city’s cultural heritage.

Russian parishioners also attend the church, and foreign students from other Orthodox countries. Sometimes non-Orthodox Japanese also come, including young people. Most of them are simply interested in the unusual architecture in the center of Japan’s historical center, but some of them begin to come to church regularly and are baptized. Approximately once a year students from a Protestant university come on an excursion.

Do you remember His Holiness Patriarch Alexy II’s visit to Kyoto?

At that time, in May of 2000, when I was 10 years old, His Holiness Alexy II, Patriarch of Moscow and All Russia, accompanied by the Chairman of DECR2, Metropolitan Kirill—now His Holiness the Patriarch—made the first Patriarchal visit in the history of the Japanese Orthodox Church. He headed the liturgy and enthronement of Daniel, Archbishop of Tokyo and Metropolitan of All Japan, in the “Nikolai-do” Cathedral in Tokyo. 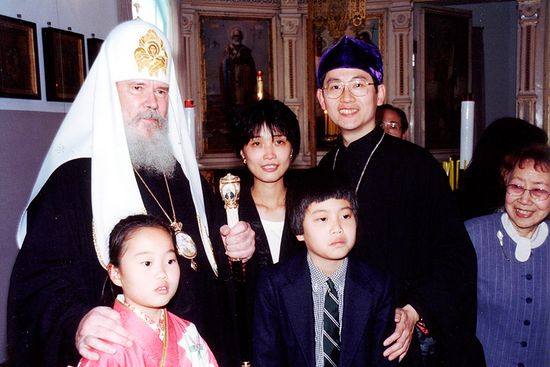 His Holiness Patriarch Alexy in the Cathedral in Kyoto in 2000, with Fr. John Ono, Matushka Sarah Ono and their children—Alexy (in monasticism Nikolai) and Lyubov (Charity).

His Holiness the Patriarch also visited the Annunciation Cathedral in Kyoto, where my father was serving then. The (now) reposed Patriarch served a moleben, took a tour of the church and its revered sacred object—an altar Gospel given by St. John of Kronstadt with the inscription of St. Nicholas of Japan—and talked with the parishioners. The church was full of priests and parishioners—not only from our parish, but also from other churches in the Western Japan Eparchy.

Do Japanese young people know about Orthodoxy? Are the fundamentals of the Christian Faith taught within the scope of academic subjects in schools and universities?

I graduated from the law department at Kyoto State University. It seems to me that—at least at the baccalaureate level—they don’t offer subjects in Christian theology. There is only “History of Western Philosophy,” and, within the framework of this subject it talks mainly about Catholic or Protestant thinkers. Young Japanese know that Catholicism and Protestantism exist; a few know that Orthodoxy also exists, or—in literal translation from the Japanese—“the Eastern Orthodox Church.” Orthodoxy is written about in the high school world history textbook, but this is a very short description, and the narration is written from the point of view of the West.

Unfortunately, few people know St. Nicholas of Japan. But the Cathedral of the Resurrection of Christ in Tokyo is known to all as "Nikolai-do," that is, Nicholas's Church. The old church in Hakokate is also quite a famous landmark.

Have you been able to see many of the Orthodox churches in Japan?

I lived in the churches of Tokyo and Kyoto. We used to visit the churches in Osaka and Kobe, since they were close to our church in Kyoto. I have been to the church in Sendai three times: once, I accompanied a delegation headed by His Holiness Patriarch Kirill, who visitied Japan in 2012 on the occasion of the 100th anniversary of the repose of St. Nicholas of Japan, Equal-to-the-Apostles. 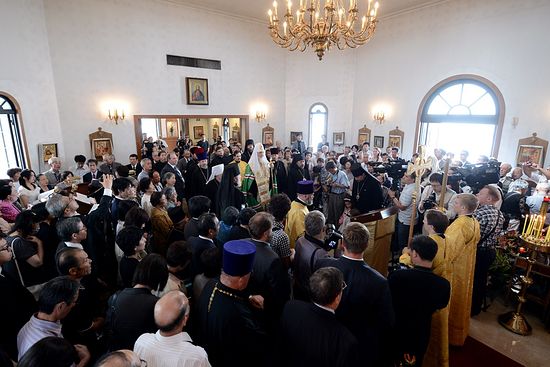 The visit of His Holiness Patriarch Kirill to the Cathedral Church of Sendai Eparchy, September 15, 2012.

It was the second Patriarchal visit in the history of the Japanese Church.

How long have you been in Russia?

I've been living in Moscow for two years now. I'm in the second year of the Master's program of SS. Cyril and Methodius General Church Postgraduate and Doctoral Studies, created in 2009 by the decision of the Holy Synod and on the initative of His Holiness Patriarch Kirill. The rector of this school is Metr. Hilarion of Volokolamsk, Chairman of the Department of External Church Relations of the Moscow Patriarchate. The program we have is substantial and intensive. Special attention is paid in our courses to the study of foreign languages, in particular, English. The professors of General Church Postgraduate Studies work at the Department of External Church Relations. The subject Inter-Orthodox Relations especially interests me. The professors of this discipline are people working in DECR, who are acquainted with the most pressing issues in this area.

Besides the study of the required subjects, I am writing my Master’s thesis on Vladimir Lossky’s book Outline of the Mystical Theology of the Eastern Church.” In my work I wanted to show to what extent this book has interest and is topical for the Orthodox faithful of Japan. 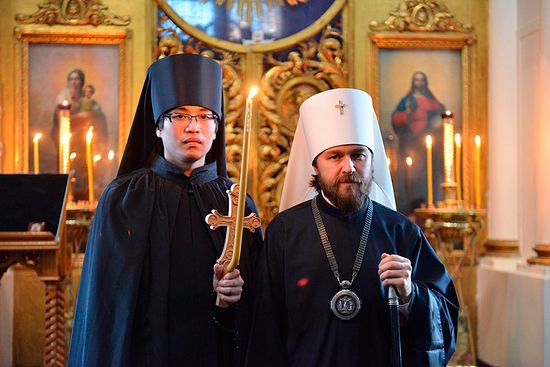 Metropolitan Hilarion of Volokalamsk and Fr. Nikolai (Ono) after his tonsure.

Where do you serve?

Being a hierodeacon, I serve in the Moscow church named after the icon of the Mother of God “Joy of All Who Sorrow” on (Great) Ordynka (Street).3 After my arrival in Russia I became the subdeacon of the dean of this church, Vladyka Hilarion. And there, on April 30, 2013, I was tonsured a monk by His Eminence Metropolitan Hilarion, with the blessing of His Holiness Patriarch Kirill; and on May 5, 2013, on the day of Holy Pascha, I was also ordained by him to the rank of hierodeacon. The priests, helpers, and parishioners of this church are good, kind people. The Synodal Choir sings splendidly. For me, this church in honor of the icon of the Mother of God is beloved and dear, and holds a most important place in my heart.

I also like the Novospassky Stauropegial4 Monastery, whose vicar is Vladyka Savva. I live in this monastery. There—as in the church on Ordynka—they received me very well. There they sing beautifully. I like the frescoes in the monastery churches very much.

I have been in many other monasteries and churches in Moscow; I have visited St. Petersburg, Diveyevo, Rostov-on-the-Don, and other Russian cities. I especially liked St. Petersburg and Diveyevo.

1. The original Russian has sviatitel’, which is used as the title of a saint-hierarch.

3. Great Ordynka Street—one of the main streets across the Moscow River from the Kremlin, named after the Great Horde. In addition to the Church of the Mother of God “Joy of All Who Sorrow,” the Martha-Mary Convent of Mercy, founded by New Martyr Grand Duchess Elizabeth, is there, open and working, and the Tretyakov Gallery is nearby.—Trans.

4. A stauropegial monastery or church is independent of the local bishop; it is directly under the Patriarch or Synod. Russian Patriarch visits Japan
Patriarch Kirill of the Russian Orthodox Church who is on a visit to Japan has visited the Sendai Orthodox diocese which was badly hit by the earthquake and tsunami in March last year. Metropolitan of Japan Daniel: “Divine love must reign in the heart of man”
Metropolitan Daniel of Tokyo and All Japan
When I was young, I enjoyed intellectual activities. But now, having the main part of my life behind me, I have come to the conclusion that knowledge is far from everything. The most important thing is the spiritual state of our souls and hearts, which leads to salvation.
Comments

Bertski12/15/2017 8:24 am
It's good to see Japanese join the church. Which if it teaches the truths that being unity and harmony, so much the better as it's living the faith as much as we can that matters. Some don't have full ability to live life much less the faith.
But it's good to see.
It's also good to see that typical of Orthodox, the church stood despite international conflict. Where that's the world, not the faithful. Only thing, others who love I'm the world want to drag the faithful into discord, which is bad.
How Bless!
×