Archbishop Elisei of Sourozh consecrates church of St. Nicholas the Wonderworker in Oxford 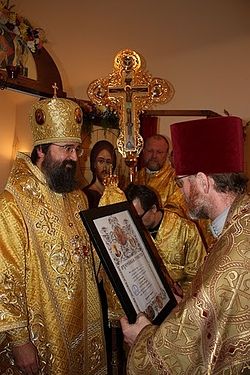 On 9 October 2010, Archbishop Elisei of Sourozh consecrated a new church in Oxford dedicated to St. Nicholas the Wonderworker. Twenty priests, including clergy of the diocese of Sourozh, representatives of the Local Orthodox Churches, and the Russian Orthodox Church Abroad from Great Britain and Ireland took part in the service.

Oxford Lord Mayor John Goddard and his spouse, representatives of the Anglican and the Roman Catholic Church attended the service, press service of the Diocese of Sourozh reports.

After the service, Archbishop Yelisei and the assembled clergy celebrated the first Divine Liturgy at St. Nicholas’ Church.

The Archbishop made a present of icons to the church and awarded its rector, Revd. Stephen Platt, with the Hierarchal Certificate of Merit. The San Francisco diocese of the Russian Church Abroad made a present of an icon with a particle of relics of St. John of San Francisco. Representatives of the Moscow St. Tikhon’s Orthodox University presented an icon of St. Nicholas to the church.

An Interview With Fr. John Musther of Cumbria
“Christ Won the Battle and Made my Heart Orthodox!”
Dmitry Lapa
Father John Musther, an Orthodox Englishman, serves in the Orthodox missionary parish of Sts. Bega, Mungo and Herbert in Keswick, Cumbria, North West England. His community, which is under the jurisdiction of the Ecumenical Patriarchate, is part of the ancient tradition of the Orthodox Church. The congregation is a living witness of the truth of Holy Orthodoxy to the people living nearby. The Inspiring Story of Fr. Stephen Hatherley - English Orthodox Pioneer
Fr. Jonathan Hemmings
Father Stephen Georgeson Hatherley was such a man with a mission. He was an Englishman who converted to Orthodoxy in the late 19th century when it was difficult to do so. Such a move invited scorn and persecution from the prevailing intolerance of the establishment. An interview with priest Andrew Phillips
Archpriest Andrew Phillips
The time of the martyrs has gone, for the moment, now is the time of the confessors. We need the common witness of both St John of Shanghai and St Luke of Simferopol, of St Jonah of Manchuria and St Sebastian of Karaganda, of Abbess Rufina (of Harbin) and the Elder John (Krestiankin), and all the saints and righteous of both sides. The saints unite us; people of this world disunite us. In the face of the threats of the contemporary, post-Christian world, we Orthodox Christians must stand together, sturdy spiritual warriors.
×