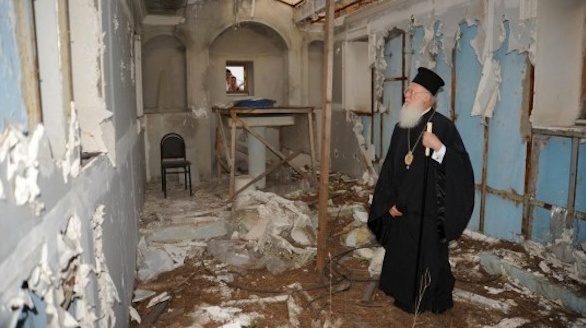 An imprisonment sentence was imposed by the Turkish Court of Princes’ Island upon the Metropolitan of Moschonissia, Apostolos Daniilidis and a member of the Princes’ Island community, Vassilis Poridis, on the charge of illegal construction of a church in Chalki, according to the Turkish newspaper Sabah.
The sentence, according to Sabah, is on a five year suspension. It is also noted that the Metropolitan of Moschonissia will proceed to refute the article, since it creates a false impression regarding the construction of the church, as the church has existed since 1832. It is the Church of Transfiguration, which about three years ago was demolished by the Turkish authorities, when the Ecumenical Patriarchate proceeded to make repair works. However, the Forest authority of the Princes’ Islands, declaring the land on which the Church was built a “forest area,” on the 13th of November 2007, ordered the demolition of the building; the contractors hired by the Patriarchate, who had undertaken the restoration works of the Church, were prosecuted.

The governor of the Princes’ Islands, Mevlut Kurban, however, considered that the Church was property of the Patriarchate and denounced the previous decision which characterized the land as a “forest area”.
With regards to the restoration work, the Church authorities in Chalki have already received authorization by the Council of Monuments and Sites; authorization by the Municipality, a standard procedure, is pending.

Religion in Turkey. Erasing the Christian past

Religion in Turkey. Erasing the Christian past
On July 5th the mufti of Trabzon gathered with other citizens for the first Friday prayers of the holy fasting month of Ramadan, not at a mosque but at an ancient Byzantine church.

Turkey gives up seized religious property
In a significant move that appears to meet European Union demands, Turkish authorities have announced that they intend to return properties confiscated from religious minorities since 1936, and pay compensation for seized assets that have since been sold to third parties.
×