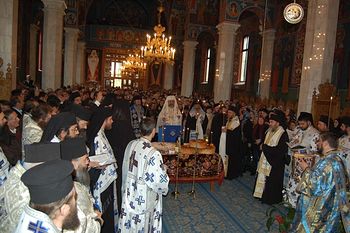 On 16 October 2010, His Beatitude Patriarch Daniel celebrated at Sihastria Monastery the remembrance service for hieroschimonk Paisie Olaru, assisted by a group of 8 hierarchs, deacons and priests. Hundreds of faithful attended the event, so that the church monastery was not large enough for all the faithful to go in.

Lucian Ducan, correspondent of Trnitas Radio station gave more information on the events at Sihastria Monastery: “The events occasioned by the commemoration of rev. Paisie Olaru began this morning with the Divine Liturgy celebrated in the big church of Sihastria Monastery by a group of six hierarchs: His Eminence Vassilios, Metropolitan of Elassona, His Eminence Teofan, Metropolitan of Moldova and Bucovina, His Eminence Andrei, Archbishop of Alba Iulia, His Eminence Casian, Archbishop of Lower Danube, His Grace Ambrozie, Bishop of Giurgiu, and His Grace Emilian Lovisteanul, Assistant Bishop to the Archdiocese of Ramnic.

The Primate of the Romanian Orthodox Church evoked in the end of the remembrance service the personality of the great father confessor Paisie Olaru.

“After the Divine Liturgy there followed the remembrance service that His Beatitude Patriarch celebrated together with the hierarchs mentioned above and His Eminence Calinic, Archbishop of Arges and Muscel and His Grace Ioachim Bacauanul, Assistant Bishop to the Archdiocese of Roman and Bacau. To end with the religious service, His Beatitude Patriarch Daniel evoked the personality of hieroschimonk Paisie Olaru, and then they all went to the grave of the well-known father confessor where a trisaghion was celebrated”, said Lucian Ducan.

In the speech delivered at the end of the service, the Patriarch of Romania showed that Father Paisie had a series of virtues by which he would remain always alive in the memory of those who knew him: “The bright image of father Paisie Olaru will be always alive in our memory, as three lights linked together, namely as a humble praying person, as a wise adviser and as a merciful father.

Rev. Paisie Olaru, who was born in Botosani region and spent some time with father Cleopa at Cozancea Monastery, was a very humble man all his life. He was a humble prayerful man because whenever he prayed or served was never interested how he looked to the people, but only how he could stand straight and right in front of God”.

Then, a symposium dedicated to the anniversary of 20 years since the passing away of the great father confessor Paisie Olaru took place at the semi-basement of the big church of Sihastria Monastery, in the presence of His Beatitude Patriarch Daniel. The Symposium began at 11.30 and ended at 15.30 hours, informs Constantin Ciofu, correspondent of “Lumina” newspaper.

Father Paisie Olaru passed away on 18 October 1990. He was buried in the cemetery of Sihastria Monastery, near his grave having been the grave of another great father confessor of this monastic community, archimandrite Cleopa Ilie. Counsels of Elder Justin (Pârvu); †June 16, 2013
Archimandrite Justin (Parvu)
On June 16, 2013, at 10:40 p.m., after several weeks of suffering in terrible pain, which became particularly acute during his final hours of life, Archimandrite Justin (P&#226;rvu) departed this temporary life to the habitations of heaven, to the holy martyrs and confessors he so loved, and with whom he so longed to be united.

An Interview with Elder Joel of Sihastria (1908–1986)
Archimandrite Ioanichie (Balan)
Тhe fathers from Sihastria Monastery and the faithful from the region remember with great reverence the name of Protosinghel Joel (Gheorghiu). He was a skilled spiritual father, meek and merciful, with a heart pure before God and man. He was also a father of absolute obedience, humility, and prayer. Few from the community loved the services of the Church, the good order [of the monastic life] and silence as much as Fr. Joel did. However, in order to attain this spiritual measure, one needs over fifty years of ascetic labor, obedience, patience, and renunciation of all that is transitory. Otherwise, one is unable to acquire a peaceful conscience and the hope of salvation.
×