In Kazakhstan, Orthodox services will be conducted in the Kazakh language 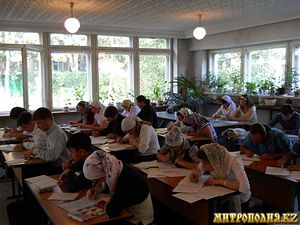 In Orthodox Churches of Kazakhstan, it is likely that services will be conducted in two different languages, reports Interfax – Religion.

"At present, the issue of using the Kazakh language in Orthodox churches of Kazakhstan is being resolved," reports Metropolitan Alexander of Astana and Kazakhstan during a "direct line" with readers of the newspaper, Evening Alma Ata.

He noted that at the recently opened theological seminary in Alma Ata, the coursework for future pastors includes mandatory study of the Kazakh language, and the main liturgical texts are now being translated into that language.

"In the not so distant future, in those churches where Kazakh is the native language of members of the congregation, it is quite possible that Divine services will be served in two languages—Church Slavonic and literary Kazakh," said the Metropolitan.

In his words, spiritual literature will be published in the Kazakh language; an official website will be opened, and sermons will be preached in Kazakh.

Vladyka reminded his listeners that last Pascha's Patriarchal epistle was published and read in two languages—Russian and Kazakh.