On the Feast of St. Edmund, King and Martyr 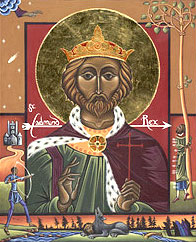 In the third century a great Church Father, St Cyprian of Carthage, whose icon is on the wall to the left of me, wrote that: 'The blood of the martyrs is the seed of the Church'. He knew this from his own experience, for he had witnessed the ends of thousands of martyrs for Christ, indeed he himself was to be martyred. His words echo the fact that the Church was founded on the blood of Christ, on His Cross, on His sacrifice.

Indeed, spiritual progress can only be made through the Cross, through sacrifice. Wherever there is no sacrifice, there the Church becomes a mere institution, a ritual, an empty form. But where there is sacrifice, martyrdom, the Cross, there is spiritual life. We can see this very clearly in the Old Testament. By the time of Christ, for example, the religion of the Hebrews had largely become a nit-picking, hair-splitting ritualistic, formal religion known as pharasaism. Moreover, throughout history some Christians have frequently fallen back into this type of Old Testament religion. However, real religion and all spiritual progress, which is the purpose of religion, is always based not on institutionalised religion, which is spiritual decadence, but on sacrifice, on the Cross, on the martyrs.

Thus, in order to convert the huge Roman Empire to Christianity, it took three centuries of martyrs in all the countries of that Empire. Martyrdom was the precondition of that conversion. Without it conversion could never have taken place.

However, countries which only came later to the Orthodox Faith often only suffered few martyrdoms, at least at first. For example between the tenth and twelfth centuries the Conversion of Russia, with only a few exceptions, took place peacefully. Russia began her sufferings only after that golden age, with the invasion and destruction of the Mongols. In the same way the Conversion of England to Orthodox Christianity, which began only at the end of the sixth century, passed off mainly in peace for some two hundred years. Then, however, for over two hundred years, England was plagued by the invasions of pagans, the Vikings. Furthermore, it was this region of England, the ancient kingdom of East Anglia which suffered the most. Being in the East, facing the Viking homeland of the Danes, the east coast suffered more than anywhere else.

At that time East Anglia was still an independent Kingdom in the English confederation. It was ruled by a young King, still unmarried, in his late twenties. He was called Edmund, which in Old English means 'noble protection' And indeed he lived up to his name, having a reputation for compassion and protection, afforded to the weak, the widow and the orphan. His greatest challenge was the arrival of the ravaging Danes. We should note that the attacks and ravages of the Danish Vikings were not those of another race. The Danes and the English were of the same race, so much so that they could more or less understand their kindred languages. There was only one essential difference between the Danish Vikings and the English - the former were heathen, the latter were Christian.

King Edmund began the resistance to the Viking attacks which had destroyed churches and monasteries and homes and villages, up and down the land. Fighting side by side with the great Christian King Alfred, who was later to save England, Edmund did his best, but was finally overwhelmed by the huge numbers of Danes. At Hoxne in the north of Suffolk, the King was captured. Here the Danes made him an offer, to become a puppet-king, a kind of quisling, under their heathen tyranny, or die. Edmund chose not in any way to renounce the Faith, choosing death. An eyewitness report from that time, relates how he was scourged and bound, tied to an oak-tree and then how the Danes fired arrows at him as for target practice. All the time the name of the Saviour did not leave his lips. Finally, suffering immensely from his many wounds, King Edmund was beheaded. It was the year 869.

One of the best-known stories of this region tells how the Danes left, with Edmund's corpse unburied and his head thrown away into deep brambles. When men came searching, finding the body but not the head, they were called by a wolf, probably Edmund's own hunting-dog or wolfhound, to the place where the head lay. It is this scene which is portrayed on the icon in the middle of the church.

They took the corpse and head, set them in a hastily-built hut-chapel and immediately miracles began. A light was seen over the tomb, the blind and the sick were healed. Miraculously the head became joined to the body, with only a red scar marking the place of the cruel cut between torso and head. Local people came as pilgrims to venerate Edmund's relics, which remained intact and incorrupt.

Thirty years passed, the children of the Vikings had settled in England and they had been baptised. Edmund's body was moved from the small village of Hoxne to the central town of Suffolk, a town which soon became known as St Edmund's Town - Bury St Edmunds. The children of the Danes and the surviving Danes themselves, now grown old, came to venerate Edmund and minted coins in honour of 'St Edmund'. Soon, he was known as the Patron Saint of all East Anglia. His symbol of three crowns, representing his kingship, his martyrdom and his virginity, can still be seen on many emblems, crests and flags all over East Anglia to this day.

A little later in the tenth century, the King of England of that time, Athelstan, built a great road from the main port of East Anglia, at St Felix's Dunwich, to Bury St Edmunds. This pilgrims' way was known as 'the King's Road' and was the equivalent of the modern A14. Veneration of St Edmund spread all over England and some 60 churches were dedicated to his memory and he was declared the first Patron Saint of England. On hearing his name, the cry would go up, 'For England and for Freedom'.

Strangely, however, the last recorded miracle over St Edmund's relics appears to have been in the middle of the eleventh century. As the church at Bury St Edmunds became richer and richer, more and more powerful and more and more institutional and decadent, so spiritual life seemed to wane in it. By the thirteenth century, when the Abbey at Bury St Edmunds owned half of Suffolk, its church had become the third tallest in all Christendom, outranked only by St Sophia's in Constantinople and St Peter's in Rome. It was then at the beginning of the thirteenth century that St Edmund's relics were stolen by French knights and taken to Toulouse in France. Although the abbey continued to be rich and powerful, it finally fell completely and was destroyed in the sixteenth century. We all know today that all that survives of it are some crumbling blocks of masonry in the Abbey Gardens.

However, in the nineteenth century, the oak-tree to which by tradition Edmund had been tied nearly a thousand years before, fell at Hoxne. When it was sawn up, a Danish arrowhead was found. Today it can be seen in the museum in Bury St Edmunds, a relic of all those arrows which had been fired at St Edmund all those years ago. Then at the beginning of the twentieth century, most of the relics of St Edmund were returned to England from France. They lie safe, but concealed, in a Catholic church at Arundel in Sussex. A tiny fragment of them was brought to the Catholic church in Bury St Edmunds in the 1960's. However, there is an ancient prophecy that all the relics of the saint will be returned to Bury St Edmunds before the end of the world. However, for that to happen, there must first be people here to venerate them in an appropriate manner.

What today can we learn from St Edmund's sacrifice?

Firstly, that no sacrifice is ever wasted. Sacrifice always inspires and triumphs, even if the inspiration and the victory comes only after, or at the cost of, our earthly lives.

Secondly, we can learn that just as St Edmund freed the heathen from their delusion through his self-sacrifice, we too today can free ourselves from our own personal heathendom, our sin, through our own self-sacrifice.

Thirdly and finally, we can learn that by confessing our faith in St Edmund, we confess our faith in something other than the values of this world, institutional riches and power, we confess eternal values and that it is only those values which will save us, as they of old saved our forbears and all England.

Holy Martyr Edmund, pray to God for us! Holy Martyr Nectan of Hartland
Commemorated June 17/30
Dmitry Lapa
As a young man, Nectan decided to become a monk and serve God for the rest of his life, imitating the Holy Fathers of Egypt. So together with a group of his pious relatives, Nectan boarded a boat, promising to lead an ascetic life at the site where his boat would land. Who was St. Edmund?
Commemorated November 20/December 3
Edmund the Martyr was crowned King of East Anglia in 855 or 856 and was venerated as a Martyr Saint soon after his death at the hands of Danish Vikings on 20th November 869. This date remains St Edmund’s Feast Day today.

Roseann Varner12/3/2020 5:02 pm
Beautifully written and stunning Iconography of beloved St. Edmund. Many years to my husband whose namesday - Edmund -is celebrated today!He was given the Icon of St Edmund shown above (Who was St Edmund?) by our Priest when Edmund was baptized as an Orthodox Christian at Sts Peter & Paul in Mount Union PA.