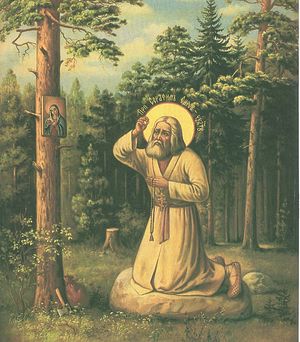 St. Seraphim of Sarov prayed on a rock for a thousand days.
In the Orthodox Church saints emerge. No central office in an institution checks, qualifies and certifies a person as a saint. On one reading, we are all saints. The word simply means "set apart" and that's how Christians have understood themselves since ancient times: set apart for service to God in, but not of, the world. "He who truly loves God considers himself a wanderer and newcomer on earth, for in him is a striving towards God in soul and mind, which contemplates God alone." Certain people emerge as standouts in the church. Their chief characteristic is the search to live in the presence of God with every fiber of their being, and to recognize God's presence in creation and humanity.

Such a saint was Seraphim of Sarov, author of the saying quoted above. Seraphim was born Prohor Moshnin in 1759 in Kursk, Russia, to a merchant family, and he showed strong spiritual sensitivity from childhood. After recovering from a childhood illness, he entered the monastery at Sarov in 1778. In 1786 he took final vows to become a monk and received the name Seraphim, which means "fire" or "burning," in part because of his zeal at prayer. After 1793, the year he was ordained a priest of the church, he moved to a forest hermitage five miles north of the monastery, and began to see people as a starets, Russian for "elder," meaning a spiritual director. People flocked to him over the last decades of his life. Early in this period he sustained a severe beating at the hands of robbers, which left him with a hunchback for the rest of his life. At the trial for these men, who had been captured, Seraphim offered them words of forgiveness.

The animals in the forest especially loved Seraphim, and he fed them even as legend says that they fed him, too. Among his animal friends was a bear often depicted with him on one of the icons that commemorate his life. Our annual animal blessing at St Anthony of the Desert Mission this Saturday is in honor of St Seraphim.

St. Seraphim says about faith: "Faith, according to the teachings of St. Antioch, is the beginning of our union with God: the true believers are the stone of the church of God, prepared for the edifice of God the Father, which is raised up to the heights by the power of Jesus Christ, that is, by the Cross and help of the grace of the Holy Spirit. "Faith without works is dead" (James 2:26). The works of faith (fruits of the Spirit) are love, peace, longsuffering, mercy, humility and bearing one's cross. True faith cannot remain without works. One who truly believes will also surely perform good works."

Central to Seraphim's approach to the faith was the acquisition of the Holy Spirit, which he called the "true goal of the Christian life." He gave his life over to this acquisition through prayer and discipline and he urged the same practice on his visitors. His most remembered saying is, "Acquire a peaceful spirit, and thousands around you will be saved." Prayer, ascetic discipline and acts of mercy achieve this, over a long time. Seraphim said, "Only deeds performed for Christ give us the fruits of the Holy Spirit."

The Orthodox Church in Russia recognized Seraphim as a Saint in 1903, the 70th year after his death. Orthodox churches around the world held a centennial celebration of his recognition as saint in 2003. People continue to come to pray at the grave of St Seraphim and to experience his presence in their lives in many ways for counsel and healing. St. Seraphim of Sarov. A Sermon by St. John Maximovitch
St. John (Maximovich) of Shanghai and San Francisco
It was the same during his earthly life. Cities were being destroyed, kingdoms were being established, Napoleon advanced upon Russia with twelve nations and then left in disgrace, Moscow burned and was again raised from the ashes, Decembrists organized revolts and were then sentenced; but was as if these events did not touch St. Seraphim.
Comments