St. Seraphim of Sarov. A Sermon by St. John Maximovitch 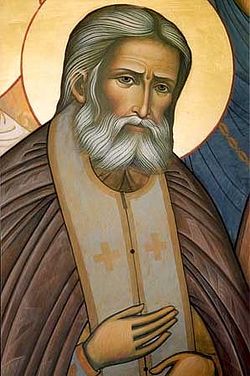 “They will sing Pascha in the summer,” was once said in Sarov. Seventy years passed from the death of the man about whom these words were pronounced, and on July 19, 1903, all of Rus’ resounded with hymns of praise, glorifying God and His saint. Truly, all of Rus’ exalted then as on the Day of Holy Pascha—even more so.

Later terrible days came for Russia, but the memory of St. Seraphim neither died nor weakened. Russian people continue to come to him and glorify him, both in the suffering homeland and throughout the ends of the world where these people are scattered. Even other nations are becoming familiar with St. Seraphim; his Life is being translated into various languages, evoking not only admiration, but also, in many, the striving to apply in their own lives the lessons given to us by St. Seraphim’s life. Thus, despite the changes that have taken place in the world, the memory of St. Seraphim not only does not fade, but it remains a lamp that shines ever brighter to humanity.

It was the same during his earthly life. Cities were being destroyed, kingdoms were being established, Napoleon advanced upon Russia with twelve nations and then left in disgrace, Moscow burned and was again raised from the ashes, Decembrists organized revolts and were then sentenced; but was as if these events did not touch St. Seraphim.

He was wholly occupied with the acquisition of “the one thing needful,” worked on his “spiritual growth”. An “egoist, introverted,” “ignorant, not interested in anything other than what concerned him personally”—that is what many thinkers who do not wish to see even the slightest benefit in the podvig of self-perfection would say about him. So, monk Seraphim dies. It would seem that the image of this elder who so stubbornly fled the world should be erased from people’s memory. But an entire pilgrimage begins to his grave, people who come to him from all ends of Russia receive help, consolation, and edification; and the veneration of him begins to spread even among people of other nations.

In what lies the power of St. Seraphim? What is his podvig? He strove to realize the commandment of Christ: Be ye perfect, even as your Father in heaven is perfect (Mt. 5:48). He labored to restore in himself the first-created image of man, corrupted as a consequence of sin.

St. Seraphim reached his goal: he overcame sin and became a saint; he truly became the likeness of God. We cannot see the invisible God. But the Lord gave us to see Himself in those like unto Him, in His saints. And so, one of these likenesses was St. Seraphim. In him we see restored human nature, freed from slavery to sin. He is the incarnate personification of eternal victory over the transitory, sanctity over sin, good over evil.

St. Seraphim calls all by his example to follow the path shown by Christ. He calls us to struggle with sin and our inadequacies, being himself a beacon and lamp for all who seek salvation. St. Seraphim calls us to seek the higher good, spiritual fruits, about which the Apostle Paul said, But the fruit of the Spirit is love, joy, peace, longsuffering, gentleness, goodness, faith, Meekness, temperance: against such there is no law. And they that are Christ's have crucified the flesh with the affections and lusts (Gal. 5:22–24).

The path to the Heavenly Kingdom is hard, for sin has taken over human nature and spoiled it. Each of us has our own personal sins. There are also societal sins of which an entire nation is guilty. Thus, the entire Russian nation is guilty of the sin of abandoning the pious life and customs of its ancestors and seeking what is alien to it, not Orthodox; of believing the slander spread about God’s anointed one, and allowing them to first tear off his crown, and then kill the pious Tsar along with his entire family—the Tsar who was the first to fall down before the glorified relics of St. Seraphim. St. Seraphim calls all to repentance and correction of life, both personal and societal. Although this path is hard, the God-pleaser will help us to walk it. St. Seraphim is a beacon and lamp on this path; he is also our aid. By the prayers of Thy saint, our father Seraphim, Lord grant repentance and victory over sin to us sinners, and lead us to Thy Heavenly Kingdom. Amen. 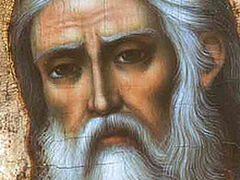 Greek Miracles of St. Seraphim of Sarov
As our Greek friends explained to us, very many people now know of Fr. Seraphim in Greece. Furthermore, the Russian Seraphim has become so dear to the hearts of simple believers that they take him to be their own Greek saint, and the less educated might even say that Sarov is somewhere in Greece. Nevertheless, it was not clear what made this particular church venerate him so, especially since it was located in “the boondocks”. 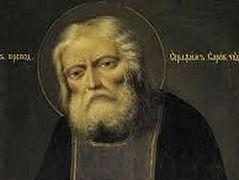 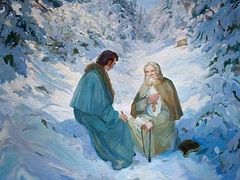 St. Seraphim's Transfiguration in the Holy Spirit
Conversation with Motovilov

St. Seraphim's Transfiguration in the Holy Spirit
Conversation with Motovilov
Then, bending his head towards me, he whispered softly in my ear: "Thank the Lord God for His unutterable mercy to us! You saw that I did not even cross myself; and only in my heart I prayed mentally to the Lord God and said within myself: 'Lord, grant him to see clearly with his bodily eyes that descent of Thy Spirit which Thou grantest to Thy servants when Thou art pleased to appear in the light of Thy magnificent glory.' 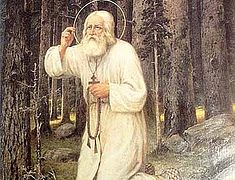 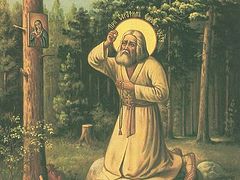 The Spiritual Path of St. Seraphim of Sarov
"He who truly loves God considers himself a wanderer and newcomer on earth, for in him is a striving towards God in soul and mind, which contemplates God alone." Certain people emerge as standouts in the church. Their chief characteristic is the search to live in the presence of God with every fiber of their being, and to recognize God's presence in creation and humanity. Such a saint was Seraphim of Sarov, author of the saying quoted above. 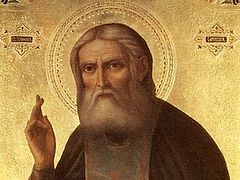 St. Seraphim on Monastic Life
From the book, St. Seraphim of Sarov, by Elena Kontsevitch
Elena Kontsevitch
“One distinguishing characteristic of the superior should be his love for his inferiors: for the true pastor, according to the words of St John Climacus, is shown by his love for his flock. For it is out of love that the Chief Shepherd was crucified on the cross.”
Comments