A unique relic is returned to the Patriarchal St. Nicholas Cathedral in New York 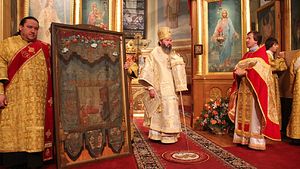 On the day of St. Nicholas’s birth, a unique relic was returned to Patriarchal Cathedral in New York—the holy banner of Brotherhood of the Nativity of the Mother of God, created in the late 19th century.

On August 11, clergy and parishioners of Holy Nicholas Patriarchal Cathedral in New York for the first time prayerfully honored the commemoration day of St. Nicholas’s birth. This feast day was known in Russia since the 15th century, but was not widely celebrated.

On this day the Administrator of the Patriarchal Parishes in the United States, Archbishop Justinian of Naro-Fominsk, served the Divine Liturgy, assisted by the cathedral clergy, as well as the rector of the Church of the Nativity of the Mother of God, and the New York Diocese of the Orthodox Church in America, Archpriest Joannes Prokopyuk.

After the Eucharist the Archbishop and clergy sang hymns to St. Nicholas in the center of the church, after which the Archbishop addressed the congregants with a short sermon:

"When we look at the canonical calendar, we unconsciously notice that that every day is the commemoration day of one or another saint. Sometimes there are dozens of saints, sometimes even thousands. After a careful study of the menologian we can see that in the calendar are shown dates of their death, not dates of their birth. The explanation of this fact is edifying: a person who died in faith, in pious labors for the sake of God, is made worthy of the Kingdom of Heaven and praise from people. Having reached the fullness of blessedness in the Heavenly Abode, that person who we call a saint has exceptional grace to pray for us and help us when we call upon him in our prayers.

A worthy exception to this rule is the feasts of the Nativity of Christ, of the Holy Mother of God, and of St. John the Baptist.

However, since the 15th century in Russia, where St. Nicholas the Wonderworker is so loved and honored, people began to celebrate the day of his birth because they believed that he was born through the special Providence of God. The circumstances of his birth from pious parents were truly wondrous and were accompanied by special signs, and all that led our ancestors to honor this special day with celebration. I am sure that from now on we will continue the tradition of celebrating St. Nicholas, and from year to year growing number of pilgrims will gather on this day."

For this festive day, at the request of the Archbishop Justinian and the blessing of the Bishop Michael of New York and New Jersey, after decades of absence, the banner of the Brotherhood of the Nativity of the Mother of God was returned to the cathedral.

The Archbishop learned about existence of this banner bearing an icon of the Nativity of the Mother of God from photographs taken in the early 20th century depicting Bishop Tikhon (Belavin) of the North America, the future Patriarchof Moscow and All Russia and builder of the St. Nicholas Cathedral in New York, Hieromartyr Alexander Hotovitzky, the builder of the cathedral in Chicago, Hieromartyr Archpriest John Kochurov, and holy righteous Archpriest Alexis Toth, who returned hundreds of Uniates to the bosom of the Orthodox Church in the United States. In this photo, clergy members of the Brotherhood of the Nativity of the Mother of God are pictured along with a banner, on which you can see the following words: "1893. Holy Mother of God, save our brotherhood! "

Having been invited last year to visit the Church of the Nativity of the Mother of God in New Jersey, Orthodox Church in America, Archbishop Justinian saw the banner on the right side of the iconostasis on the wall. A year later, after consultations and preparatory work, rector Archpriest John Prokopchuk, with the blessing of Bishop Michael, returned the banner to the St. Nicholas Cathedral. According to Fr. John, neither he nor his congregation knew about the banner’s history, and they believed that it had been donated to the church by an emigrant who brought it from Russia. 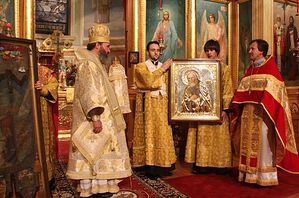 В знак признательности за хранение святыни Богородицерождественскому храму передали образ прп.Серафима Саровского
In recognition of appreciation for the careful preservation of this holy relic as well as of their brotherly love, Archbishop Justinian presented the congregation of the Church of the Nativity of the Mother of God with an icon of St. Seraphim of Sarov.

The banner was placed before the iconostasis of the side altar dedicated to the Nativity of the Mother of God as the troparion and magnification were sung, after which all had the opportunity to venerate.

The solemnities ended in the cathedral’s refectory, where clergy, parishioners and guests continued the conversation at the festive table. As is fitting for a birthday celebration, a birthday cake was prepared with the inscription: "Happy birthday, Saint Nicholas!” for all who came to honor St. Nicholas’s nativity, reports the press service of ROC Representative to the United States.