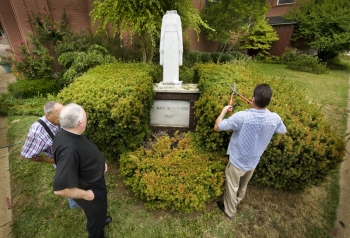 Getting ready for their parish celebration this weekend, St. Mary of Victories church maintenance man Mark LaBrier timmed hedges surrounding the statue of the Virgin Mary which was vandalized this past week. Father Brian Harrison, OS, and gardener Ernie Rohay talked about the shrine.

An elegant, life-size white statue of Our Lady sits on a pedestal in a small garden with well-kept greenery and flowers at Gratiot and Third Streets just south of Downtown.

"In the form of that image, the Blessed Mother has stood watch and welcomed for about half a century all who approach our historic church," wrote Father Brian Harrison, chaplain of St. Mary of Victories Chapel.

The statue, a "signature" feature of St. Mary of Victories, was vandalized sometime late Aug. 9 or early the next morning -- the head was sliced off and was missing.

On Aug. 13, people coming to an early Monday morning Mass found the head returned to the bottom of the pedestal, with Satanic inscriptions in red and blood drawn dripping from the corners of Our Lady's mouth to make her look like a vampire. Father Harrison described it as "a horrible act of desecration."

Father Harrison said he believes the vandalism is "a satanic hate crime." The police were notified when the crime was first noticed and again when the head was returned. Immediately, he said, the people of St. Mary's offered prayers of reparation and holy hour prayers for the perpetrator.

According to the St. Louis City Police Department, the vandalism happened sometime after 5 p.m. Aug. 9 and about 10 a.m. Aug. 10 when the police were called. The head was broken off and was missing initially, according to the police report. Detectives are looking into the crime and have called it an active investigation, with no leads reported yet.

A police spokesman said there is no indication of a hate crime and that right now it is being treated as a vandalism.

The concrete statue was bought by the church in the 1950s, Father Harrison said. It most likely can be repaired and repainted, but "we haven't even gotten around to" discussing it yet, he told the Review.

Mark LaBrier, who works in maintenance at the parish, said he and others were upset by the vandalism because of the significance of the statuary outside the parish.

St. Mary of Victories is the second-oldest church in the City of St. Louis, following the Old Cathedral on the Riverfront. The church originally was established in 1843 for German immigrants and experienced a rebirth of sorts in the 1960s, when it was designated as a spiritual and cultural home to the Hungarian immigrant community.

It remains the home of the Hungarian community in St. Louis, and it offers the only Latin Novus Ordo Sunday Mass in the Archdiocese of St. Louis.

The desecration occurred just as the parish was preparing for its homecoming picnic, set for Sunday, Aug. 19, following the regular Novus Ordo Latin Mass at 9 a.m. and Hungarian Mass at 11 a.m. A presentation was to be made in appreciation for the work of Ernie Rohay, longtime gardener at the parish. He said he is happy to accept the honor, noting that "I'll be here watering the plants."