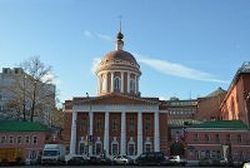 Russian Orthodox University and the Moscow Patriarchate's pilgrimage center according to a cooperative agreement will be giving short-term professional training to prepare Orthodox tour guides, in a class called, "Fundamentals of Orthodox culture".

The "Fundamentals of Orthodox culture" course consists of two modules--theoretical and practical ones--and includes 72 hours of lecture, seminar and practical work as well as independent preparation that increases the load to 100 hours. Separate educational modules devoted to Holy sites of Moscow, Russia, Greece, and Byzantine empire, and spiritual centers of Europe will be developed as part of the course.

The main emphasis of the program is the practical mastery of the methodology of pilgrimages and organizing excursions. A graduation document will be given out upon completion of the program. The best trainees will be offered job at the Moscow Patriarchate's pilgrimage center.

Theses courses for Orthodox guides are the first joint project of the Russian Orthodox University and the Moscow Patriarchate's pilgrimage center. The university and the center are also planning to hold jointly an annual conference dedicated to development of pilgrimages, and publishing theme guides on the holy shrines of Moscow and other Russian cities.

"There is a very high interest among tourists who come to the capital to visit the Moscow churches and monasteries, famous worldwide. Our university has taken part in the life of important Moscow shrines; each of them is an object of special attention to pilgrims, tourists, scientists, historians, local historians, and ordinary Muscovites who consider that it is their duty to know the history of their native city well," said the rector of ROU Igumen Peter (Eremeev).

"An acute problem of modern pilgrimages is a shortage of Orthodox guides. To be more precise, a shortage of highly skilled specialists in this field who have a relevant training and education. The full practical experience of pilgrimage organization that the pilgrimage center has gained will be shared with our trainees in professional development courses for Orthodox guides," comments the director general of the Moscow Patriarchate's pilgrimage center Hieromonk Nikodim (Kolesnikov).

The courses for Orthodox guides will begin on October 15, 2013. Lectures and practical workshops will be held in buildings of ROU and the pilgrimage center.