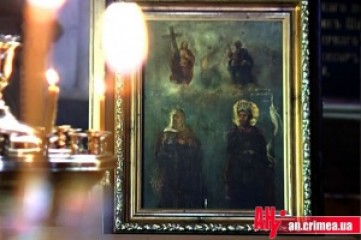 1.5 centuries after the Crimean war ended the trophies, stolen by the winners, have now been returned to the faithful.

Since September 6, two Orthodox Icons have been displayed in St Nicolas Church on the North side of the city. They will be available there for viewing till September 16 and then the Icons will be visiting various Churches and Cathedrals of Sevastopol. Members of "The heritage of St Clement of Rome" public organization found the Icons incidentally at one English auction, reports ForPost with the reference to Argumenty nedeli - Krym online newspaper in Sevastopol.

"We were astonished at the inscription that clearly and openly said that the Icons had been moved out of Sevastopol in September 1855 during the Crimean war" said the chairman of the public organization Vadim Prokopenkov.

The auction took place in a small town not far from the English capital.

The residents of Sevastopol took the opportunity, purchased the Orthodox Icons and brought them back to their motherland. They carried out necessary laboratory research and proved the Icons' authenticity.

But the attempt to determine their ownership proved to be not successful. Supposedly, the Icon with depiction of Holy Metropolitan Peter of Moscow was regimental and belonged to a "field" Church of one of military sub-units that arrived in Sevastopol. Police in Moscow find stolen old icon worth million dollars
The icon was stolen from a church in the Kirov Region, central European Russia. Albanian police confiscates over 100 stolen Icons
A police representative said that the stolen things had been intended for selling abroad.
×