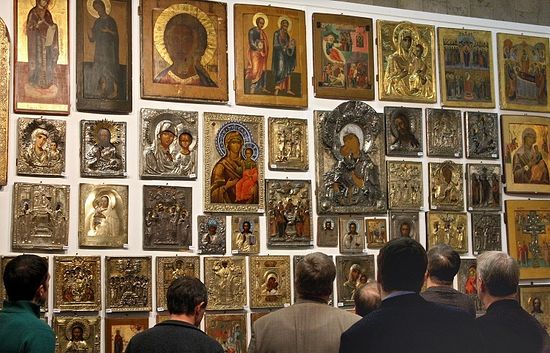 Moscow criminal police detectives have found a 16th-century icon worth one million dollars that was stolen a year ago.

The icon was stolen from a church in the Kirov Region, central European Russia, in September 2013. A criminal case was opened over the theft of a rarity.

The icon was found in a restoration shop in Moscow, police said.

This year, it is the third case when a stolen old icon is found.

In November, police in the Vladimir Region, Central Russia, found and returned to the church seven icons that were stolen in September.

A total of 130 icons have been seized during searches. The Russian Orthodox Church has awarded diplomas to detectives for the work.

In March, police in the Vologda Region, northwest Russia, returned to a church an old icon that was stolen in 2008.

The Moscow criminal police in February detained 17 members of an organized criminal group involved in robberies and thefts and seized eleven icons from them.

Icons take the largest part of the list of stolen valuables sought by Russian police. On the list are tens of thousands of icons stolen together with collections of paintings. Sometimes, it takes years to find them.

Police have marked icons with figures for the last seven years, in accordance with an agreement between the Interior Ministry and the Russian Orthodox Church. Albanian police confiscates over 100 stolen Icons
A police representative said that the stolen things had been intended for selling abroad. Stolen St. Nicolaos Icon Found in German Gallery
An icon of St. Nicolaos, stolen eight years ago from the Goudovasdas Monastery in St. Paraskevi, in Kalomira, and the Kalambaka area of Greece, has been found in a gallery in Germany, officials said. Stolen Greek relics found in London
Six stolen icons discovered in an art gallery near the Greek embassy in London have become the focus of a police inquiry as Athens tries to unravel how the religious works ended up on the international art market.
Comments
×