What Scientists Have Said About the Miraculous Chapel of St. Theodora in Vasta 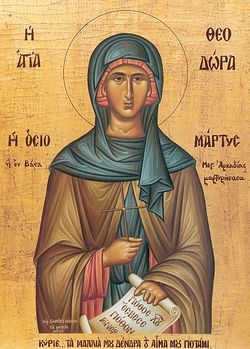 What we know of the life of St. Theodora of Vasta comes entirely from local tradition, but her little chapel in southern Greece is known throughout the world and visited by thousands every year.

The Chapel of St. Theodora dates approximately to the 12th century and it is entirely made of stone. What is extraordinary about this church however is that there currently grow 17 enormous trees on the roof of this small structure. Most of them are over 30m high, and some of them are over 1m in diameter. Many of the trees weigh over 1 ton. Yet, even if the roof of the little church is thin and without any special support, it remains standing for centuries now as if by a miracle. Scientists have studied the case and they confess their inability to explain how the trees grow on such a thin roof, without destroying the church. The little church is under great pressure, and over time some minor restoration has been necessary, but that is mainly due to the curiosity of some inexperienced people who have tried to “understand the mystery”. Unprofessional interventions have affected the church’s architecture, though only to a small degree.

According to tradition, St. Theodora, prior to her martyrdom, prayed: “May my body become a church, my blood a river, and my hair trees.” Today this is exactly what one sees when visiting this holy shrine. On the spot where her martyred body is said to lay, locals built a church in her honor. A river also runs beneath this chapel and the trees have grown above it. 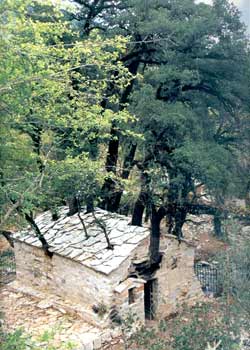 The little church is currently under the protection of the Metropolis of the region, as well as under that of the Minister of Culture as a Byzantine monument of national value.

Believers without hesitation see this church as an unexplainable miracle, celebrating the feast of St. Theodora annually on Bright Tuesday for centuries, until 1956 when her feast was transferred to September 11th, due to a certain resemblance in story with St. Theodora of Alexandria who is also celebrated that day.

But what do scientists say about the miracle in Vasta?

In 2003, at the Fourth Symposium of “Archaeometry” in Greece, ageophysical report on the little church in Vasta was presented. Researchers from the University of Patras came to Vasta especially to study “the miracle”. They decided to make an ultrasound test, and to analyze each part of the walls. The results of the research offered the researchers the necessary answers in order to receive the approvals needed for the complete restoration of the monument. They observed how the roots have grown through the small free spaces in between the stones of the wall, all the way to the ground. The walls are under constant pressure, and the building has become “a living body”.

The archaeological findings led to the same conclusion: the way the roots have followed this path and the fact that the church and its roof are untouched appear to be in fact a miracle, which is unique in this world, and unexplainable.

Eleftherios Beligiannis, an Engineer from Athens, said in 1986: “Since the winds that blow in that area have the power to uproot trees, it is clear how much force the 17 trees press upon the roof”.

Loukos Constantinos, a Geologist of Corinth, said in 1987: “There is no geological explanation. It is a continuous miracle”. 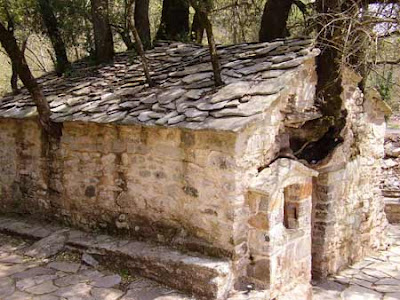 George Raptis, a Silviculturist of Nafpaktos, said in 1992: “The entire phenomenon is beyond any of man’s logical, natural and scientific explanations”.

Eleni Stavrogiannis-Perry, an Architect from Kalamata, said in 1993: “The phenomenon is scientifically unexplainable. Considering the position of the church, its temporary construction and its age, the heavy weight and the winds should have gradually destroyed it. But it is still standing, after so many centuries, without any serious damage”.

Anastasios Tinkas, an Archaeologist, Historian and Theologian from Attica, said: “The entire growth, existence and life of the trees on the roof of the little church of the pious martyr Theodora is amazing, beyond any man’s natural reasoning and explanations. This shows a rare characteristic: God’s intervention for His creature, the making of the miracle”.

Mr. Pallas, Director of Antiquities from Athens, said: "Under the laws of nature, at least the large trees, because of the slope, height and perimeter, should have destroyed it. To stand imperiously, is something that science cannot give an explanation".

P. Makrigiannis, a Geologist, said in 1993: “Seventeen giants supported on nothing! All these huge trees are rooted on nothing, or better said, on a roof which is only a few centimeters thick! However, the biggest surprise awaits us inside. There is not even the smallest root coming through the old walls. There is no crack caused by them! When the wind blows through one of the huge trees of the church, its roots form such strong levers, that the small settlement should crash immediately. As a geologist, I know very well that the walls should have been crushed and broken down only under one tree, and they are seventeen!"

It should be noted that this church is also in the Guinness Book of World Records as a miraculous wonder. 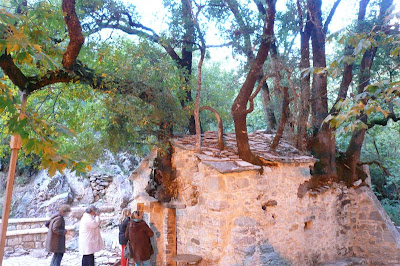 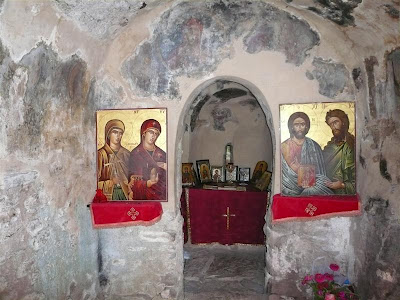 St. Theodora of Vasta, Warrior of Honor
Near the village of Vasta in the Peloponnese, there is a miraculous site that defies human logic. The lush green mountain gully with a river flowing through it is visited by many pilgrims, as well as by those curious to see how seventeen trees can grow from the thin roof of a small chapel. It all goes back to the life of a brave young girl who lived in the Byzantine Empire.
Comments

Nicoleta9/15/2014 2:59 am
I love our God, His Son, and his Mother Mary...I love all who lived without sin...I am so amazed yet not surprised...I have witnessed miracles and am forever grateful...I look for the resurrection of the dead and the life of the world to come...I pray more gather in praise and humbly submit to God's will...This is a beautiful account of His mighty glory...I love the interior of Gods castle...Blessed are all who actually go there but so are we who can partake of its mystery through an e-mail...Thank you to the Monastery of the Transfiguration in Ellwood City, Pa, USA...

zaharoula9/13/2014 7:25 pm
I CANNOT WAIT TO GO & SEE THIS ENCHANTED HOLY TEMPLE.. MY DAD HAD GONE THERE & HE WAS OVERWHELMED EVEN THOUGH HE WASNT MUCH OF A BELIEVER… GOD IS THE ONLY WAY FOR US TO SEE THE TRUTH.IF WE WISH TO REMOVE OUR VEIL THAN WE CAN CLEARLY SEE HIS MIRACULOUS WORK...

Jenny alexopoulos9/13/2014 2:10 pm
Am so privileged to have read this and hope one day to have a chance to stand under her May God bless us all always

LEIGH TRENHAM5/31/2014 2:23 am
I agree with Samuel Shen. This is continuing testimony that our God is great and wonderful, and that righteous prayers are answered. I was blest to receive this email.
Thank you.
Leigh Trenham
St. Andrew Orthodox Christian Church
Riverside, Ca., USA

Samuel Shen2/10/2014 2:03 am
It is common to see grass,small plants & vegetable cultivated on flat roof,such small farming on a roof of concrete building, the roof must be reinforced and waterproof material applied but BIG, matured TREES on a primitive thin roof, unheard of ! Our God had truly granted the prayer of his servant: "Let my body be a church, my blood a river & my hair,trees", Halellujar! To God, all things are possible! God is Great!
Therefore, this Trees on top of a 900 age old stone church serve to be a constant reminder to all Christians that our Jehovah is Great & Wonderful !!

Helen 9/26/2013 10:35 pm
That there are no tree roots to be seen on the inside of the structure is truly miraculous. I initially thought that naturally the roots of the trees would have gone through the structure into the ground but apparently that is not the case. Only God has the power to accomplish such things.
×