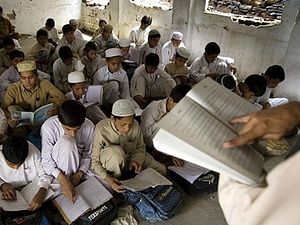 There’s a simple reason why attacks on Christians in Pakistan, like the Sept. 22 incident when two Taliban suicide bombers blew up themselves – and 80 Christians – at a church in Peshawar, happen: The nation’s education system.

According to a new report from the Middle East Media Research Institute the textbooks used in public schools across Pakistan teach that killing Christians is a goal and martyrdom is to be sought.

The report by Tufail Ahmad, the director of the organization’s South Asia Studies Project, noted that Ahmad Marwat, a spokesman for Jundul Hafsa, commented about the attack on Christians.

Jundel Hafsa claimed credit for the deadly bombing of Christians at the 130-year-old All Saints church and Marwat explained, “They are the enemies of Islam; therefore we target them. We will continue our attacks on non-Muslims on Pakistan land.”

The MEMRI report explained, “In Pakistan, where Islamist groups are launching regular attacks against non-Muslim Pakistanis like Christians and Hindus as well as some sects of Muslims such as Shiites and Ahmadi Muslims, whom they do not consider to be real Muslims, the official and unofficial media, government leaders and religious scholars have legitimized hate against religious minorities, with the term ‘minority’ itself having come to be seen in a pejorative context.”

The report continued, “As a result of such legitimization of hate through school textbooks, government policies, sermons in mosques and religious congregations, there is growing persecution of Pakistani Christians, Hindus, Shias and Ahmadi Muslims.”

Shah Farman, an official for a regional political faction, said, “Jihad is part of our faith. We will not back down,” the report said.

Specifically, the MEMRI report explains that an assessment of school texts in Pakistan found that they “nurture Islamism and promote hate and jihad among students of primary schools and disturbingly even non-Muslim Pakistanis have to go through this daily school ordeal from early childhood.”

That’s from the evaluation titled, “The Subtle Subversion – The State of Curricula and Textbooks in Pakistan” by A.J. Nayyar and Ahmad Salim and published by the Sustainable Development Policy Institute.

It reveals that the nation’s 2002 National Early Childhood Education Curriculum requires, “To nurture in children a sense of Islamic identity and pride in being Pakistani.”

At the same time, for Class IV and V students, one Pakistani curriculum demands, “A feeling be created among students that they are members of a Muslim nation. Therefore, in accordance with the Islamic tradition, they have to be truthful, honest, patriotic and life-sacrificing mujahids.”

A curriculum dated 1995 demands that students “Try to adopt principles of Islamic way of living,” and “love Islamic traditions,” the study said.

A Class 5 text said students must learn “stories about the Pakistan movement, eminent personalities of Pakistan, and martyrs of Pakistan” as well as “simple stories to urge for jihad.”

Further lessons demand students know “the blessings of jihad, and must create yearning for jihad in his heart.”

The authors, Nayyar and Salim, concluded, “The… disturbing part of this is to make the non-Muslim students read the Quran, not in Islamiat [Islamic Studies] which they are not required to learn, but in the compulsory subject of Urdu. Urdu textbooks from Class I to III, which are compulsory for students of all faiths, contain lessons on learning to read the Quran. Progressing from Class I where Arabic alphabets are introduced in a lesson titled Iqra, to the lesson entitled ‘E’rab’ on punctuations in a Class II Urdu book, to the lessons in a Class III Urdu book entitled ‘Quran Parhna’ (reading the Quran), which has seven lessons (out of a total of 51) on learning to read the Quran. The non-Muslim students must learn these lessons and prepare them for examinations also.”

MEMRI’s report said, “Throughout Pakistan’s history, since its creation in 1947, hate speech against non-Muslims has been a normal phenomenon in Pakistani society. In August-September 2013, a Lahore Grammar School received backlash for introducing a supplementary course titled ‘Comparative Religion’ which was designed to ‘educate about Islam, Christianity, Buddhism, Zoroastrianism and Hinduism.’”

The result, according to journalist Maheen Usmani, is that there’s a generation of Pakistanis who now identify more with Islam than Pakistan and 14-year-old students now are being taught “one of the reasons for the downfall of the Muslims in the sub-continent was the lack of the spirit of jihad.”

And 13-year-olds are taught, “In Islam, jihad is very important … The person who offers his life never dies.”

And those lessons are the ones in public schools, while thousands of unregulated Islamic seminaries for children may take even stronger stances on jihad, the MEMRI report said.

Another report, from the National Commission for Justice and Peace, a nongovernmental organization working on behalf of religious minorities in Pakistan, said religions other than Islam, if mentioned, “are dealt with contempt and biases. … Hate materials and religious discrimination are still part of curricula in languages, social studies, geography and history.”

A grade 5 lesson teaches “A selfish Jew was the owner of a well and he never allowed Muslims to take water from it,” the report said.

The MEMRI reported noted that while a previous secular government tried to remove some jihadi promotions in textbooks, the current power structure is working to return them. Report: 128 Christians killed in last year in Pakistan
The United States Commission on International Religious Freedom has published a brief report on violence against religious minorities in Pakistan. Pakistani authorities confiscate 10 properties from Christians
Pakistani Catholics are protesting against the confiscation of property from Christian communities in the Punjab province.
Comments
×