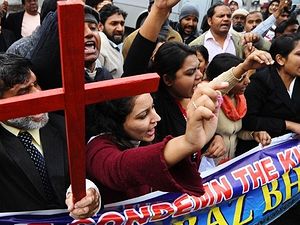 Pakistani Catholics are protesting against the confiscation of property from Christian communities in the Punjab province. Altogether 10 items of property, including churches, schools, hospitals and cemeteries, were taken away from Christians, reports Sedmitza.ru, citing Fides.

On June 15, over 1500 Catholics protested against the confiscation of property from the school of St. Francis in Lahore, carried out by the Punjab authorities. Archbishop Sebastian Shaw of Punjab headed the demonstration.

The disputable plot of land is situated in the Anarkali district. The reason for its confiscation as well as of nine other items was cross political interests and speculation in real property.

The recent negotiations with the authorities did not yield results; that is why the Catholics brought themselves to arrange the protest action.

General Vicar of Lahore Priest Andrew Nisari in connection with the latest events has noted the fact that since the foundation of the state of Pakistan in 1947, Christians have played a leading role in the development of education. The majority of political leaders studied precisely in religious institutions. In spite of this important contribution, the authorities deny the role of the Church in education. Pakistan: over 40 people arrested in killing of a Christian couple
According to the media reports, the Prime Minister Muhammad Nawaz Sharif made a special statement in connection with the crime that had shaken the whole of province Punjab.