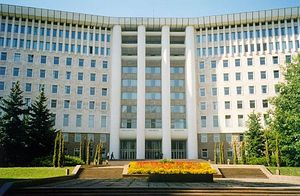 Several dozens of Moldovan priests and their flock blocked the entrance to the Palace of the Republic, the seat of the national parliament, on Friday.

Deputies, journalists and parliament administration workers were unable to enter the building. The priests demanded that the amendments to the Moldovan Code of Administrative Offices, which abolished penalties for propaganda of homosexuality, pedophilia and sex outside of marriage, not be passed.

Deputies of the opposition Party of Communists support the protesters.

The parliament meeting was thwarted.

The Concepts of “Mother” and “Father” abolished in Moldova
As stated in the bill, the existing wording “mother (father)” is replaced by the wording “one of the parents.”