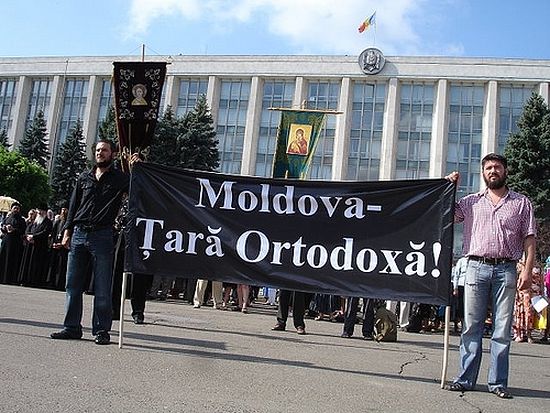 An appeal has been published on the official website of the Orthodox Church of Moldova.

Beloved in Christ brothers and sisters!

On May 23, 2015, the fullness of the Orthodox Church in Moldova will participate in the prayer rally in support of the traditional family – a family in which from generation to generation children are raised in love for God and in respect for their motherland and traditions, thus finding hope for a prosperous future.

We firmly believe and know that it is the family in its traditional understanding that in full measure reflects the teachings of the Orthodox faith, thus contributing much to the formation of any society, based on the fundamental moral values which further normal development not only of any individual nation but also the continuity of mankind.

Today, as never before, we need to show that we are united around one main idea whose aim is to prove that we are not indifferent to our present and future and that the past is not forgotten either.

We are calling upon everybody, young and old, to gather on Saturday, beginning from 10:00 AM, in front of the Monastery of St. Theodore Tyron in Chisinau. Headed by hierarchs of the Orthodox Church of Moldova, we will take part in the peaceful prayer rally, in the spirit of Christian love and setting all our hopes upon the Lord’s help. We will demonstrate that we are enthusiastic about and capable of defending our common precious values; for, the primary aim of each of us is to preserve these values unchanged and to pass them on to the future generations. The culmination of our procession will be veneration and laying of flowers at the monument to the Holy Right-Believing Stephen III the Great, Prince of Moldavia (reigned from 1457 till 1504; feast in the Romanian Orthodox Church: July 2) which will be followed by a thanksgiving service to the Lord for all His mercies upon our pious nation!

He is Risen Indeed!”

In May 2012, the Parliament of Moldova passed the Law on Enforcement of Equality. This was one of requirements of the European Union for the plan on EU visa liberalization. Passing of this law was more than once delayed and the law’s name was changed many times, reports Interfax-Religion. The same laws are adopted by governments of many states wishing to join the EU. The first such country was Romania; this law was also enacted in Greece and Georgia.

In 2013-2014, activists in Moldova frustrated several demonstrations by representatives of sexual minorities. Romanian Patriarchate calls on Lower House to reject legislative proposal on civil partnership
According to the cited source, “ever since the oldest times, the Romanian people have cultivated the legacy of utmost respect towards the family, called the Church at Home, being satisfied that this is instituted and blessed by God.” Thousands march in US capital against gay marriage

Thousands march in US capital against gay marriage
Several thousand people including religious leaders marched in Washington on Saturday against same-sex marriage as the US Supreme Court prepares to hear arguments on the deeply divisive issue in the coming days. Despite 16,000 Strong Protest, Gay Parade Was Held In Belgrade Last Sunday
"7000 police officers plus the army and armored vehicles with a helicopter were deployed to protect 200 gays from the Orthodox Serbian people."

The Concepts of “Mother” and “Father” abolished in Moldova
As stated in the bill, the existing wording “mother (father)” is replaced by the wording “one of the parents.”
Comments
×