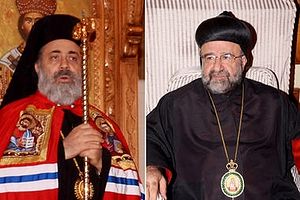 Grand Mufti of Syria Ahmad Badreddin Hassoun stated that, according to his information, the two Christian leaders from the Syrian city of Aleppo who had been kidnapped in April are alive, reports Interfax-Religion.

"According to the information of the Mufti, they are currently on the territory of Turkey. According to him, Chechen militants and Turkish intelligence services that are connected with them were responsible for the kidnapping," reported the deputy chairwoman of the Imperial Orthodox Palestine Society Elena Agapova to Interfax-Religion, resuming the meeting of the IOPS representatives with Mufti Hassoun in Moscow.

As E. Agapova noted, the Syrian Mufti believed that the reasons of the kidnapping were probably the claims of Turkey on moving of the See of the Patriarchate of Antioch from Syria to Turkey and thus an attempt to exert pressure on the Patriarch of Antioch and all the East.

In April 2013, militants of armed Syrian opposition near Aleppo kidnapped the brother of Patriarch of Antioch John X Metropolitan Paul of Aleppo and Syriac Metropolitan Johanna Ibrahim of Aleppo. Their driver, a Deacon, was killed. They were working on resolution of humanitarian problems of the local population in the village of Kafr Dael, situated approximately at the border between Syria and Turkey. One of metropolitans kidnapped in Syria treated in Ankara, then returned to kidnappers - Syrian mufti

One of metropolitans kidnapped in Syria treated in Ankara, then returned to kidnappers - Syrian mufti
The Supreme Mufti of Syria Ahmad Badreddin Hassoun claims that Turkey is involved in the abduction of two Christian leaders of the Syrian city of Aleppo.