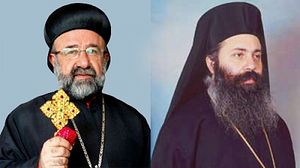 The whereabouts of two Syrian Metropolitans, who were kidnapped in April this year, has almost been determined. "Indirect negotiations" with the kidnappers on release of the Bishops have begun, reports Blagovest-Info.

This was reported by general Abbas Ibrahim, chief of the Lebanese security service, who also stressed that the situation surrounding release of the abducted Metropolitans was "very difficult".

"About a month ago I had a contact with a person who told me where the Metropolitans Paul Yazigi and Johanna Ibrahim were,” said general Ibrahim. “We started negotiations for their liberation. At the moment we are holding indirect negotiations with the abductors, and that is very important for achieving the results we hope for".

Two Metropolitans of the Syrian city of Aleppo (Haleb)— the Orthodox Hierarch Paul Yazigi (brother of Patriarch of Antioch John X) and the Syriac Hierarch Gregorios Johanna Ibrahim—were abducted on April 22 not far from the border between Syria and Turkey. Nobody has claimed responsibility for the kidnapping since then.

Last week, during the negotiations in Doha (Qatar), in which the present Maronite Patriarch Bechara Boutros al-Rahi and general Ibrahim participated, the emir of Qatar Tamim bin Hamad Al Thani said that he would do his best to effect the release the kidnapped Metropolitans. Two Bishops Kidnapped in Syria Held Captive by ISIL, in 'Good Health'
According to a report published in al-Akhbar newspaper on Saturday, the two bishops are “in good health” and are currently detained in the region of Tal Abyad, which is located in north of Raqqa governorate, near the Turkish border.