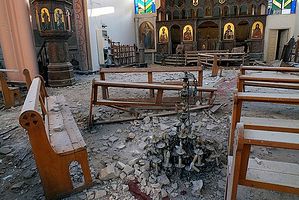 Antti Korkeakivi, the head of the department of indigenous people and minorities at the United Nations has said that "serious violations against Christians in Egypt and Syria" have been recorded.

"The challenge before us is a great one, especially if we look at the data relating to those violations, which date back to 2011," Korkeakivi told Mideast Christian News.

He pointed out the need to discuss the plight of religious minorities and the need to have security forces monitor the situation more closely.

Korkeakivi called upon Copts and civil organizations to file complaints to the U.N. in order to act in accordance with the international treaties ratified by Egypt in this regard.

"The international organization asked the Egyptian government to allow its special rapporteur on the affairs of minorities and indigenous people to visit Cairo, to witness the suffering of Copts. Yet, the government didn't respond," U.N. Official, Dolores Infante, told Mideast Christian News.

There has also been talk that any monetary help going to the Middle East and North Africa should be in exchange for the guarantee of the safety of Christians.

According to Moscow News, Boris Balashov, of the Russian Orthodox Church, stated, "It's important to take realistic measures to face the persecution of Christians, which continues to spread across the Middle East."

"In 2011, the European Parliament had decided that any aid to countries where Christians' rights are violated, whether monetary or humanitarian aid, should be made in exchange for guarantees of the safety of its Christian citizens," Balashov added.

He stated that Christians suffer various forms of harassment and violations across the Middle East and North Africa, pointing out, "International media is ignoring the matter."