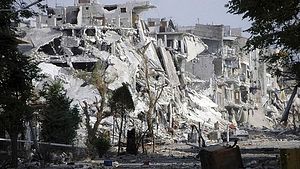 Over 100,000 people have died since the fighting in Syria began in 2011. Photo: Flickr / Rami Alhames
The Russian Orthodox Church announced it intends to participate in the second International Meeting of the Clergy on the Settlement of the Syrian Crisis.

The meeting will be organized by the World Council of Churches before the Geneva 2 conference in late November.

Metropolitan Hilarion, the Russian Church's spokesperson, said extremists in the Middle East are exterminating Christians in the region in order to erase Christianity's presence there.

He urged world powers to confront extremism and protect Christians in the Middle East.

According to RIA Novosti on Friday, Metropolitan Hilarion said, "I think we will participate in this meeting if the balance of powers is taken into account appropriately."

"It is important for the Russian Church to help launch negotiations between the parties in the Syrian conflict," he added.

The metropolitan added that the Orthodox Church believes there is no other solution to the Syrian crisis and strongly opposes any foreign interference in the situation in Syria.

"We opposed the U.S. strikes on Syria, and the joint efforts of clerics and politicians contributed to repealing this plan," he noted.

He added the situation in Syria is still far from a solution and expressed his hope that the organization's influencing the efforts would help resolve the Syrian crisis and take part in the new Geneva clergy meeting.

"The World Council of Churches is making every effort to turn the situation in Syria to the course of peace," the Russian metropolitan said.

The Russian Church spokesperson also called on Muslim clerics to activate their efforts to counter extremism in order to avoid the outbreak of religious conflicts. Militants burn down Church in a frontier town Tel Abyad in Syria
The arson of the church was preceded by an act of vandalism: the extremist had stolen precious vessels, while crosses and icons had been cut into pieces and broken down.
×