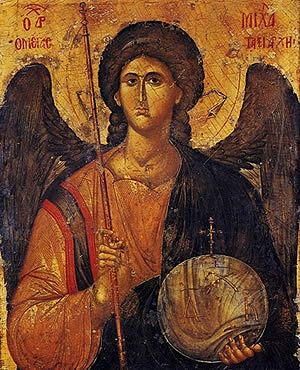 Archangel Michael. Greek icon, XIV century
Angels were created as messengers of God. The Scriptures reveal that God created nine orders of angels: Seraphim, Cherubim, Thrones, Dominations, Principalities, Powers, Virtues, Archangels, and Angels. Out of this order come the familiar seven Archangels which include Michael, Gabriel, Raphael, Uriel, Raguel, Sariel, and the fallen Lucifer. Before outlining the roles of the two that have been most prominent with man in the divine plan of the universe, it is required to cite him who has been the source of evil in our world with whom others, divine and mortal have had to contend with over the centuries since the dawn of man.

Lucifer, whose ambitions were a distortion of God's plan, is known to us as the fallen angel, with the use of many names, among which are Satan, Belial, Beelzebub and the Devil. An outcast since his expulsion from Paradise, this force of evil has been a thorn in the side of mankind and in all probability responsible for the miseries which Christianity has been striving to eliminate throughout the world.

The Archangel Michael is the outstanding figure in the eyes of the Greek Orthodox Church and is depicted in the many houses of worship in an icon always on the extreme left where he is pictured as a guardian of Paradise from whence Adam and Eve were evicted. In some icons he is seen with a flaming sword as a symbol of the righteousness that called for the casting out of the Garden of Eden of Adam and Eve after they had fallen victim to Satan in the form of a serpent. Among other things, it was Archangel Michael who was sent by God to countermand the command of God himself that Abraham sacrifice the life of his own son Isaac. Archangel Michael was also the messenger who warned Lot to flee from the wicked cities of Sodom and Gomorrah.

Archangel Michael's involvement with mankind is also seen in other ways, including his protection of Jacob from the wrath of his brother Esau over a matter of inheritance for which there are probate courts today. The Scriptures also tell us that it was Michael who battled the Devil for the soul of Moses following the death of the founder of the Israel nation. The Devil based his claim on the soul of the great Moses on the basis of Moses having killed an Egyptian prior to the Exodus, but the defence of the monumental figure of the Bible by Michael saved the soul of Moses from the clutches of Satan.

We are further told that it was Michael who stood by Joshua during his first encounter with his enemies in the land of Canaan. Mentioned in the New Testament numerous times, in which his lofty position is recognised, accounting for many miracles recounted as being attributed to the handiwork of Michael, chief of which is the changing of the course of a river at a place called Chonais in Asia Minor.

Michael's many miracles are commemorated by the church on September 6 of each calendar year.

A sweep of the eyes to the other end of the icon screen in Greek Orthodox churches falls on the Icon of St. Gabriel, seeming like twin sentinel with Michael over all mankind. Gabriel's name is synonymous with redemption, particularly since he was chosen to be sent by God to bring the electrifying news to the Virgin Mary that she was about to become the mother of God. What ensued changed the course of history and brought the promise of the deliverance of man through Jesus Christ. On the left is the symbol of guilt, on the right the symbol of salvation and between those can be seen the inspiring spiritual greats who have woven an enduring fabric to clothe all mankind and keep him from exposures that are life threatening.

Few are aware of the assignments of the lesser known and not so often mentioned saints, aside from Michael and Gabriel and the fallen one. Scant mention is made of the others but much could be made out of their responsibilities as ordained by God through painstaking study of Scriptures which the average reader overlooks because of what is considered more interesting or engrossing. Gabriel is principally mentioned in the Book of Daniel but there are others who have been mentioned who could do with considerably more attention.

Too little is said of Raguel, who is in charge of the spirits of humans but Sariel, whose duties are not defined whose role as avenger upon the world of lights is somewhat confusing. This brings us down to Sariel, whose duties are not clearly defined. However there is a clear definition of Uriel's role as leader of angelic hosts who guard the underworld (Sheol). Together this holy group is honoured with a feast day on November 8. Pakistan: The Feast of the Holy Archangel Michael and the Bodiless Powers
Fr. Joseph Farooq

The Feast of the Holy Archangel Michael and the Bodiless Powers
St. Sergius Orthodox Church in Sargodha, Pakistan
Fr. Joseph Farooq
It was a large gathering—almost 110 orthodox faithful and forty Catechumens joyfully participated in the celebration. This day is much blessed and honored by the orthodox faithful in Pakistan because the ROCOR Mission was named, “St. Michael the Archangel Orthodox Mission in Pakistan.” The defeat of the dark side: Orthodox church celebrates Michaelmas
According to the Christian Orthodox Church, Saint Michael is one of the seven primary angels, who is always standing besides God's throne.

The Archangel Michael Operated On Me!
Archimandrite Daniel Sapikas
Through a cloud I watched and listened to what was happening in the operating room, and the suffering was great. As a physician, I understood very well how critical my condition was.
Comments
×