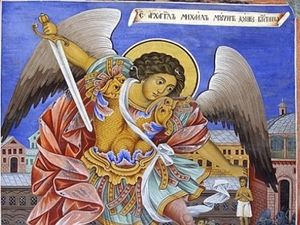 The Orthodox Church celebrates the Feast of Michaelmas or St. Michael on November 8. In Christianity, the Archangel Michael is the greatest of all the Archangels and is honoured for defeating Lucifer in the war in heaven.

As such, this day in the Orthodox belief is dedicated to defeat the "dark side".

Archangel Michael is the "guardian of the souls and fighter against evil." He is often painted with a fiery sword and spear, which pierces the devil. He is also perceived as an angel of death by the Bulgarian folk culture: Michael is believed to take the soul of any dying man, by handing him an apple.

According to the Christian Orthodox Church, Saint Michael is one of the seven primary angels, who is always standing besides God's throne.

The Bulgarian Police celebrate the day of Archangel Michael or Michaelmas as their professional holiday.

During the Middle Ages, Michaelmas was a great religious feast and many popular traditions grew up around the day, which coincided with the harvest in much of western Europe. In England it was the custom to eat a goose on Michaelmas, which was supposed to protect against financial need for the next year. In Ireland, finding a ring hidden in a Michaelmas pie meant that one would soon be married.